Why "Beowulf" Is An Epic Hero?

What is your definition of a hero? A hero to me is someone who has superior qualities and takes risks to stand up for what he/she believes in.
, my modern-day Beowulf is Martin Luther King Jr. ( a civil right activist), the reason I chose him is he stood for what he believed in, and he never let anything or anyone gets in his way. The characteristic traits I loved about Martin Luther King Jr. is his bravery, his courageousness, his loyalty, and his intelligence.

Don't use plagiarized sources. Get your custom essay on
“ Why “Beowulf” Is An Epic Hero? ”
Get custom paper
NEW! smart matching with writer

The similarities in Beowulf and Martin Luther King Jr. are the same, they stood up for their people and did what was right for their society. One of his most prominent speeches “I have a dream,” affected the world in so many ways. According to Social Studies For Kids, it states, “ It brought even greater attention to the Civil Rights Movement, which was going on for many years. It made Congress move faster in passing the Civil Rights Act.

This set of laws was finally passed the next year, in 1964. Many of these laws gave African-Americans more equal treatment than they ever had before.”

However, my modern-day Grendel is the KKK ( Ku Klux Klan ). The KKK did not agree with anything MLK had to say, they loved how segregated everything was and wanted it to stay the same. One thing I can say about the Ku Klux Klan is they fought together and stayed loyal. They used violence to send a message they did not have any mercy on anyone against them or different skin color as them, according to History it states, “ The civil rights movement of the 1960s also saw a surge of Ku Klux Klan activity, including bombings of black schools and churches and violence against black and white activists in the South.

Meanwhile, Martin Luther King Jr. was brave, and he stood up for what he believed in just like Beowulf. He had a voice and was not afraid to use it, he became a great orator and a remarkable leader. He used his voice to make the world a better place for African- Americans, Asians, Whites, etc. One of his quotes from his “I Have a Dream” speech that showed why he cared and why he wanted the world to be a better place to live, “I have a dream that my four little children will one day live in a nation where they will not be judged by the color of their skin, but by the content of their character.”

Eventually, as a final point, Beowulf in the story and my modern-day Beowulf really had all the great qualities of an epic hero. They both performed many brave and good deeds, risked their lives to have a greater society, and were glorified by all citizens to this day. People had a great love for Martin Luther King Jr. and his bravery. Martin Luther King’s accomplishments were talked about among all people and he is so many people heroes. Despite Martin having enemies he overcame that obstacle and continued to persuade people to do right and fight for equality. 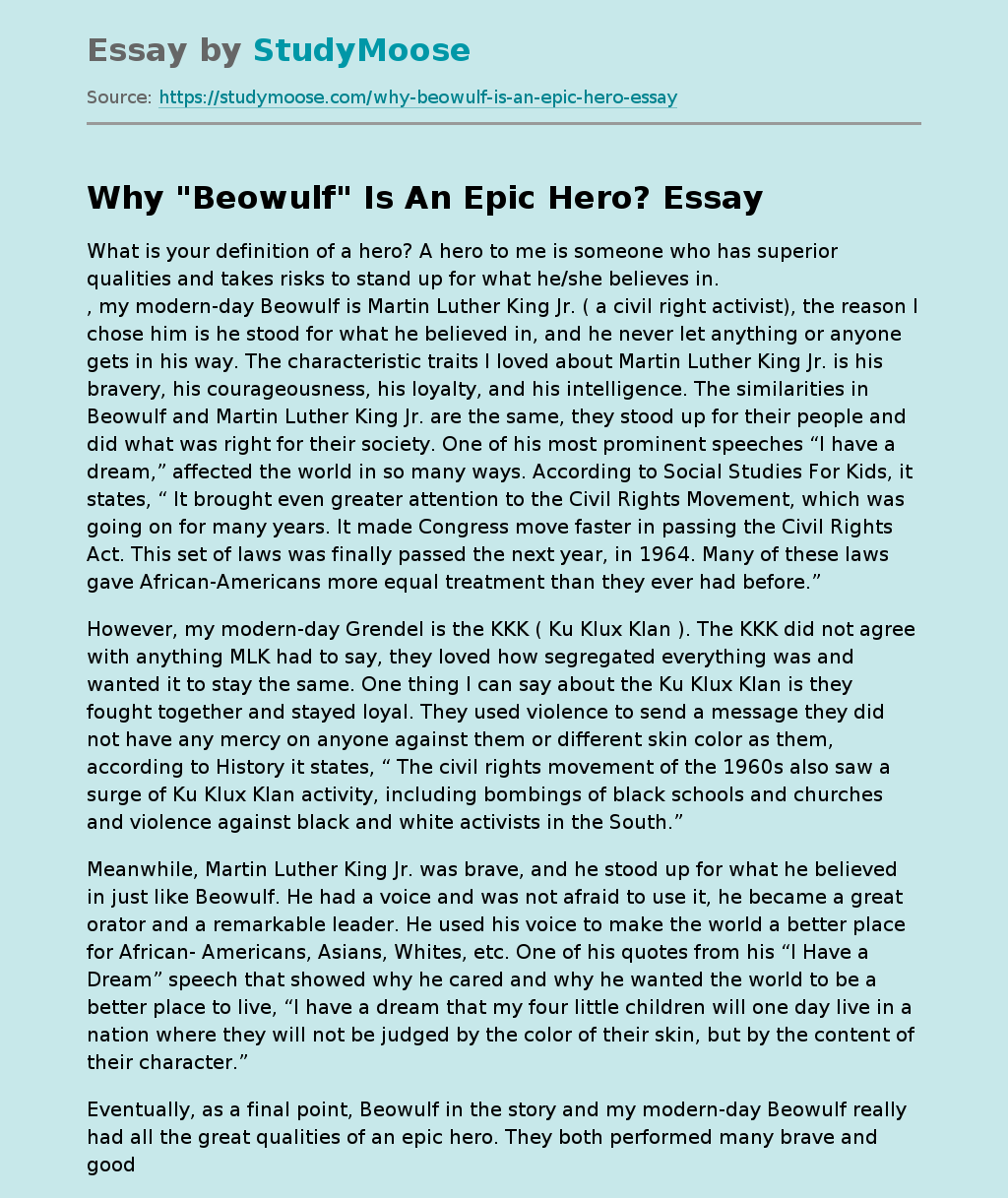