Why are some countries more developed than others?

Don't use plagiarized sources. Get your custom essay on
“ Why are some countries more developed than others? ”
Get custom paper
NEW! smart matching with writer

The uneven development exist between nations are mainly believed by majority to result from geographical features of the areas and political tendency rather than other factors. Personally, I believe that the root causes of such uneven development are seen into three factors.

Political situation must be one of most important reasons led to the unequal development among nations. Political stability brings a country the interest of foreign investment which plays a very important role in driving the country to economic boom.

Political security builds trust of the investors and gain attraction of the world multi-nation companies whose only fear of business rise caused by the country’s political unrest brings in employment opportunities available for thousands of people, decrease of poverty, increase of government’s budget, and especially the development of the whole county. For example, China’s political policy open-free-market, which allows foreign investment to the country, has made China the world’s most powerful economic country, and also become one of the G-20.

However, the instability in politics including war corruption, medicone governance would give the country negative result. Wars serve both local and foreign investors, corruption affect rivalries free market, while governance’s disability weakens investors trust. Seeing high risk of business failure, local and foreign merchants have to turn to other countries with better political situation. Their money is also taken simultaneously along with the development for while a country is waiting. Nigeria is an example which the whole country suffers from corruption and bad politics. Not only does political situation indicate the uneven development between nationally, but possibility of production can also cause the difference .Higher productivity of goods not only meet the demand for local use, but also is capable of supplying a high demand of international use, which increase export rates, with more export but less import increase the country profit and its people’s incomes. Hence, millions of dollars earned from export enable the country to develop on a large school.

For example, eighty percent of china’s income from its expected to the rest of the world benefits the country with its expected development such infrastructure with technology and medical advance. On the other hand , a country would meet wits end if it import good , more than it export .For instance ,Cambodia has imported 80% of both low and high products from Thailand and Vietnam ,whereas its export rate is seen less than 15% consequently the need for money used in development is not enough. Last but not least, human resources are a lot needed for the betterment of development .With plenty of human of human recourses fulfilled a variety of jobs such as engineers, medical experts and so on, the country will reach the peak of development.

Human resources are the vans of all aspects of development, as it can make the smaller, the better” known as the truth. For example, Singapore is just the smallest country in South-east Asia, but speed of its advance development names the country one of the dragon nations in Asia thanks to its loads of human resources, which ranks the county into top 5 of the world list issued by UNDP. All the above factors would be strong enough to convince another point of view stating that such uneven development among nations result from geographical areas that refers to smaller place with less natural resources and political tendency that follow communism and socialism. The truth is that Singapore is smaller in size but bigger in development, likewise even China has a tendency of that follow communism but its development is just as good as that of westerns.

Why are some countries more developed than others?. (2016, Mar 07). Retrieved from https://studymoose.com/why-are-some-countries-more-developed-than-others-essay 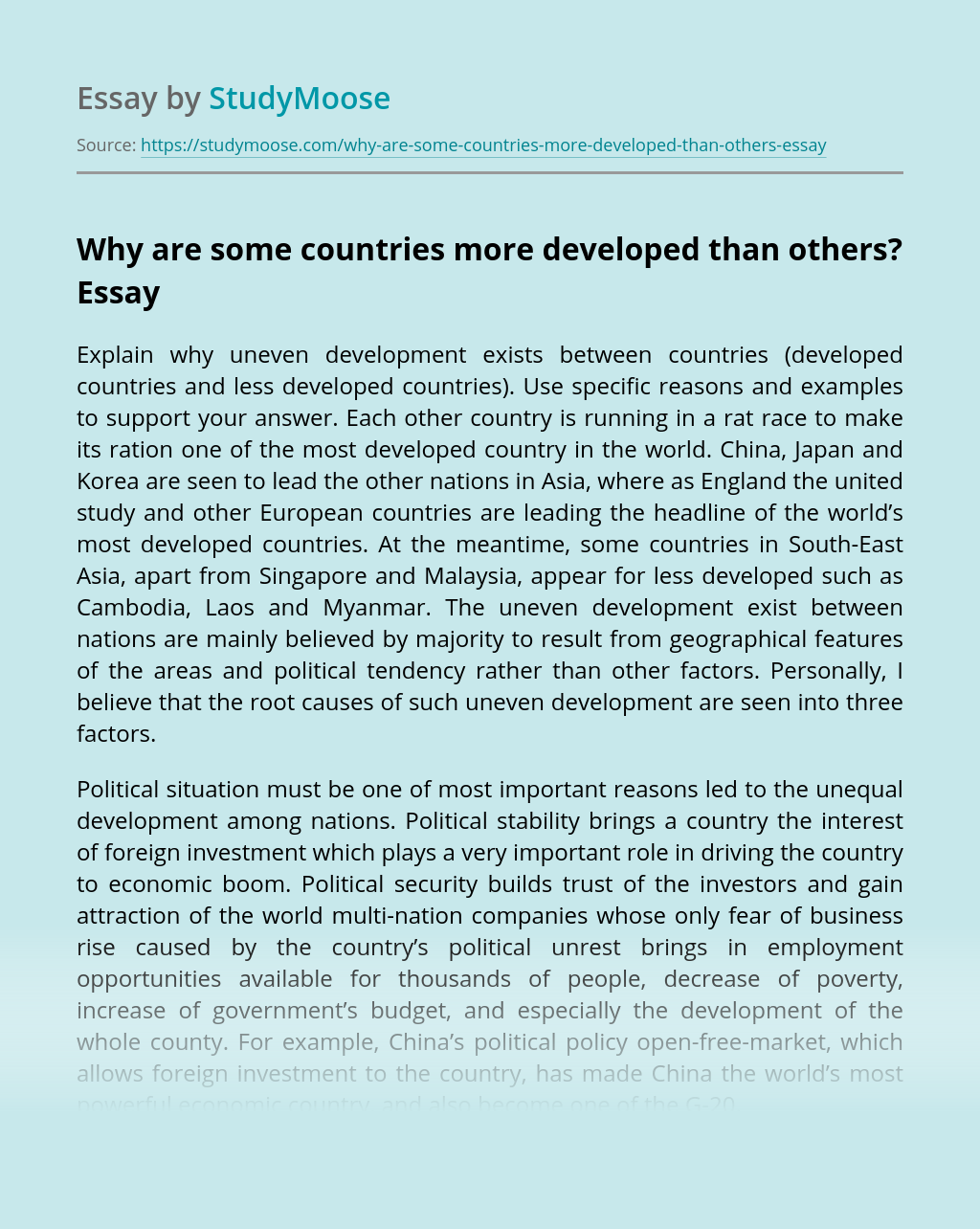