When I think of fake news, the first thought that pops into my head is Donald Trump and his infamous calling out of journalists who, in his view, spread lies. Although there is a funny side to fake news – watching President Trump getting worked up about so called false stories which feature himself – there is also a dark side when journalists alter the truth for political or commercial purposes and blatantly and unashamedly publish falsehoods. The term fake news is often used in dismissive and humorous situations, however, in reality there are serious and deep rooted consequences which accompany the sharing of fabricated stories.

Don't use plagiarized sources. Get your custom essay on
“ When I think of fake news the first thought that pops into ”
Get custom paper
NEW! smart matching with writer

People should be aware and be cautious about what they read in print media or online because, sadly, we have to question and cannot trust what is presented to us as fact. This is not a 21st Century phenomenon, it has been around since people began to document and record news, however, digital media has made fake news a daily reality which impacts millions of people across the globe.

The idea that journalists and platforms can publish lies and fake news is one of the disturbing realities of our time. The ways in which we receive news and information has been transformed over the past generation and when I look at my grandparents’ experience it really does belong to another century! Newspapers were the main source of news until radio broadcasting was invented and radios became a household item. Then in the late 1960s televisions became affordable and popular and news became glamorous.

All of these ways of accessing news required commitment and attention at certain times of the day but now news is available 24/7 and conveniently at everyone’s fingertips. With more choice came more sources of news and information. With more sources came a blurring of the boundaries between fact and fiction. The rapid pace of technological change means more fake news will be created. Despite the fact that fake news can sometimes be very obvious and full of click bait such as buzz words and attractive and contraversial images, as technology becomes more sophisticated it is harder to spot real news from fake news. Worryingly, many social media platforms have been accused of circulating fake news, especially Facebook and Twitter which are world leading social media outlets. These brands are hugely popular, they have power and status and their users believe and trust in them. That is one of the main reasons that fake news such as the recent Japenese Momo scare story or hoax as it turned out to be, spreads like wildfire and is sadly, why teenagers are so often the main victims. It is incredibly worrying that some teenagers don’t know how to tell real news and fake news apart. This can lead to manipulatation, prejudice, anxiety and fear. One of the ways in which you can tell if you are reading a reliable source of news is if it contains information which identifies the journalist or author. Many fake news sites have lots of advertising and sponsorship continually popping up. But commercial issues influence the content which is seen either side of the adverts and while this can seem harmless on the surface, it can add other more sinister dimensions when information about people’s personal profiles is used to target them with messages which in turn can have long reaching consequences. The Cambridge Analyitica worldwide scandal shocked and horrified millions of Facebook users when it was revealed that personal data was being used and shared for political campaigns. For political news, people have traditionally relied on the national newpapers, and TV and radio broadcasters, many of which are not completely impartial. A range and variety of perspectives and positions on the news of the day has been around for a very long time. This is not a recent occurrence as history students know, there are many versions of historical events, which were written from a particular political, social or geographical point of view. Newspapers are typically known for having a stance on political issues, and recently the papers have been central to the dissemination of information about the referendums on Scottish independence and Brexit. Some newspapers have been accused of carrying polls about Brexit which could lead readers to believe a majority of the population intended to vote in one way, when it was infact a large number of the readers of that particular newspaper who were intending to vote in that way. That kind of misleading reporting of polls and public opinion can persuade undecided voters and can change the course of history. A poll by the Guardian found 29% of over-65s thought that newspapers are important but only 16% of 18-24s were of the same opinion. This shows that newspapers are held in higher regard as a main source of news with an older age group which demonstrates the power and influence that the print media has with a certain section of the population. Many of the main newspapers now have digital editions which bring their messages and news to new readers in more convenient ways and this will hopefully help bring some of the traditional, trusted news brands to social media sites.One of the most important issues which the British people have had to decide on recently was Brexit. One of the main statements which was used in the Brexit referendum was that the NHS would receive Ј350m a week bonus; who would refuse that? However, it was a lie. That lie then influenced the way that many people voted in the referendum. Those responsible for creating the lie were not made accountable for creating and spreading these false statements. One story that I read was about the Manchester bombing, a tragic event and one which you could not imagine that anyone would be cruel enough to create fake news from. Chillingly, there was a list of missing people created following the bombing, which was later discovered to be fake. One of the people noted in this list as missing had been murdered some years previously. It is unimaginable and deeply disturbing that fictional stories can be created from tragic events, yet sadly, it seems to be a daily reality in our society. People gain fame and popularity through the pain and suffering of others and all for the rush and thrill of getting more followers and others do it for power and politics. Fake news is often presented in clever, believable and persuasive ways and plays to a suspicion or worry we have. It has become such a normal occurrence that we passively accept messages without thinking or challenging them. We absorb the message, we sometimes share it, and then we move on to the next thing. It is frightening. We can and probably do all fall victim to fake news stories because there is no truth filter. I am firmly of the view that that those responsible, the writers, journalists and authors, who create and share these stories should be held accountable and even be prosecuted. They cause personal distress, they influence people’s opinions and often create harm and chaos. Let’s stop being passive consumers of whatever comes our way. Let’s use the brilliance of technology to find those responsible and to create a truth filter to combat the age-old issue of fake news. The truth contains just as many plot twists as the best dramas and thrillers so let’s be bold and different and tell the truth in this new age.

When I think of fake news the first thought that pops into. (2019, Aug 20). Retrieved from https://studymoose.com/when-i-think-of-fake-news-the-first-thought-that-pops-into-essay 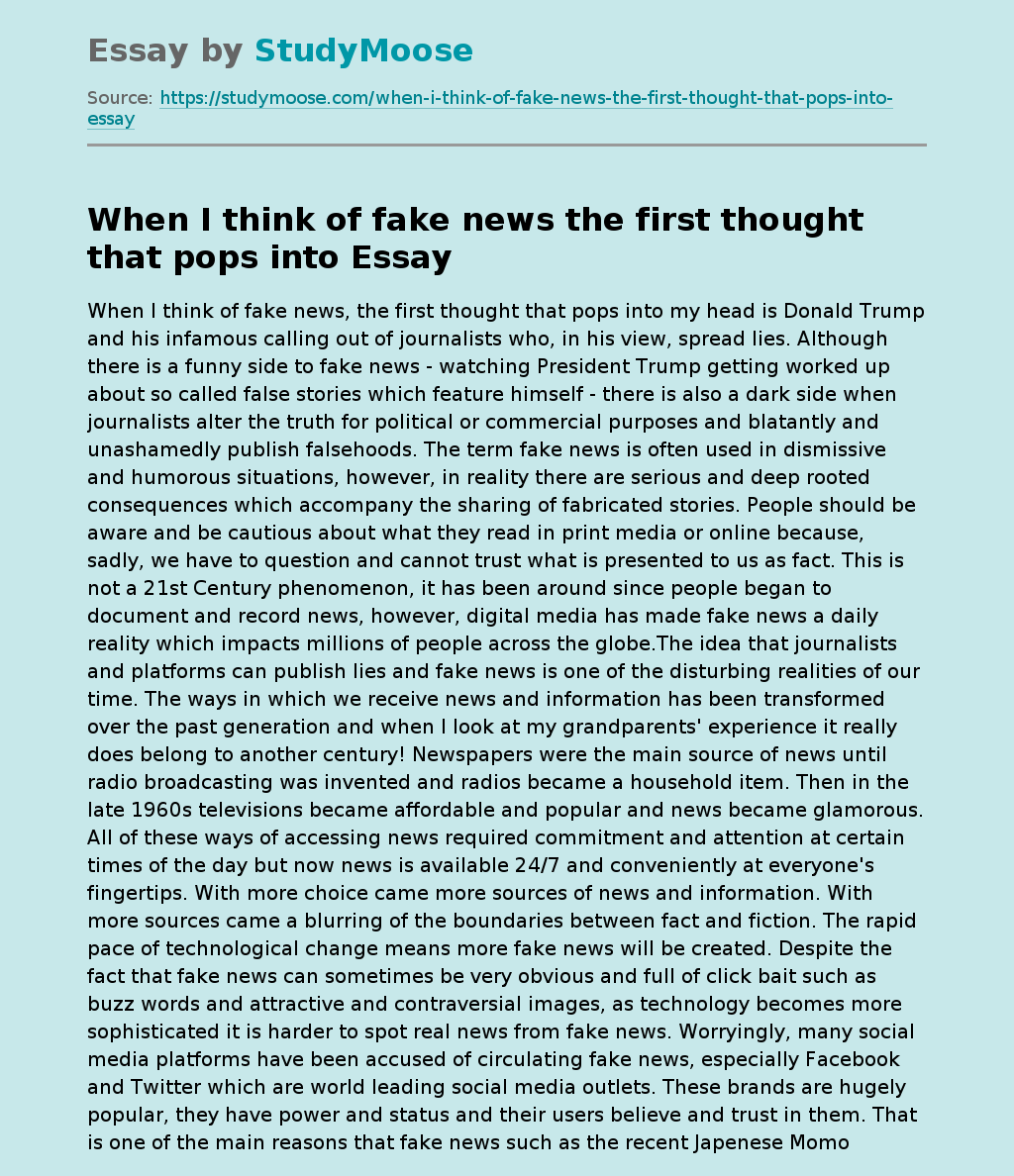