News Values and How Can They Help Us Understand News Production

News values are a set of general guidelines used by journalists to determine whether or not an article is newsworthy. News values can be seen less as a reflection of what type of information citizens want or need, and more as a reflection of organisational, sociological and cultural norms combined with economic factors (Weaver,2007). While there is no fixed set of news values that every publication must follow, overtime they have been whittled down to a series of approximately eight main rules.

Don't use plagiarized sources. Get your custom essay on
“ News Values and How Can They Help Us Understand News Production ”
Get custom paper
NEW! smart matching with writer

One of the most important news values journalists follow when choosing stories is proximity. Proximity refers to the geographic distance between an event and a media organization’s newsrooms and/or its audiences. (Devereux, 2007). However, the concept of proximity as a solid news value can prove difficult to explain. If news publications relied solely on proximity as a means of news worthiness, our papers would be filled with mundane, local stories with no attention paid to global news stories.

Obviously, this is not the case in newspaper production, which may lead to people questioning the validity of proximity as a news value. As stated in Devereaux’s’ writings, “the use of proximity can help predict whether an event will become news, but we agree with scholars who suggest that proximity is a multi-dimensional construct, and not tied to physical distance alone. (Adams,1986; Hicks and Gordon, 1974).”

It is evident many Irish local newspapers all follow a degree of proximity to some extent when choosing suitable news stories for their publication.

After analysing the Kerry Man newspaper published on the 5th of December 2018, I uncovered there was a fair mix of both local, national and global news stories dotted throughout the paper. In the global news section of the paper, I noticed many of the stories were covering Middle Eastern countries, America and Britain. This throws the rule of proximity out the window and we can assume these countries had the most relevant news stories over the course of the week.

Another news value I find to be very important is relevance. Relevance refers to how important the story will prove to be to the outer audience and how much interest it will spark in the story. This will vary depending on geographic location, customs and population of the particular area in question. Relevance can be a difficult branch to pin down. Prompted to explain how they understand this news criterion most reporters speak of importance: a relevant story is a story that is either moderately important to a lot of people or very important to a smaller group of people. It also goes without saying that a story that is very important to a large group of people is a very relevant story (Schultz, 2007).

As we have seen in the past year, the American presidential elections were a hot topic in Irish media. This is a perfect example of relevance as a news value. Irish publications are well aware of our countries ties with the aforementioned country run deep over several centuries, with many Irish people having close relatives overseas. This sparks an interest in Irish citizens in the general election, demanding the local newspapers to respond to this interest by following the elections closely.

Another key factor Journalists must consider when determining whether or not an article is newsworthy, is prominence. Prominence refers to how important the story will prove to be to the reader. Prominence generally refers to the level of importance surrounding the lead, where generally, the higher profile the lead is, the more public interest the story will generate. Prominence can largely alter which stories are chosen for the news. As outlined in Brighton’s book, he says “If there is a story about famine in Niger, how likely is it that another, entirely separate famine in, say Chad will be extensively reported on the same programme? It may be included as an add-on to the main report, but it is highly unlikely to merit a separate package; whereas, on another night, it would be given much more prominence.” (Brighton and Foy, 2007).

Prominence may also refer to how well-known the source in question is to the general public. It is for this reason that an article written about a local footballer who died in a car accident may make local headlines in the area but may not even merit a mention in the national newspaper. Due to the low-profile character who suffered the death in question, national newspapers must consider the prominence of his death and make their decision on whether or not this merits making the news. An example of prominence as a means of news selectivity cropped up in the past weeks, when Weeshie Fogarty, a legendary GAA commentator on Radio Kerry, passed away. Local newspapers and radio spared no effort in commending his contribution to local GAA. He headlined local newspapers all throughout the week. Weeshie received a small tribute on a daily national newspaper, highlighting the power of prominence. Weeshie may have been a major figure within Kerry, however, people in the rest of the country may not want to read pages about his life as it does not spark enough interest for them.

The final news value I will discuss is human interest. Human beings, as a whole, have a soft spot for these kinds of stories. News publications love publishing exclusive, heart-wrenching pieces which tell the personal tales of people and their achievements. These stories have the ability to summon emotion from even the dreariest of people. These tear-jerking tales are most definitely a hit with news publications, making this an extremely important news value for editors. As seen in Helen MacGill Hughes’ book, she outlines that stories such as these “called popular attention to the lives of ordinary contemporaries. These stories call attention to issues of constant interest; passion, betrayal, loyalty, ambition. (Hughes, 2017). It is stories such as these that offer a break from the mundane trials and tribulations of Government talks, Brexit deals and reports of violence and suffering, to name but a few.

Human interest is more of a sign to look out for in a story rather than a means based on which to evaluate whether a piece is newsworthy or not. Choosing an article for a newspaper based on human interest is merely subjective and coincides with the persons own beliefs/values. Christmas time, in particular, is a time when many human-interest pieces begin to crop up in local newspapers. These may be used to highlight an important issue to the public, for example; urging families to adopt a dog for Christmas rather than buy one from a puppy farmer. These informative pieces may highlight the impact adopting a dog from a shelter can have on its overall wellbeing and happiness, sparking emotion in the reader.

What can be benefitted through a clear understanding of news values is a better overview of general news production. Perhaps something big happens in your local area and it does not merit the national news, that does not mean it is unworthy or pointless. It is simply down to the fact that it did not conform to any news values when assessed. Take, for example, the same news story submitted to the very same news agency two days in a row. The story may have been on a robbery which occurred in a small countryside home. Two different workers assess the story each day independently. It is extremely possible the story may get published by one of the workers because she felt it was a strong human-interest piece. The worker who didn’t publish the story is not at fault, she simply felt it was not news worthy. This is a prime example of stories being open to interpretation and how not everyone considers the same stories newsworthy.

To conclude, there are no set of fixed constraints surrounding news values. While one may think an article qualifies as news, another may beg to differ. One of the most important things about news values is, as stated in Harcup’s journal, “who is applying news values can be as important as what news values are being applied.” (Harcup,2017). This highlights how news values are open to interpretation. They are merely a set of guidelines to be used, there is nothing set in stone. Some journalists are in a more powerful position than others and their decisions about what makes a story newsworthy will win out over other journalists’ decisions. In addition, the newsworthiness of some types of events or issues is open to discussion or interpretation. (Harcup,2017)

News Values and How Can They Help Us Understand News Production. (2020, Sep 05). Retrieved from http://studymoose.com/news-values-and-how-can-they-help-us-understand-news-production-essay 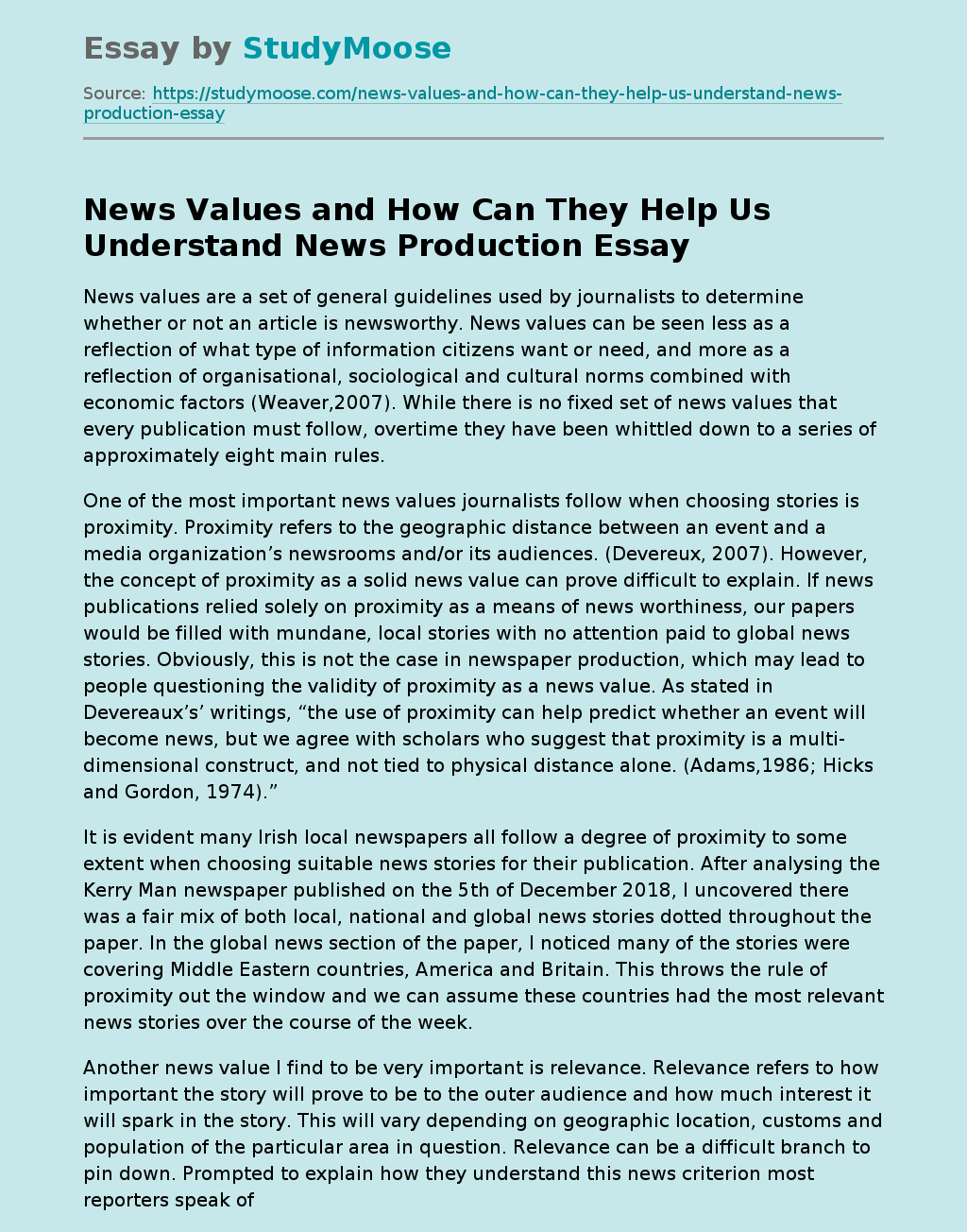