What Was The most Significant Cause of World War One?

World War 1 (WW1) otherwise known as the Great war was one of the deadliest wars in history it was a global war that started in Europe and took effect on the 28th of July 1914 and concluded on the 11th of November 1918 (4years 3months and 2 weeks). It led to the recruitment of over 70 million military personnel and in addition to that 60 million Europeans easily making it the second-largest war in human history. The war was also the deadliest in the history of Canada which took the lives of more than 60,000 soldiers.

Don't use plagiarized sources. Get your custom essay on
“ What Was The most Significant Cause of World War One? ”
Get custom paper
NEW! smart matching with writer

It removed the idea of romance associated with war as English Canadians taught and brought about killing and death on a large scale and cemented the fear of foreign military in the heart of Canadians and Canadian soldiers up until the coming of the second world war.

This is not the view that Canadians and Canadians soldiers had at the back of their minds when they had the thought of going to war, it was a completely different picture and experience for the soldiers.

This essay is to give and explain the reasons behind the eagerness of Canadians, specifically English Canadians who wanted to go to war for the mother country Britain. The reason why most Canadians responded so eagerly and enthusiastically to the call of war is because of three major reasons which are: Patriotism and Nationalism to the mother country Britain, an escape from unemployment and recession that was currently grappling the Canadian economy, and finally, Canadians wanted to explore the world and all it had to offer.

All this is what I would discuss in the essay below.

The first reason why Canadians were so supportive of the idea of going to war was because of patriotism and nationalism they had for Britain. Most Canadians especially immigrants from England in Ontario were very eager to join the war because of the immense loyalty they have towards Britain the mother country. It was not surprising seeing that the province of Ontario was mostly made of immigrants who came from Britain and had a strong connection to England. This made most of the English Canadians see that any war that Britain had gotten involved in was important and well deserved and Canadians believed in this notion that going to war represents a form of good morals. To put this into perspective the first response of Canadians and their involvement in the war was sole because it was an obligation they owed to the empire as seen when Laurier said “when Britain is at war, Canada is at war”.

An example of this same form of patriotism that was shown by Canadians to the affairs that concerned the mother country was by the English residents of Ontario and the English-speaking provinces of Canada and Newfoundland on how Canada sent troops to help Britain in the Boer war ( Canada’s first war) without much opposition by Canadians except those by French Canadians in Quebec where the French were not happy with the number of troops that were sent to South Africa which they saw as too much and who said their loyalty was with Canada and Quebec first before anyone else.

Unlike, the French Canadians English Canadians and Newfoundlanders (who were not part of Canada at that time) banded together and sent troops down to South Africa. But the English-speaking Canadians saw this as too little and then sent another round of troops. The term “loyalist myth” was used to bring all immigrants together especially in Ontario and Canada to create a national identity under the influence of Britain’s traditions and customs. Another example of Canada loyalty to the British empire can be seen when cities and towns across the country came together to create parades and concerts and people coming out in large numbers to take part in waving the union jack amidst the prairie’s economic situation both the provincial and municipal governments made expensive and large-scale provisions to show their commitment to the war effort as seen when Alberta was the first province to provide half a million bushels of oats. Manitoba and Saskatchewan followed the same route with their own donations of 50,000 flours bags and 1,500 horses each. The amount of willingness and participation that Canada showed during the period of events leading to the war rivaled that of Britain and of the major drivers of this was the literacy heritage of romance and neothalamic norms that were instilled into them at a young age which fuelled the misleading idea of how war should be viewed.

The second reason why Canadians were so eager to go to war was because of the severe unemployment and recession facing the Canadian economy and with this intense hardship Canadians were more than happy to leave the country for war even though it paid little to nothing approximately C$0.22cents a month. The prewar economic problem weakened the prairies and the most obvious form of this was the large-scale unemployed workers who filled up the western cities. The reason this high joblessness was very scary is that even though the weather changed to more favorable working conditions there was no significant reduction in the number of unemployed people. Unemployed workers were the first to rush towards the recruiting section in the year 1914-1915, enrolment was handled by pre-war militia regiments and also by civic organizations which cost the government nothing. After the expansion of the west, the prairie’s descended into an economic recession that was not avoidable. The hardest hit was the agricultural sector which saw expansion slow down drastically and reached its limit in several areas.

In the year 1912 stabilization of the production of crops happened at the same time as prices dropped the value of wheat and oats crops by 16 million dollars. These prices continued from 1913 all the way through to 1914 and by then the effects were already being felt. These economic problems also fueled the lack of growth and development of cities and towns across the prairies. The construction industry which has long been a major cause of the creation of new cities in the west had shut down most of its operations. Most Canadians had no idea especially those in the west did not have a clue of what role or obligations Canada had to play. However, in the minds of the people in the west would increase the global request and demand for agricultural goods. Westerners were very excited to take full advantage to be able to serve as the food supplier to her fellow allies, although no one predicted that Canada would have such an important role in the military struggle.
In the year 1914 Canada saw itself in the second round of immense economic problems. Canadians saw the war as a turn in their favor as Europe’s problems would become North America’s solution to tackle their economic problems. Because of an increasing demand of wheat which was needed in large quantities throughout the war.

From a countrywide perspective, the war was seen as a major factor for the increase in prices of agricultural goods which led to the growth of production and placed Canadian exports which included wheat, flour, coarse grains, cattle, and meat to an all-time high, same results were also felt in the forest and mineral sector. To sum up, everything the war made Canada an important and growing industrialized country.

What Was The most Significant Cause of World War One?. (2020, Oct 31). Retrieved from http://studymoose.com/what-was-the-most-significant-cause-of-world-war-one-essay 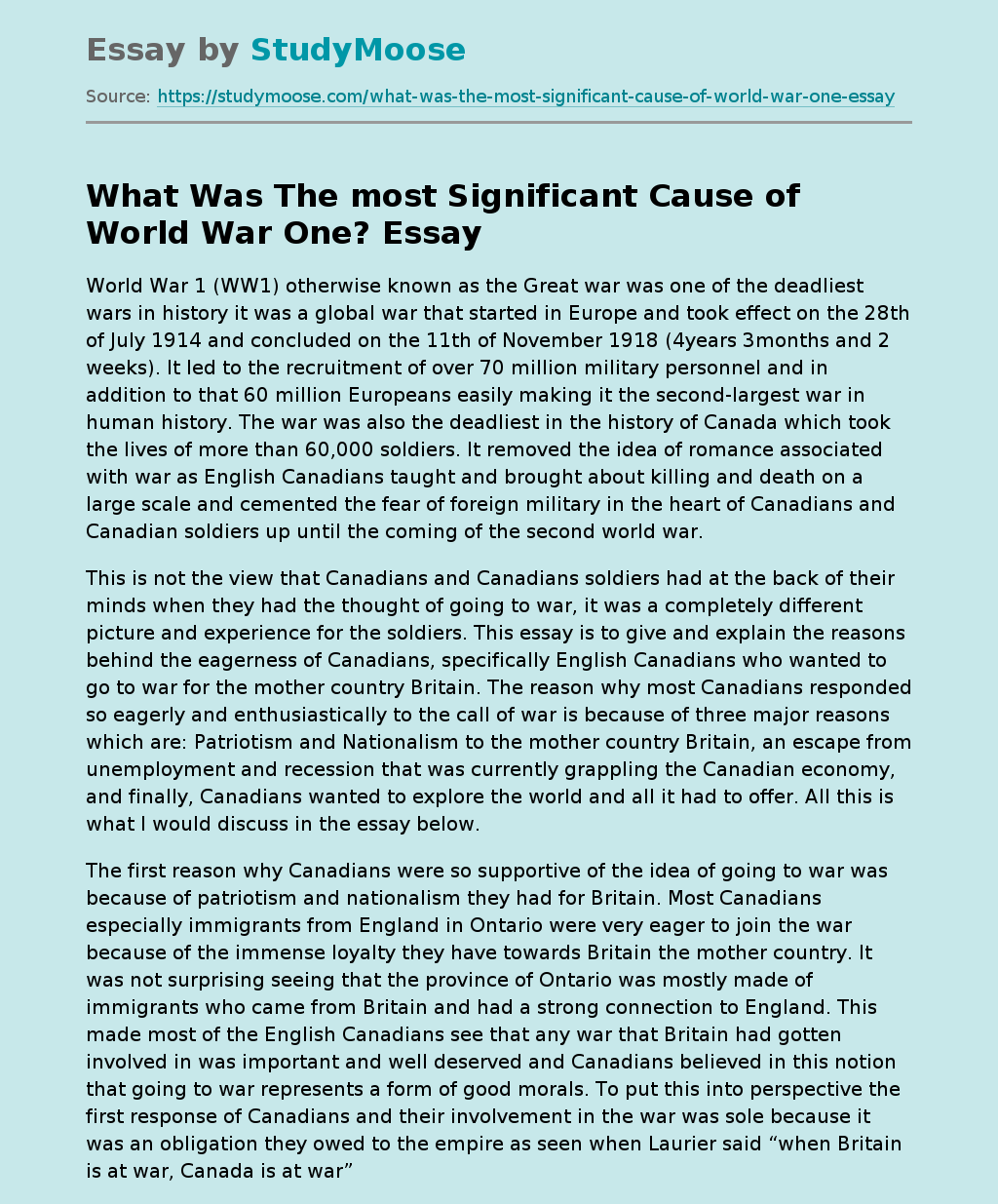