What was the underlying cause of World War I?

There were many causes of World War I, but the three most important causes were militarism, imperialism, and alliances. World War I started in 1914, and it started off when the Archduke Franz Ferdinand of Austria was assassinated by a Serbian nationalist. This was a global war centered in Europe which started July 28, 1914 and ended November 11, 1918. After World War I ended more than 9 million soldiers had been killed and about 21 million soldiers were wounded. The two nations that were effected most in the war were Germany and France.

Turn in your highest-quality paper
Get a qualified writer to help you with
“ What was the underlying cause of World War I? ”
Get high-quality paper
NEW! AI matching with writer

Also World War I marked the end of the four imperial dynasties which were Germany, Austria-Hungary, Russia, and Turkey.

One underlying cause of World War I was militarism. Militarism is when nations invested heavily in their armed forces in order to remain stronger than one’s enemies. Well first Great Britain spent the most money on its navy so it could have a very strong military.

Also Germany spent the most money on its army, to also have a very strong military. This evidence supports the claim that militarism was an underlying cause of the war because Germany had the strongest power on the continent. But the British navy was the strongest in the world. So obviously both countries, Germany and Great Britain, began to battle to see who had the strongest and most powerful military in the world.

A second underlying cause of World War I was imperialism. Imperialism is the extension of one nation’s control over other people. First Great Britain had 12,740,000 square miles which means that they had the biggest population in their colonies, in which there population was 400,000,000.

France had the second most square miles, in which they had 4,440,000 square miles and had the second biggest population, in which they had 56,000,000. This evidence supports the claim that imperialism was an underlying cause of the war because the more land and people they had the more easily the country could attack another nation. Then in turn, the big nation would gain control over more land and people and sooner or later that country will take control over every country surrounding them.

While militarism and imperialism were important, the most basis underlying cause of World War I was alliances. Alliances were nations that helped each other out and promised not to attack each other. One famous alliances were the Triple Entente, which consisted of France, Britain, and Russia. This famous alliance was probably one of the most powerful alliances there was in World War I. The three alliances did not have to worry about attacks on their nation because the three alliances were neighboring countries. So for instance if Austria-Hungary was getting attacked, both Germany and Italy could quickly help them because they are neighboring nations.

Alliances was the fundamental cause of the war because the more alliances you have the more you will not get attacked as much as other countries. But if you do not have any or little alliances you are likely to get attacked by other nations. Also other nations will help you with anything like for example if you need more weapons or soldiers. But again if you do not have any or little alliances you will not get help during an attack and a huge and powerful alliance like the Triple Entente could attack you at any point and they could gain control over you land. Also while getting attacked you cannot call an alliance to help you with help like getting more weapons and bringing in more soldiers.

Although there were other causes that contributed to World War I like nationalism which was behind the assassination of Archduke Franz Ferdinand, the three important underlying causes were- militarism, imperialism, and alliances. In conclusion, the main underlying cause of World War I was alliances in my opinion because the more alliances you had, the more you could attack a nation and gain control over their land, which in turn would cause a line of battles.

What was the underlying cause of World War I?. (2016, Aug 31). Retrieved from https://studymoose.com/what-was-the-underlying-cause-of-world-war-i-essay 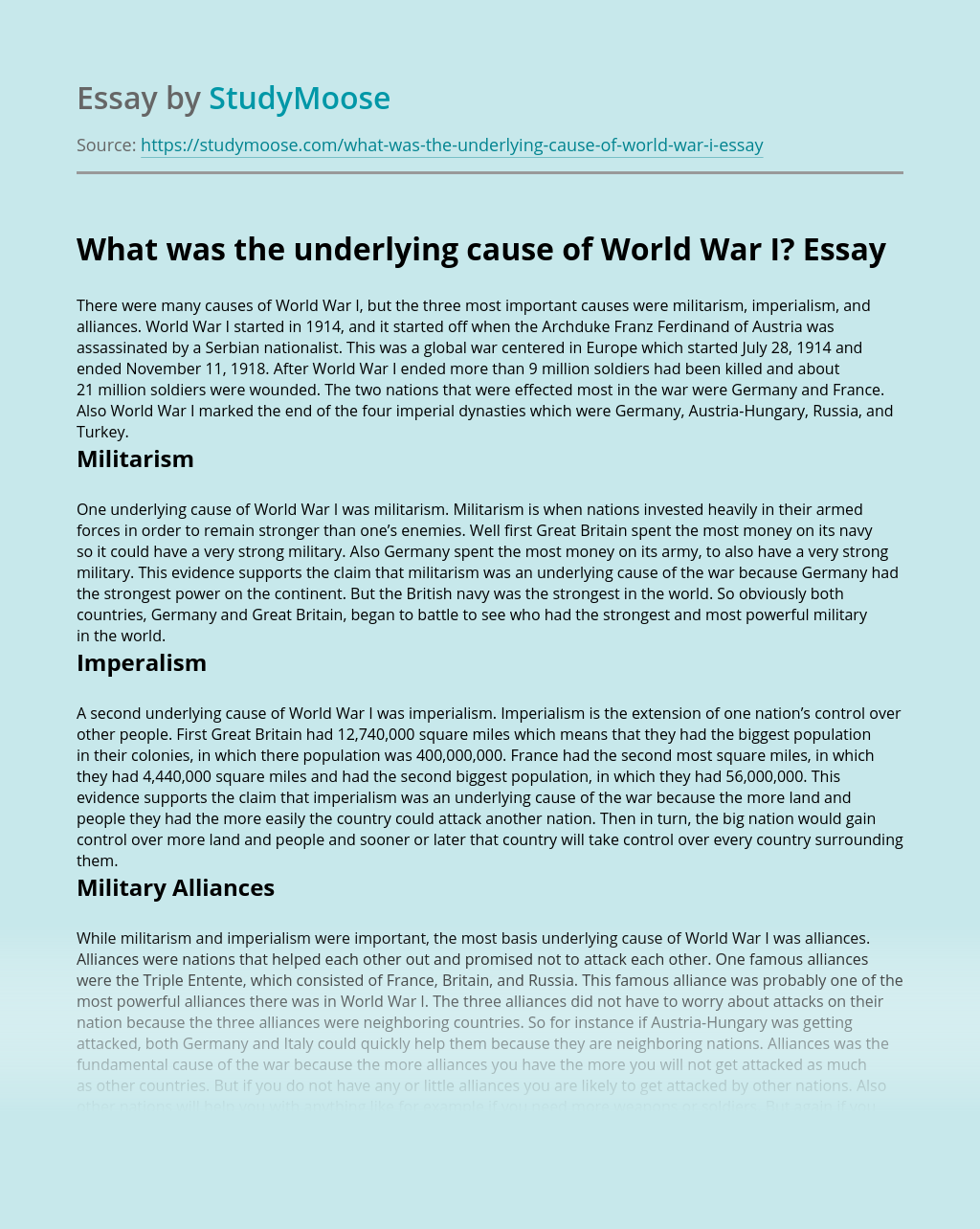 Turn in your highest-quality paper
Get a qualified writer to help you with
“ What was the underlying cause of World War I? ”
Get high-quality paper
Helping students since 2015
Stay Safe, Stay Original