In the book Epic of America, James Truslow (1933) described the American dream as “…dream of a land in which life should be better and richer and fuller for everyone, with opportunity for each according to ability or achievement… It is not a dream of motor cars and high wages, but a dream of social order in which each man and woman shall be able to attain to the fullest stature of which they are innately capable and be recognized by others for what they are, regardless of the fortuitous circumstances of birth or position.

Don't use plagiarized sources. Get your custom essay on
“ What was the American Dream in the 1940’s? ”
Get custom paper
NEW! smart matching with writer

” This same meaning of being able to develop and reach one’s full potential regardless of sex or social class holds true for all time periods, even in the war-torn 1940’s. Tennesse William’s “The Glass Menagerie” imparts the message that the fulfillment of the American dream is very difficult, if not outright impossible, because of the many hurdles that real life offers. William emphasizes this by ensuring that none of his major characters ever came close to fulfilling the dream.

Only the minor character of Jim, the gentleman caller, ever came close to the realization of the dream.

He represented the typical teenage icon of multifaceted talents – a consummate actor and male lead in the annual light operas, a basketball star, debate captain, and senior class president – during his high school years. Despite his great potentials, life seems to throw a lot of obstacles his way for he eventually ended up as a lowly shipping clerk in the Continental Shoemaker’s Factory together with Tom.

But he never lost hope and continued to improve himself by continuing his education in his pursuit of his foreseeable future in the television industry. In contrast, the Wingfield family seems to be entrenched in the sea of despair.

The matriarch Amanda is a strong mother who has survived the abandonment of her husband by frequently reliving the glory of her Southern past. Her domineering character and belief in the American dream causes her to push her children to study, improve themselves and live successful lives. However, her children, Laura and Tom, are both dreamers whose aspirations are markedly different from their mother. Both of them dream of escape. For Laura, she wants to escape the reality of her physical imperfections whereas Tom hopes to escape the responsibility of his mother and sister.

2. Discuss Williams’ choice to tell this story from the memory of one character, rather than have the action take place “live” on stage. How does this affect the staging of the play, and what does it tell us about Tom’s attempt to escape. Because William chose to make a memory play wherein the story is told through the perspective of only one character, he was able to offer a separate and more detailed explanation of the events as they happen, something that cannot be done if the action was to take place “live” on stage.

However, since Tom is both the narrator and a character in the story, he cannot remain as an unbiased observer. In fact, he jumps from the role of a narrator to his required character often where he has to express different emotions as the play develops. This confuses the audience as they wonder whether his narration is factual or is in fact merely colored by his emotions and judgment. As a narrator, Tom was able to sufficiently express the negative result of his attempt to escape his job and family.

It was as a narrator that he told the events following the failed attempt to find his sister a husband. He tells how he was fired from the shoe warehouse shortly thereafter and how he finally fulfilled his dream of escaping his family to wander the world only to become literally haunted by thoughts of his sister, which he can never seem to escape no matter where he went. Hence his attempt to escape remain a futile endeavor. 3. Describe the contrast between Amanda’s perception of the night Jim comes to visit, and Laura’s perception of the same evening.

What does this tell us about the relationship between Amanda and her children, and about Laura’s future. Amanda was highly hopeful that by making the situation ideal, the gentleman caller Jim O’Connor will immediately fall in love with her daughter Laura on sight and marry her. Hence she prepared everything personally. Laura, on the other hand, had little hope that her mother’s vision would come true. In fact, Laura was apprehensive in meeting her teenage crush whom she believes will have very little interest in someone like her.

Hence, she tried avoiding opening the door when he arrived and was hesitant in sitting with him in the same table, acts that her mother viewed as her daughter’s self-destructive attempt to ruin her chances with the gentleman caller. Both mother and daughter’s hope soared when Jim kissed Laura only to be plunged into the depths of despair when they learned that Jim is already engaged with a woman he loves and won’t be seeing Laura again. In the end, the two women shared the same feelings of disappointment and lose of hope for the future.

Though Amanda is afraid of how Laura will survive when she dies especially with her daughter’s introverted and shy personality and incompetence in finding and keeping a good job, she still tried to lighten the situation by insisting that the fault lies on Tom’s incompetence in not making sure that the gentleman he brings home is still unattached. Though Laura’s future seems bleak, she appears to have accepted what she believes as the ‘inevitable’ and tried to escape reality by playing the Victrola. This shows that Amanda and Laura’s personalities are complete opposite.

Amanda has a very strong personality whereas Laura has a very low self esteem. This gives Amanda the role of the undisputed leader and Laura the meek follower. However, Amanda is also a very concerned mother who keeps her daughter’s best interest in mind. This became obvious when she personally arranged to make everything perfect for Jim and Laura’s first meeting without complaint and giving numerous encouragements to Laura. However, her domineering character and careless words only make Laura feel more incompetent and a big disappointment for her mother. 4.

Discuss the title of the play. It has both a literal and symbolic meaning. What are they? The title Glass Menagerie refers to the various animal glass figurines that Laura collects. They represent Laura’s only means of escape. Her self-esteem was deeply undermined because of the fact that she has to wear an inconspicuous metal brace to balance her shorter leg, hence she became very shy to the point that she often withdraws from society. The perfection of her glass menagerie collection comforts her and makes her forget her own physical flaws and how she disappointed her mother.

They also represent the Wingfield family’s fragile dreams. The figurines are beautiful to look at just like any dream is ideal to envisage. The family members have many nice and beautiful dreams. For Amanda, she dreams of her life as a Southern belle in Blue Mountains who remain carefree and whose only concern is to entertain suitors and choose among them the best husband material. Tom dreams of escaping his boring job and the emotional and financial burden of his mother and sister by joining the Merchant Marines. And finally, Laura dreams of a perfect world wherein flaws are non-existent.

However, since the figurines are made up of glass, they can easily be shattered. Amanda’s dream turned into a nightmare as her husband abandoned her with a crippled daughter and an escapist son. Tom’s dream of escape was shattered with his constant thoughts of regret for leaving behind a highly dependent sister. And Laura’s dream of a world free of imperfections is the most fragile of all since it can never exist in the real world and its illusion can easily shatter when the reality of hunger and poverty manifest itself. 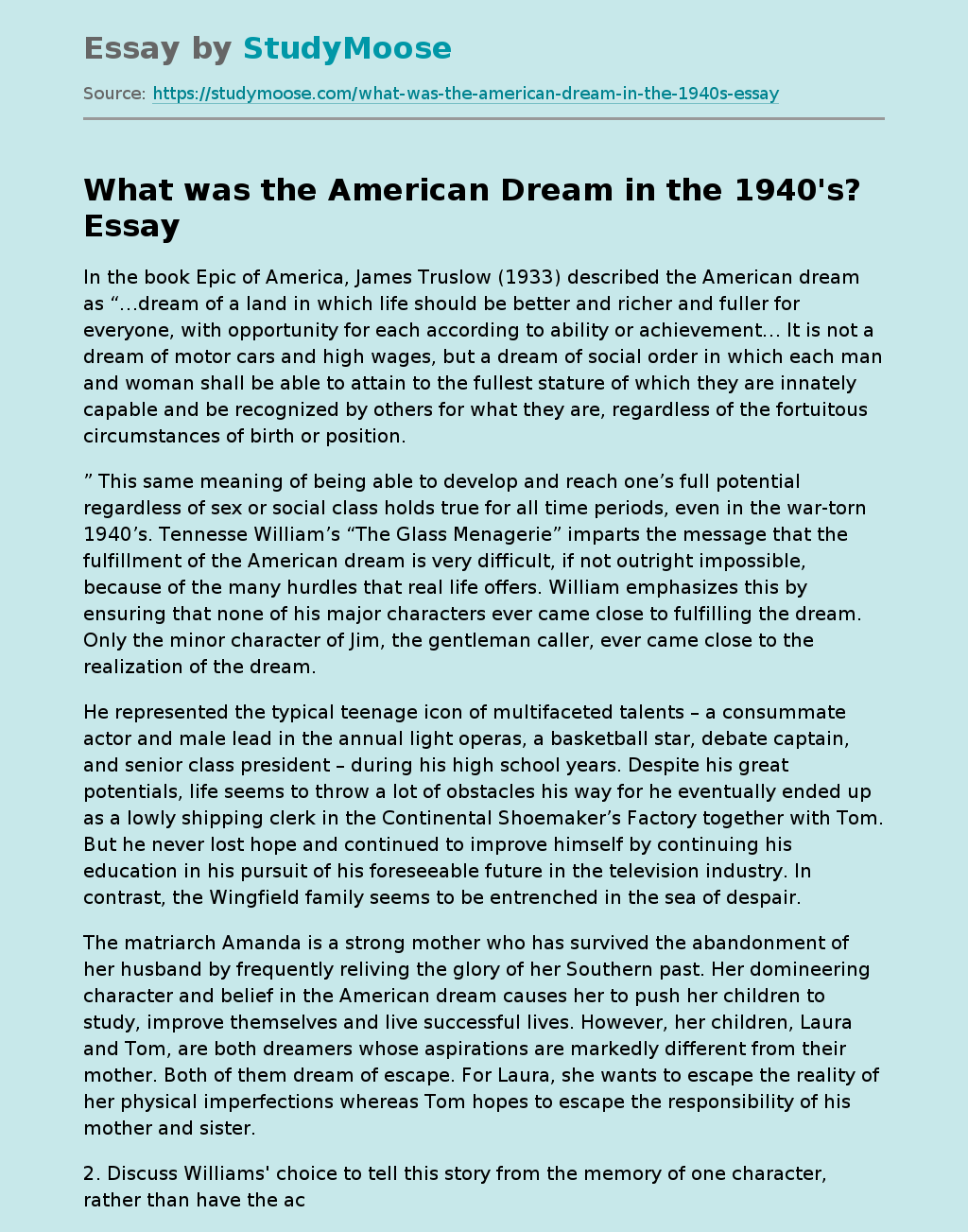