What makes someone mad? The internet says insanity may manifest

What makes someone mad? The internet says insanity may manifest as violations of societal norms, including a person becoming a danger to themselves or other.

In Shakespeare’s Macbeth, the progressive descent into madness and Macbeth’s inability to control the manifestation of his desires are expressed through his gradual detachment from his morals. The motifs of insomnia and hallucinations represent Macbeth’s inability to wrangle his ambition, a profound effect of the inner turmoil of his mind. Freed from all moral conscience, the corruptive power of his ambition causes his spiral into insanity, while increased rates of insomnia subsequently result in his detachment from rationality.

Don't use plagiarized sources. Get your custom essay on
“ What makes someone mad? The internet says insanity may manifest ”
Get custom paper
NEW! smart matching with writer

Hence, the deconstruction of Macbeth’s sanity shown through his loss of understanding of the difference between good and evil emphasises Shakespeare’s critique of the consequences that come with man’s corrupt desires and its inherently self-destructive nature that ultimately led to Macbeth’s downfall.

Madness is a mental illness of such a severe nature that a person cannot distinguish fantasy from reality and doing the same thing over again expecting different results.

The cyclical nature of madness is introduced in the opening line: “when shall we three meet again.” By beginning the play in medias rea, there is a sense of continuous time or inescapability of cycles – the repetition of the same thing. The language is indeterminate as it alienates the viewer from the witches, a sense that their lives are not defined by the normal strains of society but instead by the wild and uncontainable forces of nature.

The use of catalectic trochaic tetrameter, which is an unbalanced sentence structure is seen in “when the battle is lost and won”. The odd number of syllables which are unbalanced reflects a confusing and conflicting message behind the text – the line blurs the barrier between ‘lost and won’, emphasising how the witches do not differ between losing and winning, and therefore what would be associated with ‘good’ or ‘evil’. Opting to use ‘lost and won’ instead of ‘lost or won’ in the context of Macbeth shows how he won the physical battle and became king, but subsequently lost his soul and emotional connection from reality, therefore becoming mad.

Shakespeare uses sleeplessness and hallucinations to emphasise Macbeth’s insanity as he becomes blind to the full repercussions of his actions, reinforcing the notion of a loss of morals. Macbeth is aware that sleep, which “knits up the ravell’d sleeve of care,” is what he is in need of, and that the corrupted ambition that plagues his thoughts make him unable to have a clear conscience. His claim “Methought I heard a voice cry ‘Sleep no more! Macbeth does murder sleep’, the innocent sleep,” connects troubled sleep and hallucinations to a troubled mind, emphasising the consequences that come as he further destroys his humanity.

Macbeth’s ambition surpasses all his moral oppositions and he is unable to satisfy his yearning for power. Despite having already achieved his crown, his focus is on eliminating any possible threat. ” I have no spur to prick the sides of my intent, but only vaulting ambition, which overleaps itself and falls on the other” exemplifies Macbeth’s understanding of the poisonous nature of his ambition, but the personification showcases his overwhelming desire for power that exceeds his moral objections.

Though Macbeth knows that his thoughts are evil, he has become so subjugated by his ambition that he has allowed malice to overrule reason and virtue. Macbeth essentially is perpetuating his own demise – fighting something that he himself is creating as he refuses to acknowledge his self-division in saying “to know the deed ’tis best not know myself”. His desperate denial of wrongdoing is emphasised when he states “Stars hide your fires; Let not light see my black and deep desires”. The metaphors of light and dark as good and evil further expose his internal conflict as his lust for power reveals itself to have fully overtaken his morals.

All morals and rationality were not able to compete with the overwhelming nature of his desires for power. Insanity reveals the development of corrupt ambition and internal conflict this causes, which ultimately manifested themselves into his downfall.

What makes someone mad? The internet says insanity may manifest. (2019, Nov 29). Retrieved from https://studymoose.com/what-makes-someone-mad-the-internet-says-insanity-may-manifest-example-essay 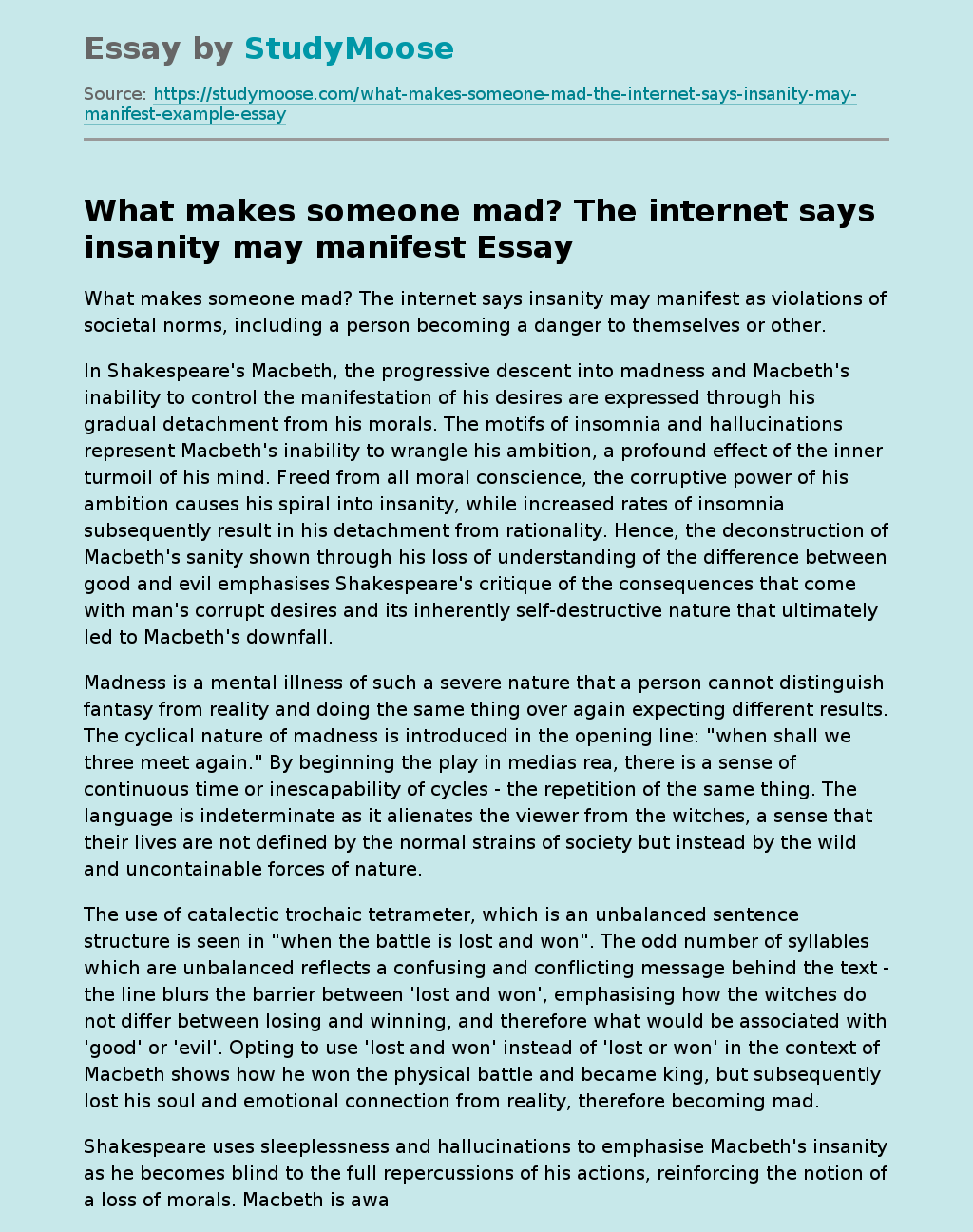