What Is the Good Life?

The “good life” is a phrase that is used to describe the ideal life for one to live. According to Aristotle, the good life should be free of any greed, full of virtue, pleasure, and friendships, as well as excellence in whatever you may do. I would agree with all of the things he believed in. Many people in America would argue that the good life would consist of being rather wealthy without working, having many friends, a stable family with an attractive spouse and so on.

Don't use plagiarized sources.
Get Your Custom Essay on What Is the Good Life? Just from $13,9/Page

I feel this visualization that America has of the good life is completely wrong. The good life should be more virtue based rather than being all about material objects and what you have for yourself.

What you contribute to others’ lives should be focused on just as much as your own life when considering whether someone has the good life.

In parts of Africa, their people could not even imagine having what the people of America consider to be the good life. Their idea of the good life would be much different and probably much more virtuous than America because they do not have material objects and their culture is much more different than America’s. This makes defining the good life universally quite difficult, because the good life can be interpreted so many ways. However, a universal definition of the phrase good life is possible; I believe if you make the primary goal relatively general this task can be done.

One approach that could be used to define the good life is emphasizing simplicity. In the book “Walden”, philosopher Henry David Thoreau emphasizes simplicity when trying to define the good life. His findings during his isolation in the book “Walden” were quite interesting. He found that by lowering his standards, he had no room for letdown, he was always content. He also claimed that his new lower standards help facilitated pleasures rather than hindering them, but some intelligence was required to appreciate the small things in life. Another key element he wrote about in “Walden” was that material objects cannot provide him with inner peace and contentment he sought after when retreating to isolation. This means that material objects really cannot be a factor when defining the good life from a simplicity approach. Thoreau’s idea behind making life simple was finding solitude and seeing if indeed depriving himself would make his perception of things much more positive than before.

Another approach that could help define the good life universally is happiness. Four years ago, the Dalai Lama once said (while teaching people about the art of happiness) “we pay too much concern to material things and neglect our inner resources.” This statement essentially means that we need to lay off on the material objects that make us artificially or temporarily happy and start finding what is most important to us, which should be happiness. Theoretically, if you are not happy and can never seem to find happiness, what is the point of living? That previous thought is what leads many to suicide, so in order to live well you need to find happiness. I digress; later in his self-help teaching session the Dalai Lama claimed that everyone had the necessities needed to achieve happiness and a good life, which makes this a very good and completely plausible universal approach to determine whether one has had the good life. In “Honest Work”, Aristotle mentions how we should be self-sufficient and find happiness wherever we find pleasure, just as long as we do not seek pleasure in the wrong and non-virtuous places.

He states that if we find happiness and we are virtuous, no one can tell us we do not have the good life because we are the best judges of ourselves. He basically states that nothing can override our perception of ourselves because we know ourselves the best. Aristotle believed that excess or defect of pleasure, wealth, honor, and virtue can create unhappiness, and in order to stay happy we must stay balanced on these core areas. Unlike the Dalai Lama, Aristotle thought that we must have an unchangeable character and some knowledge to act accordingly in these four core areas. Without it we would be non-genuine and unhappy which would defeat the original purpose. The happiness approach differentiates itself from simplicity because it is definable (you are either happy or you are not), which simplicity is not.

However, happiness is similar to simplicity in the way that they are both based solely on your own perception and no one else’s. The third and final approach that can help universally define the good life is virtue ethics. Virtue ethics describe the character of a moral agent as a driving force for ethical behavior, rather than deontology, consequentialism, or pragmatic ethics. Aristotle created a virtues theory that consisted of acting upon morality and intellectuality.

He claimed that an act was virtuous if one acted intellectually and morally, and that one used wisdom, rationality, comprehension, and obedience to morality when acting upon a situation. If one acts virtuously it means that they fully understood the situation and acted in the “right” way, or at least attempted to act in a moral way. If one acts genuinely virtuously they should have little to no problems in life because they do not create a very difficult environment for problems to arise in. A problem free environment benefits many aspects in life because it creates low stress and reduces the amount of situations that slow one’s productivity.

This approach is somewhat similar to the other two approaches I mentioned earlier, in the way they all are quite complex, require critical thinking to comprehend, and use one’s perception to determine if something will lead one to the good life. The first approach is somewhat similar to the first because it describes how to act to achieve the good life. It is also similar to the second approach of happiness because Aristotle was an avid believer in both. The third approach contrasts from the other two approaches because it has many different branches of themes rather than one main theme that one should stick to. The three approaches I have found to help define a universal definition of the good life are from quite a wide variety of areas which makes them a good pairing, so they are equally balanced and not heavily reliant on one or even two aspects of life. 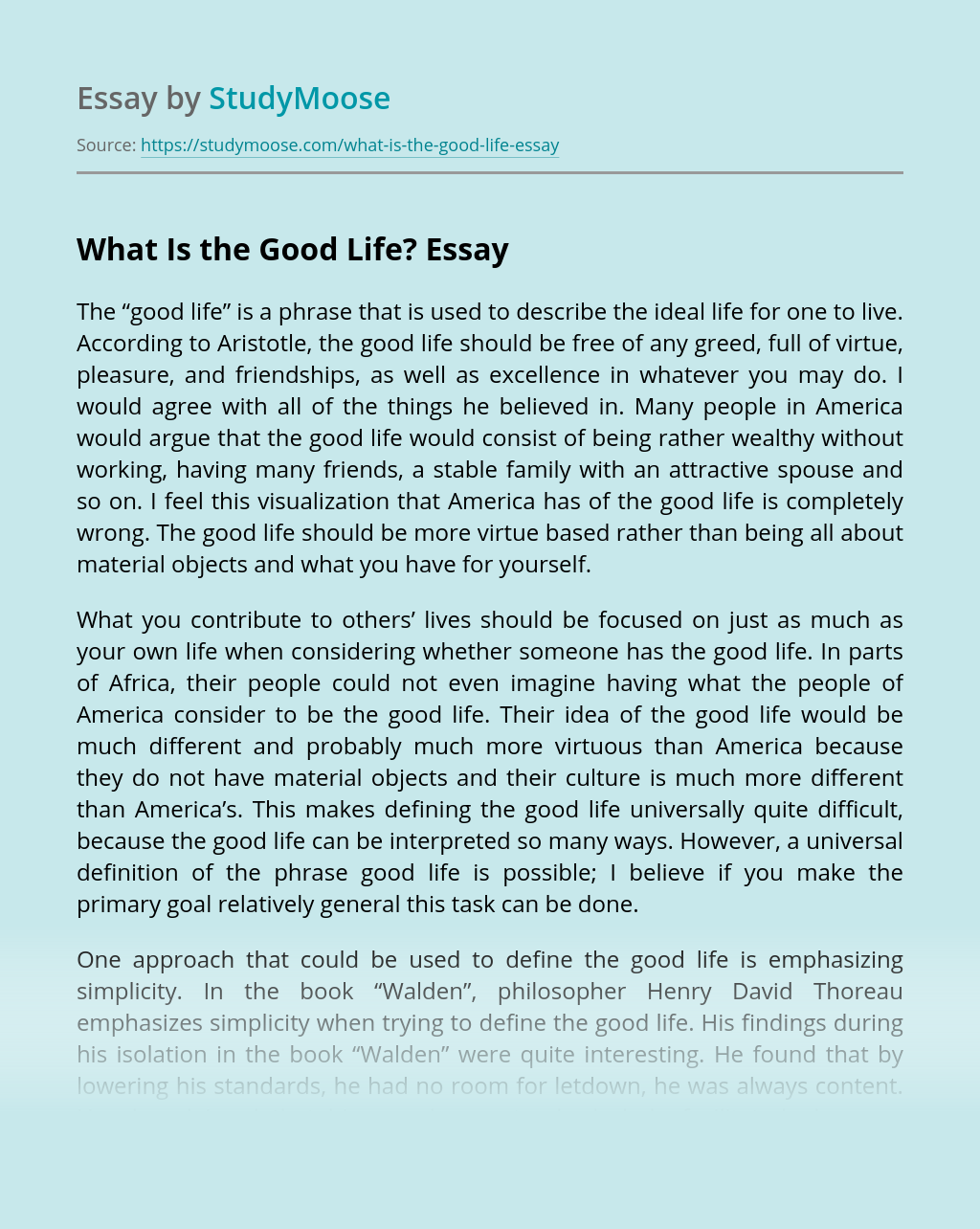 Unexamined Life Is Not Worth Living

Goal of the Course: The general goal of this course is to consider what philosophers call the Socratic commitment. Socrates, a Greek philosopher, 470-399 B. C. , was placed on trial in Athens because he questioned the political, moral, and religious practices of Athens. He gave his own defense which his pupil Plato recorded as...

View sample
Get Essay
The Move that Changed My Life

Moving to America made me realize how much freedom is limited in my country. Coming to the United States showed me how to appreciate my native background, culture and morals but it also showed me how well freedom is given here. I was born in Nigeria. I’ve lived in Nigeria for fourteen years, the summer...

Life is like one big race that we are set out to win, with many hurdles in our way that try to stop us and test our determination, but with every failure and defeat our determination grows stronger as we ourselves grow as a person. You will learn that life is full of ups and...

The passage from Testaments Betrayed by Czech writer Milan Kundera discusses the basic idea of the preservation of privacy and the criminality of the failure to do so. The passage considers the situation that occurred between two important Russian figures around the early 1970’s. Through complete examination of the circumstance and Kundera’s stance, the sheer...