What is Normal Now And Years Ago?

Growing up, we have always been told to stand out and be different, but what is different? What is acceptable? How far can we express ourselves before it is classed as “inappropriate” or “too far”? I am thirteen years old and have panic attacks daily, and for me this is not out of the ordinary, it is just something that I have learned to deal with. However, others think this is not normal because it doesn’t happen to them, in fact, most people don”t deal with this at all.

Don't use plagiarized sources. Get your custom essay on
“ What is Normal Now And Years Ago? ”
Get custom paper
NEW! smart matching with writer

So, the question stands, is it normal?

I decided on this topic because the word “normal” is consistently used to describe behavior, personality and appearance. It made me wonder how people’s perception of this word differs from mine, and why it does so. After some thought, I became more and more fascinated by this topic, then the opportunity to research more thoroughly and write about it arose, and I couldn’t help but choose this as my thesis question.

Let’s consider Freddie Mercury as an example. He was foreign (from Zanzibar, which people often mistook for Pakistan), homosexual, poor, “oddly” named (Farrokh Bulsara), and he dressed in feminine clothes. All these things made him not fit into what the average person of the time thought of as customary, and he was often bullied for these things when he first came to live in England. Moreover, Freddie was born with 4 additional incisors in his upper jaw which made the front teeth protrude and gave him a large and obvious overbite.

He was often embarrassed and ashamed of this and would try to cover his teeth with his lips when speaking and put his hand over his mouth when laughing; he then, however, found a way to use this to his advantage. It allowed him to reach a vast range of vocal cords which led to his later success and fame. This displays to us that we should not try to hide our imperfections which we believe make us peculiar, as they could help us or even lead to good things in the future.

Aside from Freddie Mercury, many celebrities have some sort of disability, whether it is physical, psychological or elsewise: Steven Hawking had Motor-Neuron Disease (ASL), Mariah Carey was diagnosed with Bipolar Disorder and John Nash had schizophrenia.

This shows how much those with disabilities, even if they may be faced with prejudice and discrimination, can fit in with society- and even become widely known and successful.

A pie chart showing the response to the question “Do you consider yourself to be normal? Yes/No.

70% of those I asked said they would not consider themselves normal. That is the majority of people, yet something strived for in our society is normality. Out of these people, almost all of them also said it did not affect them, with most reasons being alike to “nobody being normal” or not caring what others think of them. An example of an answer is as such: “Nobody is normal, and it is good to have different interests and feelings than others.” This was one of the most common responses given. It, again, is indicating that no one is normal and that such an idea does not exist. However, in society people still have standards as to what is considered normal and what is considered abnormal.

Though, when a group of teenagers is asked if they consider themselves to be normal, a large number did not. This shows how my generation has different social hierarchies than others. Now, not being “normal” is not something that affects people; over 60% said it did not affect their lives. This can suggest that in today’s standards for teenagers, it does not matter whether they have some sort of disability, or whether they are a part of the LGBT+ community or any other trait that may have been classed as “abnormal” or “wrong” in the past. Yet there was still the group who said that it did affect them. Over half of these reasons being due to bullying. From this we can understand that people are still being mistreated for not fitting into the people around them and their ideals. Although this is not as common as it used to be, it is still an issue that we can only hope will be resolved in the future.

But why do people discriminate against those who they do not perceive as “normal” in their ideals? Is it because as humans, we often don”t like what we don”t understand? Or is it because we all have prejudice but some of us were never taught to not act on this? Well, perhaps it depends on the person, and their upbringing or culture. Or perhaps they “just can”t help themselves”. Another idea is that being different or standing out may make us a target or enemy to those around us, it often feels safe to be similar to those around us. This could make people feel a need to target those who are different to them, it perhaps makes them uncomfortable.

As I mentioned previously, people’s thoughts on this word change often;, especially over large time periods. One thousand years ago, in 1019, most people were farmers whereas in current times, jobs range from civil engineers to teachers to data scientists and everything in between. Also, in that time era, medicine was primitive; doctors would often “bleed” people with leeches to draw out bad blood from the patients and this was all considered to be normal. In this generation, doctors can treat many diseases, such as AIDS, some cancers and a vast number of others. They can also prescribe their patients with pills that calm anxiety, balance mood and help people with psychosis or schizophrenia. Humans now would think it very odd to use leeches as a method that doctors would use.

One hundred years ago -1919- World War One had just ended, and the Treaty of Versailles had just been signed. Over 16 million people had died, so many countries were trying to recover from the impacts it had on them. When we think about The Great War now, we often think it is a horrific experience and many people do not believe in the possibility of another war similar, because we have developed so that if another war on that large scale, it would be detrimental to our entire world. Back in that time, the idea of a war that appalling was so normal to them as they were living it, yet now it is something many people my age would struggle to grasp; it seems too bizarre of a concept to grasp.

To finish, ten years ago, the world was still vastly different. Even then, our world was greatly less advanced than it is now. In 2009, the first touchscreen mobile devices were coming out. These devices were mainly Nokia’s, Blackberry’s, buttoned phones and flip phones. In the present day, we are using 4K screens that have OLED backlighting and can use facial recognition. The most recent development is the use of 5G data connection that can accommodate to the user by accelerating the upload and download times. As well as that, in the next few years, 5G data should be accessible everywhere in the UK, whereas 4G (the current most used connection) is not as reachable in secluded areas such as small villages and the countryside. Following this, medicine and healthcare has enhanced. Heart disease deaths have dropped by 40% in the past decade: this is due to pacemakers, artificial surgically installed replacements for heart ventricles and improved knowledge of the key causes and symptoms, and how to avoid them.

What is Normal Now And Years Ago?. (2019, Nov 18). Retrieved from https://studymoose.com/what-is-normal-now-and-years-ago-essay 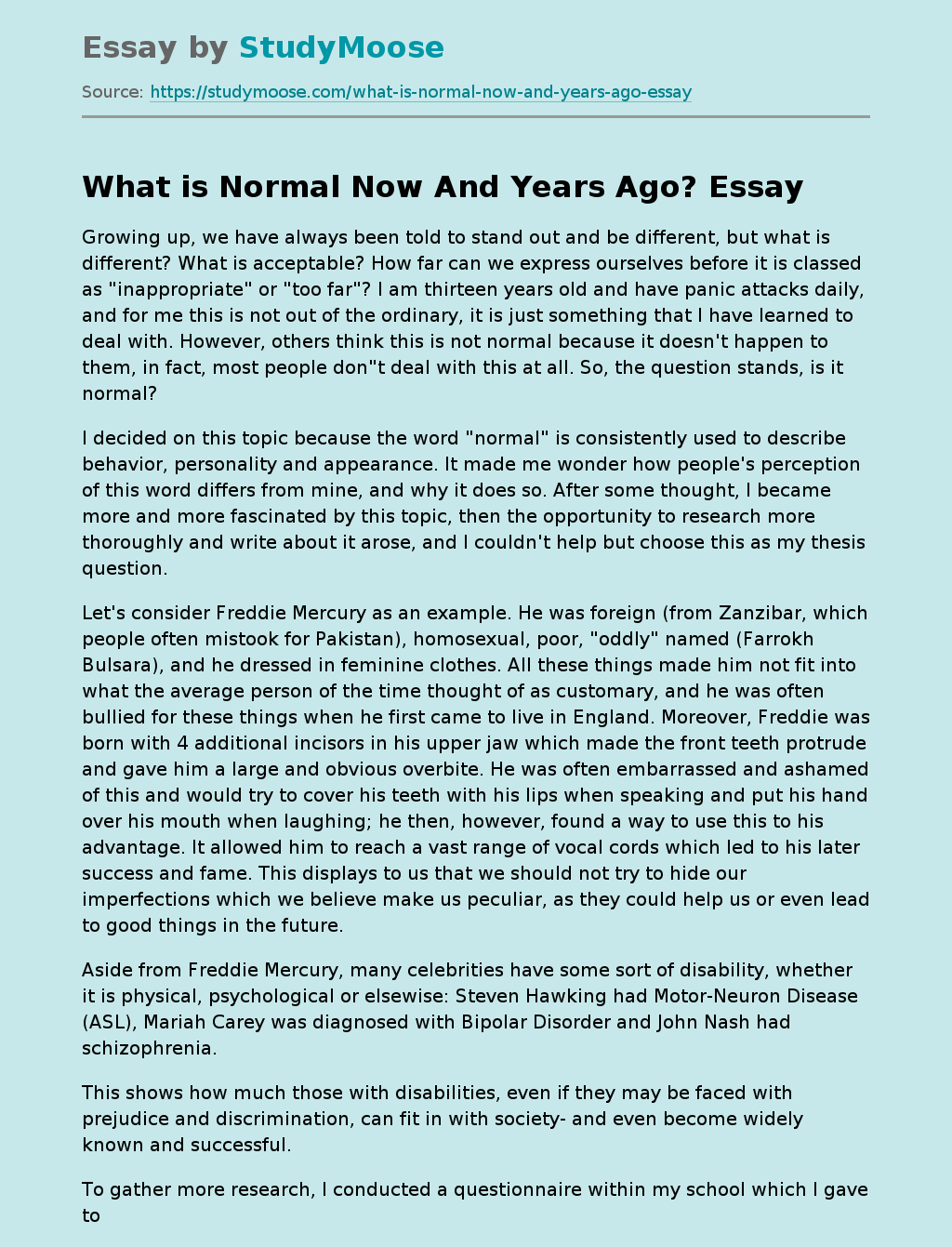