What Is a Vegan and Why You Should Consider Veganism?

As we have mentioned previously, veganism means to eat a vegan diet and sometimes to live a vegan lifestyle. There are many different reasons for going vegan, which means there are different types of vegans. Here are some types of vegans.

A dietary vegan is someone who abstains from animal products in their diet; this means that you would not eat anything that contained animal by-products, including dairy, eggs, meat, and even honey. However, veganism can also extend beyond the diet and include ethical and environmental concerns as well.

Don't use plagiarized sources. Get your custom essay on
“ What Is a Vegan and Why You Should Consider Veganism? ”
Get custom paper
NEW! smart matching with writer

For the purposes of this book, we will focus on dietary veganism.

Ethical vegans are against the use of animals for any reason whatsoever. They do not buy or use any products that are made using animals. This would include things such as fur rugs or coats, leather, soap made from tallow, cosmetics, grooming products, and any products that are tested on animals.

Environmental vegans are similar to ethical vegans, except they do not use animal products because they believe that industrial farming is bad for the environment and is unsustainable.

For example, environmental vegans think that the production of cow-derived products is harmful to the environment because the cows produce methane that contributes to greenhouse gases.

While the term veganism has only been around less than 100 years, history has shown evidence that some people avoided animal products over 2000 years ago. [20]

In terms of modern history, veganism is not that old of an idea; less than 100 years believe it or not.

The word “vegan” was first coined by a man named Donald Watson. In November 1944, he co-founded the Vegan Society in England, which still exists today. [21]

The group who founded this society wanted to do more than only avoid eating meat. They also eliminated dairy and eggs; thus, veganism was born. Not only did the Vegan Society not eat any food made from animals, but they also explained early on that they didn’t use any animal products. So from the beginning, the members of the Vegan Society viewed veganism as something more than just related to diet. [20]

Since the 1940s, veganism has increased in popularity. It’s easy to see why. We live in the information era. Today, we have easy access to digital information online in the form of eBooks, audiobooks, articles, and videos. So it is no surprise that the benefits of going vegan became very popular once published.

Also, there are more restaurants offering vegan options. And, more grocery stores are offering a wider selection of vegan-friendly foods.

Veganism has been associated with good health, which is a big reason why more people are going vegan. The ethical considerations around eating other living beings are a sore point for most other vegans, but the health benefits should not be overlooked.

Studies have shown that plant-based diets not only reduce the risk of heart disease, but they also help to control type 2 diabetes and cancer. A plant-based diet can even help to prevent premature death. [8][23][24] Another common reason that people lean toward veganism is because of concerns over eating chicken, cows, and other animals that are given large amounts of antibiotics and hormones.

What Is a Vegan and Why You Should Consider Veganism?. (2020, Oct 01). Retrieved from https://studymoose.com/what-is-a-vegan-and-why-you-should-consider-veganism-essay 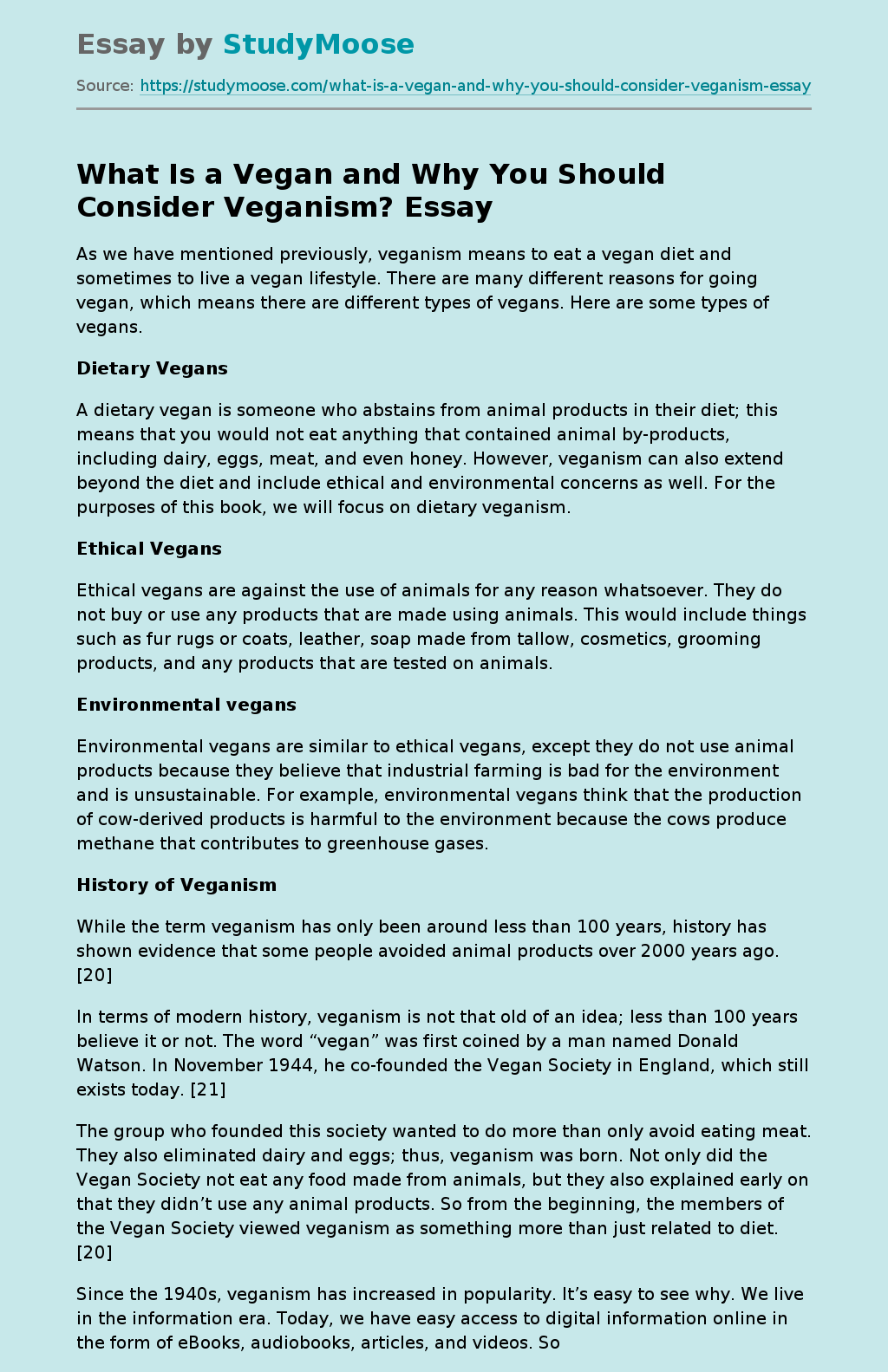