Why you should not spank?

Spanking does nothing to teach a child to develop inner discipline. A child’s focus is on the spanking itself, not on a review of the behavior that led to it. After a spanking, a child does not sit in his room and think, “Gee, I sure goofed. But I really learned something. Next time I’ll behave.” Instead a child is typically thinking, “It’s not fair! She doesn’t understand! I hate her.” Another problem with spanking is that spanking is seen as punishment for a crime, payment for a debt.

Don't use plagiarized sources. Get your custom essay on
“ Why you should not spank? ”
Get custom paper
NEW! smart matching with writer

In other words, once paid, they have a clean slate. Spanking gets in the way of allowing a child to develop a conscience. The guilt that follows misbehavior is a prime motivator for change. Spanking takes away the guilt, because the crime has been paid for.

A harmful side effect of spanking is that it makes the parent feel better. When we get angry, we move into the “fight or flight” mode.

Our adrenaline increases, and we have a primitive need to strike out. Hitting releases this negative energy and helps us feel better. But even a minor spanking can escalate into major abuse. Parents have reported that during the heat of the moment it’s hard to stop hitting, and some say that they don’t even realize how hard they’ve hit until they see the bruise.

Spanking gets in the way of a healthy parent-child relationship. Children look up to their parents as protectors, teachers and guides.

When a parent breaks that pattern by hitting a child, the relationship suffers.

Positive parenting and alternative forms of discipline reinforce the values we want children to learn, without physical punishments. Parents can use positive discipline, which involves defining acceptable behavior and reasonable consequences for kids that break the rules. Discipline gives children the structure they need to take control and become responsible for their behavior. Parents need to manage behavior instead of emotions. Parents need to be able to put away their feelings of frustration or upset and address the behavior that’s causing all those emotions in the first place.

Although structure and routine is key, balance is also important. Parents shouldn’t be too rigid or too flexible. If it’s your child’s birthday and she’s grounded, you should waive her punishment for the day and resume the grounding the next day. And as with anything related to parenting, you must look at a child’s development, to see if they may have an emotional or learning disorder that explains the challenging behavior.

Something as simple as positive language can go a long way toward setting boundaries. Don’t focus on the negative. “Parents must set targets, give positive feedback and always redirect the negative behavior into positive reinforcement,” says Masterson. Try saying yes, instead of starting each answer with no. If your child wants ice cream before dinner, say ‘yes, you may have ice cream after dinner.

Spanking does teach a lesson. The lesson is: “When you don’t know what else to do – hit!” or “When you’re bigger you can hit.” Or “When you’re really angry you can get your way by hitting.” It’s common knowledge that children who are frequently hit are more likely to accept the use of violence and are more likely to hit other children. It only makes sense, because, after all, children learn what they live. Children who are spanked often have more resentment and anger and lower self-esteem.

Why you should not spank?. (2016, Jul 24). Retrieved from http://studymoose.com/why-you-should-not-spank-essay 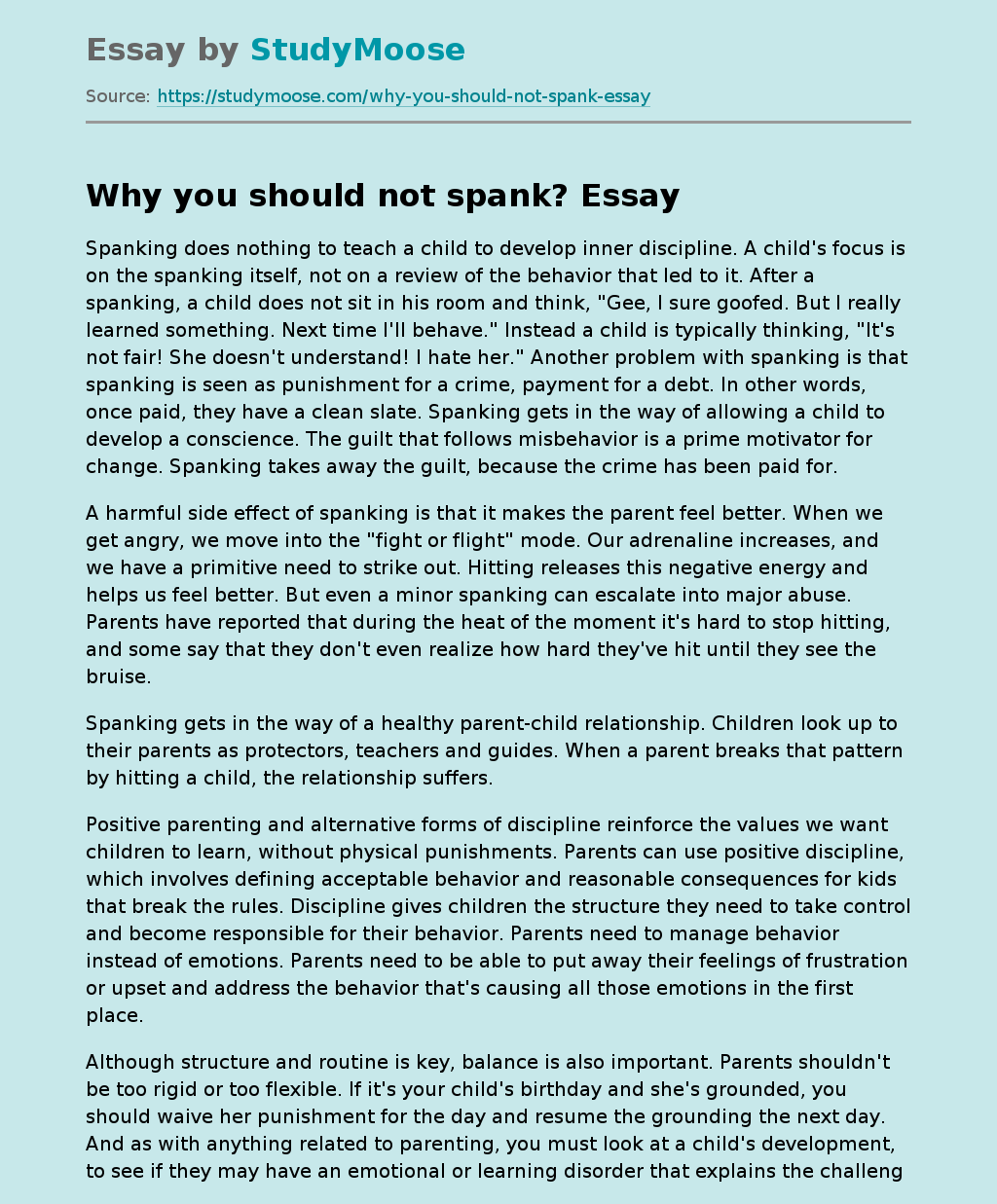