Were any constitutional rights violated in this case? If so which

Were any constitutional rights violated in this case? If so, which ones.

Don't use plagiarized sources. Get your custom essay on
“ Were any constitutional rights violated in this case? If so which ”
Get custom paper
NEW! smart matching with writer

Explore the tort theories of assault, battery, and trespass and discuss how they apply in this case.

Assault- An assault occurs when one person places another in fear or apprehension of an immediate, offensive bodily contact (Kubasek, P.198).

This tort applies in this case because of Betty’s student informant, Snitch, was involved. Snitch hit Betty in the head with a rock he threw to break a window which resulted in him committing assault.

Snitch was trying to save Dr. Pickles but accidentally hit Betty in the head. Snitch still committed assault because he placed fear another in fear or apprehension of an immediate, offensive bodily contact into Veronica.

Trespass to Personalty- Temporarily exerting control over another’s personal property or interfering with the owner’s right to use it (Kubasek, P. 211).

The trespass to Personalty tort could apply to this case study if Betty did not own the off-campus newspaper office. If the university owned the office, Betty would have temporarily exerted control over personal property or interfering with the owner’s right to use it. Betty swallowed the key in order for Mr. Pickles to not attain the key to escape.

Who should be held liable for damages and what damages might be available to the plaintiff?

If you were in charge of manufacturing Veronica’s medication, would you consider it your ethical obligation to list all potential illnesses that may result from your product? Discuss why or why not.

Should Veronica be forced to settle her claim through arbitration? Discuss why or why not.

In my personal opinion, Veronica should be forced to settle her claim through arbitration because on the pill bottle there was a disclaimer. Veronica used the product without reading, resulting to be in an implied-in-fact contract. Veronica was given medicine from Medi-Made to use but could have rejected it. It is Veronica’s fault to continue using the product. Veronica knew that side effects could arise but did know migraines could be one of the side effects. In conclusion, Veronica continued taking the medication and did not switch to another medication, therefore she will have to go through arbitration which Medi-Made implied.

Presume that Veronica does not want to enter into arbitration with Medi-Made. What other forms of alternative dispute resolution might be available to her?

Were any constitutional rights violated in this case? If so which. (2019, Nov 21). Retrieved from http://studymoose.com/were-any-constitutional-rights-violated-in-this-case-if-so-which-example-essay 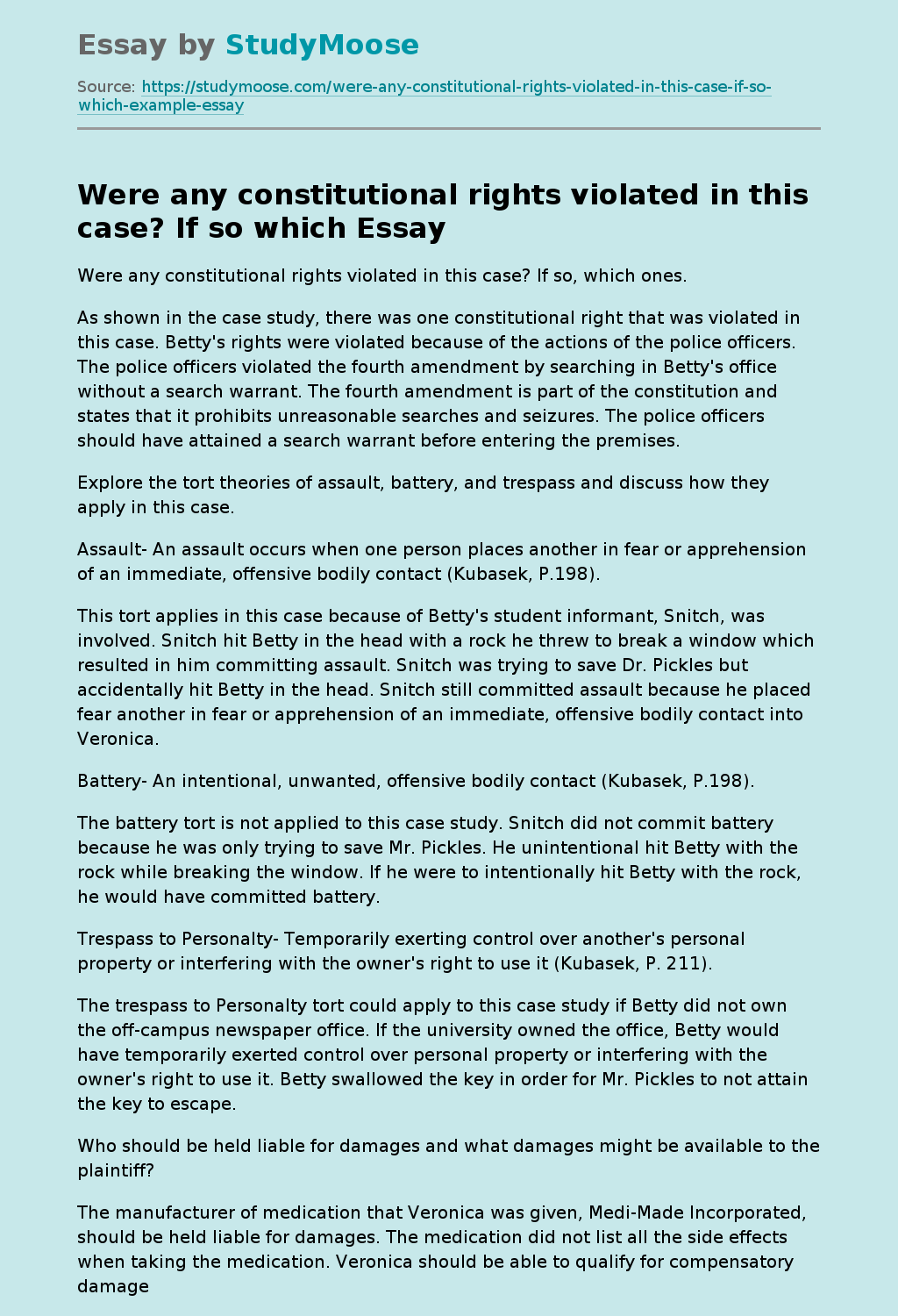