Questions
1. What sort of environment (hypertonic, isotonic, hypotonic) does consuming excessive amounts of pure water create in the body fluid that surrounds your cells? What effect would this have on your cells?

– A hypotonic environment would be created in the body fluid, as there would be a lower concentration of solutes outside of the cell than inside the cell. This would create the effect of water entering the cells at an abnormal rate, and the cells, eventually, would burst.

2. What types of symptoms did Jennifer, Cassandra, and James have in common? Which organ or tissue seems to have been most affected?

– Dizziness and headaches were symptoms in common with Jennifer and James.

Turn in your highest-quality paper
Get a qualified writer to help you with
“ Water Can Kill? Exploring Effects of Osmosis ”
Get high-quality paper
NEW! AI matching with writer

It could be assumed that Cassandra had similar symptoms, as there was swelling of the brain found during autopsy. The brain seems to be the tissue most affected by such conditions.

3. Keeping in mind your answers to questions 1 and 2, what do you think the immediate cause of death was for Jennifer, Cassandra, and James?

– Swelling of the brain, and bursting of the cells within was the most likely cause of death.

4. If you suspected that a patient’s symptoms were caused by the condition suffered by Jennifer, Cassandra, and James, what kinds of test would you run to confirm your suspicions?

– Tests should be run to see how much sodium is in the body, available for use. Electrolyte tests should give an idea of the concentration of salts.

5. Once you knew the cause of their symptoms, what kind of emergency treatment might you try for a patient like Cassandra or James if you were the doctor in charge of their care?

– Emergency treatment could involve a highly concentrated salt solution, some sort of dehydrator to bring the tonicity back to an isotonic one.

6. Why do you think doctors administer a saline solution instead of pure water to dehydrated patients?

– If pure water were used, the body’s solution would be too low in salt concentration.

Part II – Facts about Hyponatremia
Questions
1. During periods of intense activity, your body releases an antidiuretic hormone called ADH or vasopressin that causes the body to retain water (by decreasing the amount of water that is expelled in urine). Why does this make endurance athletes particularly vulnerable to developing hyponatremia?

– Endurance athletes are particularly vulnerable because over the extended period of time they are not taking in salt, only water. This creates the hypotonic environment outside the cells because of the salt concentration differential.

2. What might put desert-dwellers in danger of developing hyponatremia? How can they avoid this danger?

– Desert dwellers could potentially continue drinking water without ingesting enough sodium to keep the fluid around cells isotonic. Eating food with plenty of sodium or by adding salt to food so as to retain water.

3. Babies and small children are at much greater risk for developing hyponatremia than adults. Why is this?

– This is because they have less cells in general, and their bodies aren’t able to take as much damage.

In other words, find what the new volume of the brain would be once equilibrium was reestablished. Assume that (i) the cerebrospinal fluid is constantly replenished, so its solute concentration won’t change; (ii) only water is passing across the cell membranes into brain cells (not solutes); and (iii) the volume of the brain is mostly water. a. An isotonic concentration is necessary for proper cell operation, so the cerebrospinal fluid would be best as one. 300 mm would work best. b. Dizziness would occur perhaps with a headache, maybe nausea as well. The cells would be swelling due to the hypotonicity of the cerebrospinal fluid, compared to the environment within the cells. 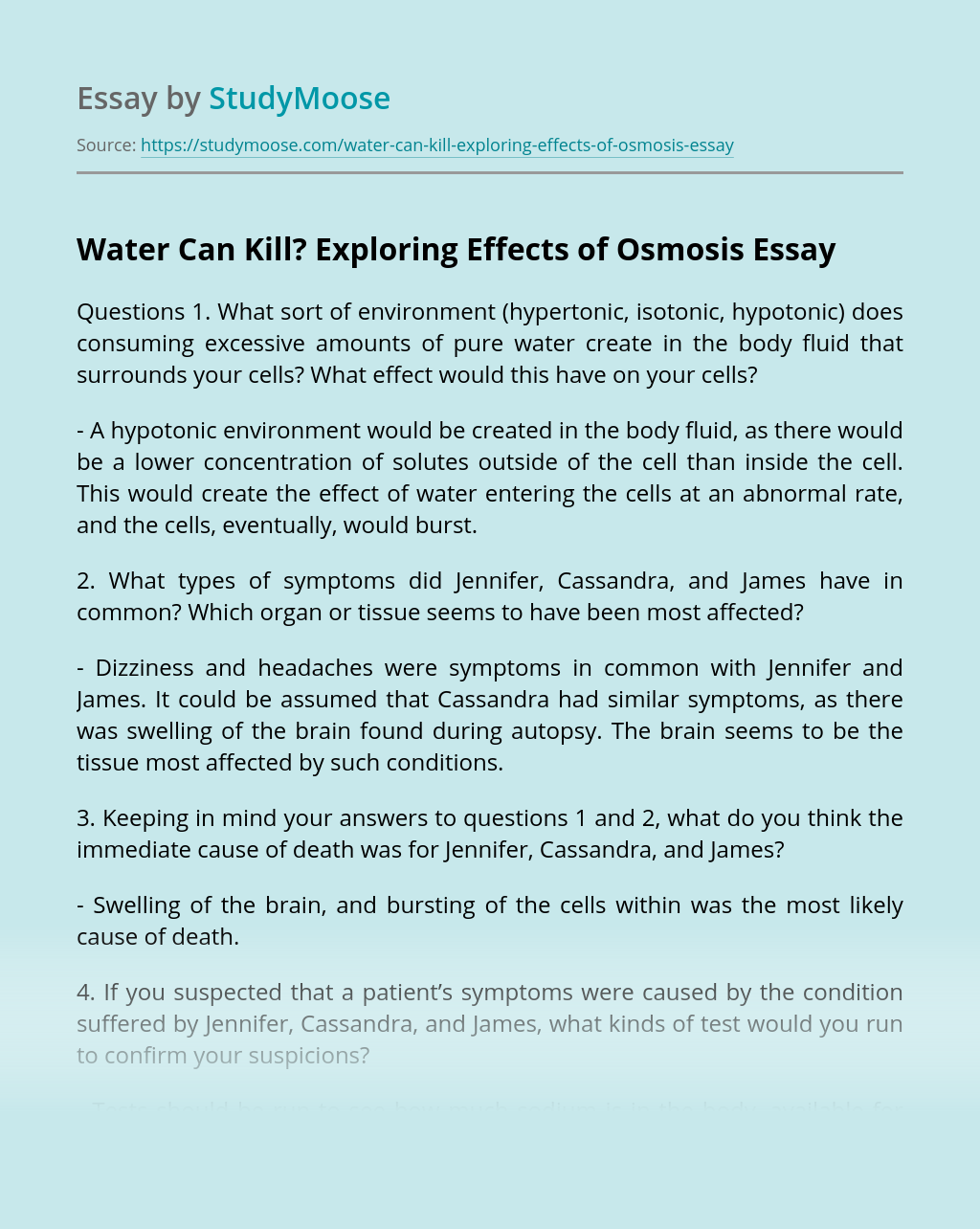 Turn in your highest-quality paper
Get a qualified writer to help you with
“ Water Can Kill? Exploring Effects of Osmosis ”
Get high-quality paper
Helping students since 2015
Stay Safe, Stay Original