To Kill a Mockingbird and A Time to Kill both reflect the common state of life of the American people in the background of the great depression, as well as the estrangement and discrimination between races. These prejudices let innocent people suffer unwarranted disaster, black become a victim of this bias. In To Killing a Mockingbird, Harper Lee described the protagonist, Atticus Finch, as a lawyer who defends a black man named Tom Robinson who was accused of raping a white woman.

Don't use plagiarized sources. Get your custom essay on
“ Teaching Social Justice Through To Kill a Mockingbird and A Time to Kill ”
Get custom paper
NEW! smart matching with writer

In A Time to Kill by John Grisham narrates the protagonist Jack Brigance defends a black father, Carl Lee Hailey, who is accused of murdering two white men that rape Carl Lee’s daughter. A great similarity that established between the stories would be that they are both about a man who seeks justice for crimes he was accused of. Both stories effectively demonstrate the roots and consequences of injustice, racism, and emphasizing that society should treat individuals equally.

Proficient in: Justice In Literature

is very serious. Such a society has led them to have no courage to change the life that is discriminated against. During the trial, when Bob Ewell testified, he pointed to Tom Robinson and says, “I seen that black nigger yonder ruttin’ on my Mayella” (174).

According to Mr. Ewell, Tom Robinson hurts and invades his daughter. In court, Atticus tried to defend Tom Robinson, but the residents of the town had serious discrimination and a biased attitude against him. Even if there is enough evidence to prove that he is not guilty, the jury found him guilty because his dark skin is s sin. Atticus emphasized this idea by saying, “In our courts, when it’s a white man’s word against a black man’s, the white man always wins.” (221). In general, it was a very normal thing for American society at that time. Tom Robinson was punished by the people of Maycomb because he did not have the ability and the right to support change the situation. As a result, people determine his life only through the evaluation of others and his identity. Tom Robinson was an example of the blacks of that era at the time, and they could not have rights or even had no opportunity to justify themselves. It led to his life being denied and abandoned by others. A Time To Kill revolves around a young black girl, Tanya Hailey, who was raped and attacked by two whites. Jake Brigance asked the jury to imagine Tanya as a white girl, which he says: ‘Can you see her? Her raped, beaten, broken body, soaked in their urine, soaked in their semen, soaked in her blood, left to die. Can you see her? I want you to picture that little girl. Now, imagine she’s white.'(156). This quote states that Jack is telling the jury that if an innocent white girl experiences this, will you sympathize with her? Also, imagine why his father will kill the two white of what they have done. This reminds us that we must transcend race, color, and faith and seek equality in the purest form. If you don’t have equality for every single person just by the color of their skin, you can’t feel the pain they suffer and let the real criminal escape. Therefore, equality in society does not exist and is determined by people because of their skin color. But in these two societies, it is necessary to face and change the situation of inequality, making life and the court a fair place.

To Kill a Mockingbird and A Time to Kill confront prejudice head-on, and illustrate that justice is not always color-blind. In To Kill a Mockingbird, Tom Robinson was wrongly accused of a crime by a white man, however, the jury finds Tom Robinson guilty even though he did not actually commit the crime he was accused of, which shows that the justice system is not equal. As Atticus explains to Jem, “The one place where a man ought to get a square deal is in a courtroom, be he any color of the rainbow, but people have a way of carrying their resentments right into a jury box” (221). In the court, Finch proved that Robinson’s left hand was small and disabled, had no ability to violence against others, asked the court to sentence him to acquittal, and righteously appealed to people to respect the facts and safeguard human dignity and equality. However, in the face of a series of facts, prosecutors and juries with deep racial prejudice still believe in the plaintiff and insist on robbing Robinson. Learning to cope with injustice is an ongoing struggle for the book’s main characters, who must continue to fight for justice even as they recognize the difficulty of their quest. In the early days of A Time to Kill, during the illegal early voting, the entire jury decided to convict Carl Lee. After hearing Jake Brigance’s vivid description of Tonya’s rape, the jury felt empathy for Carl Lee. After this statement, the jury changed their decision to not guilty. Justice was served in Carl Lee’s acquittal, and compassion promoted justice. Whatever Carl Lee is guilty, his acquittal will be justified. The two men who raped his daughter “if convicted may have been free in only ten years” (208). This is not an equal punishment for a crime, and many agree with what Carl Lee did. As a result, neither story has a background in equal rights and justice for black people, but both lawyers in both stories are willing to stand up and change societies that are deeply rooted because of injustice against black people. This is where people start changing the view of prejudices, and equal rights for every person.

Racism is perhaps one of the world’s oldest and largest issues. In both stories, deep-rooted racism in southern society prevented Carl Lee Hailey and Tom Robinson from receiving a fair trial and directly affected the verdict in their case. The novel To Kill a Mockingbird has numerous accounts of racism and prejudice throughout the story. The novel is set in the 1930s, a time when racism was very prevalent. The aim of the concept of prejudice and racism of Harper Lee from the point of view of Scout as the main character in this novel. Atticus’s children bullied by children and adults alike because their father is defending a black man. This is presented when a child tells Scout and says: “My folks said your daddy was a disgrace” (76). It is not just children. An adult tells Scout that and says: “Your father’s no better than the niggers and trash he works for’ (102). The entire town seems to be against Atticus and his children because he is defending Tom Robinson, a black man accused of attacking a white woman. The fact that adults and children attack Scout with words and fists demonstrates that racism in the town of Maycomb is deeply rooted. In addition, the older generation in town believed that the African Americans were worthless and that whites should not help them. This happens when one of the children say in the novel: ‘Scout Finches daddy defends nigger, I denied it but told Jem’ (99). Many of the older folks in Maycomb dislike African Americans very strongly. This opinion is deeply rooted in it and even affects the younger generation. In A Time To Kill since Carl Lee Hailey is a black man living in a county that’s predominantly white, and would most likely be tried in front of an all-white jury. His lawyer, Jake Brigance, even tells him so, saying “I could probably get off…I’m white, and this is a white county…I could get an all-white jury, which will naturally be sympathetic” (60). Jake is aware that if his and Carl Lee’s situations were reversed, he would be much more likely to be acquitted of the crime because white people would be more sympathetic to a white murderer than a black one, especially if Jake had murdered two black men compared to Carl Lee killing two white men. In both stories, where both societies do not treat individuals equally because of the racism within Southern society and the justice system itself. Nowadays, legal barriers to racial equality had been removed, and the situation of racial exclusion of social and civil rights had scarcely disappeared altogether as in the past. But discrimination still limits opportunities and stifles hopes for many blacks and other minorities. In the realms of housing, employment, medical care, education, and the administration of the criminal justice system, we are still, as the 1968 Kerner Commission Report on civil disorders warned, “two separate Americas.” At this moment in our nation’s history, it is critical that we move definitively forward in remedying the effects of discrimination. For example, which is to be credited with the creation of an increasingly diverse workforce, has come under intense criticism. Where the blacks worked as farm laborers, or as tenants under the sharecropping system. The biggest problem was the blacks were at the mercy of their white bosses, who would tell them how to vote. As long as our society is ridden with race-based problems, we will need race-based remedies. And while we have come a long way, we still have a long way to go. Due to racism in the two stories, the preconceived notion of the people who ultimately decide their destiny. Overall, racism has become an issue so deeply ground into our society that it has the power to affect our justice system, society and new generation.

The time period of the two stories is located, where racism, equality, and injustice dictated the norms of society. To Kill a Mockingbird and A Time to Kill are similar in the way that Atticus and Jack both stand up for what they think is right even if it isn’t what everyone else believes. They both believe in equality and don’t believe in discrimination. Everyone has a desire for fairness, justice, and kindness in their hearts. Even in the harsh racial discrimination and the destruction of human nature in the context of the Great Depression, this desire is the same, but people sometimes may not dare to speak out their inner voice because of fear of the dark forces. Overall, it teaches people how to treat people equally no matter what skin color we have, accumulate righteousness in unfairness, how to shape their moral bottom line in a world full of ugliness and problems, and maintain a spiritual descent.

Teaching Social Justice Through To Kill a Mockingbird and A Time to Kill. (2021, Mar 02). Retrieved from https://studymoose.com/teaching-social-justice-through-to-kill-a-mockingbird-and-a-time-to-kill-essay 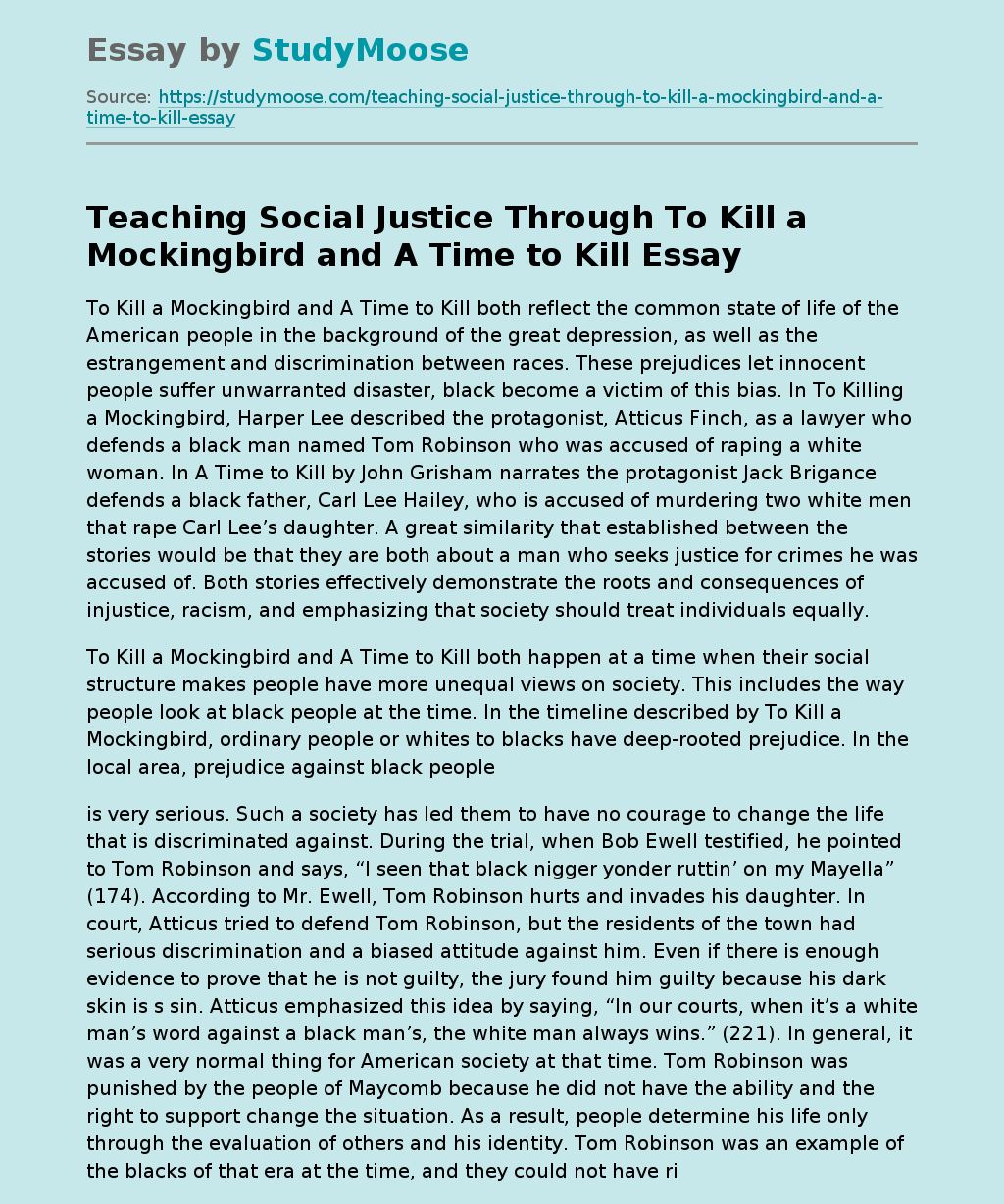