World is compared to a beast ‘the World’s a beast of burden”. This world can be understood as the world after the World War which disturbed Virginia Woolf. In her suicide note to her husband Leonard Woolf, Virginia talks about this world and the ‘terrible times” which she cannot hear anymore. She says ‘I feel we cannot go through another of these terrible times. And I shan’t recover this time”. Virginia Woolf suffered depression and World War completely shatter her peace of mind.

Don't use plagiarized sources. Get your custom essay on
“ That’s what the water gave us the water gave me ”
Get custom paper
NEW! smart matching with writer

Her house was bombed and it became the final blow, which she couldn’t go through and drowned herself near her house.

There are two obvious truths of life. The first being that ‘you are born’ and the second ‘your death is inevitable’. We must accept the bitter truth of life i.e. inevitable death and live our life before the death. Florence’s song is very philosophical. Woolf had lost almost everything that was dear to her.

She was in utter hopelessness and this was intensified after, the WorldWar1. Her concern for a peaceful world led to her misery and ultimately, she committed suicide. The stones in her pocket resembled or signifies the burden of her life which she even carried after her death. Florence song has beautifully and wisely depicted the way Woolf committed suicide.

The mind of a man is like deep water with lots of thoughts, secrets inside it. ‘William James coined the term ‘Stream of Consciousness’ in his book Principles of Psychology.

” (Wikipedia.org>wiki>stream of consciousness) Later this technique adopted by almost every modern writer. Virginia Woolf also experimented with this new technique in many of her novels like Mrs Dalloway, To the Lighthouse and later established herself as a writer of ‘Stream of Consciousness’ novels.

In the Early Twenties there was a sudden rise in ‘Stream of Consciousness’ novels. The breakdown of accepted values which began with the World War 1 created the need of new value system. So, the novelists refused to accept the previously established norms and relied more on their philosophers. Philosophy which is the scientific study of the human mind and its function, which further affects our behavior, influenced twentieth century science and social thoughts.

Philosophers like Freud, Bergson, Carl Jung come out with their new theories. Bergson on the one hand gave a new concept of time ‘La Dur?e’, which refers time as conscious ‘flow’. He further divided time into two parts the inner and the psychological time and the other one is the clock on mechanical time. Freud on the other hand studied the human mind and gave the concept of three levels of mind-conscious mind or ego, the preconscious and, the unconscious mind.

‘Stream of consciousness’ represents the consciousness of character which includes the thoughts, feelings and perception of a character. Virginia Woolf was quite unsatisfied with the precious forms of writing which she discussed in her famous essay ‘Modern Fiction”. She goes a step further from James Joyce who has used the term. She shares her dissatisfaction by Joyce’s use of Stream of Consciousness in a way that ‘It fails because of the comparative poverty of the writers mind; we might say simply and have done with it. Confined and shut in, rather than enlarged and set free.” (Woolf, Modern fiction,247)

Stream of Consciousness has a water like flow in the mind of the character from thought to another. The human mind is constantly working it never stops unless it’s dead. So, these conscious flows of thoughts is similar to the ‘Stream’ or flowing water. This flow is within the mind. Along with this technique modern writer use to explore the ‘Psychological time’ which Bergson in his theory of ‘La Dur?e’ refers to. It is this Stream of Consciousness which unites the character as well as keeps the narrative moving. The ‘Flow’ of thoughts connects the different strands and make it into one single strand. Similar to the thoughts, in Bergson, theory of ‘time’ which says that psychological time which rejects the idea of division of time is past, present and future. Past, present and future are connected as the time moves on never stops thus our present behavior and experiences are result of our past experience and it further shapes our future. Thus, this water like quality of ‘flowing’ like a stream in present in Virginia Woolf’s novel.

In her novel Mrs Dalloway readers peeps into her life through this ‘Stream of Consciousness’ and it shifts from present to past and again comes back to the present. Mrs Dalloway’s present situation is based on her previous experiences with Peter Walsh, Sally Saton etc. Thus, the human psyche is understood in these modern psychologies as a ‘Vast fluid’. The consciousness moves from one character to the another. In the scene when Dalloway come across Hugh Whitbread, she remembers Peter Walsh, thus through her consciousness we come to know about her past life at Bourton and her relationship with Peter Walsh and Sally Saton.

Virginia Woolf herself possessed ‘water ‘like qualities. Woolf has different approach towards the life. Her view on life she expressed in her essay Modern Fiction included in ‘The Common Reader’. She writes ‘Life is not a series of gig lamps symmetrically arranged; life is a luminous halo, a semitransparent envelope surrounding us from the beginning of consciousness to the end.” Life for is no fixed, it has a fluid like quality moves on. Nor it is a series of gig lamps arranged systematically. Virginia Woolf mold herself according to the time.

With the end of Nineteenth Century, Earlier traditions and system also came to an abrupt end. With the rise of Industrialization, the whole economy took a topsy-turvy turn. Scientific discoveries led to rationalism, which future questions the Earlier accepted system of beliefs and Traditions. This critique from all the side made the commons man’s life even more complex. Man was confused between what is right and what is wrong. World War 1 triggered the modernism and the generation after the World War 1 experienced complete loss of ‘faith’ from the traditional modes of thinking. This disintegration of faith and traditional belief led to the rejection of earlier forms of writings in literature also.

Modernist writers like Virginia Woolf took a new shape like water, which takes the shape of a container in which it is poured. Virginia Woolf rejected the previous forms of writings and accepted the new techniques and forms. Just as water is considered to be universally solvent, Woolf also dissolved herself into the new times. They believed in portraying the reality and remain clear and transparent like the ‘water’. Complexities of the outer world had effect on the consciousness of a man and these complexities are explored by the writers in their novels. The modern novel is realistic, all the facts of modern life are presented realistically. They rejected to portray one sided view of life. Literature is mirror to the society, so if the outer world is full of chaos the same will be reflected in literature also.

Thus, Virginia Woolf has water like qualities as she has mold herself according to the need of time. 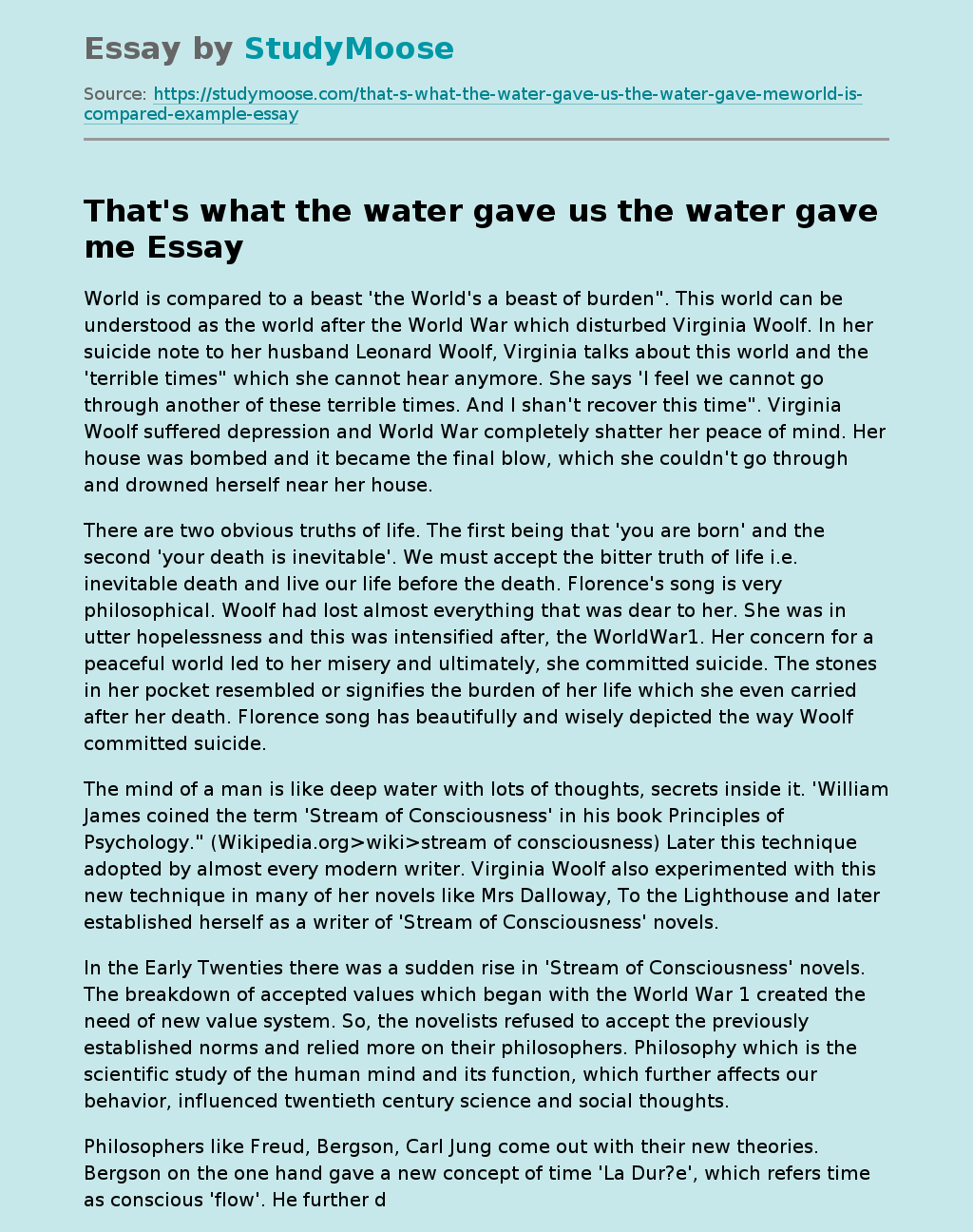