Violence on TV is bad for children and should be banned

Mass media influence refers to the effects the media like TV, radio, internet and magazines have on their audiences and control the way they think and behave. Media have a strong influence to the society and also form a barrier between the society and the outside world. Children who view violent programs on TV tend to have more aggressive behavior late in life compared to children who have no access to violent programs on the TV or have some restrictions to watching such programs.

Don't use plagiarized sources. Get your custom essay on
“ Violence on TV is bad for children and should be banned ”
Get custom paper
NEW! smart matching with writer

According to the study that was done by the University of Michigan institute for social research, the effects of watching such programs are the same for both male and female. The issue of violent programs on the TVs has been there for a long time. There are numerous programs that contain violent scenes such as murders and rapes that are commonly considered as inappropriate for the adolescents. According to the study, an average child watches TV for about 27 hours per week which can also be calculated as 11 hours per day.

In this regard, a child will have watched about 8000 murders and about 100,000 acts of violence on TV before completed his/her elementary education. Most of the violent acts contain gunplay, destructions, invasions and other criminalized acts. This brought about the question as to whether the violence on TVs is bad for children or not and whether it should be banned. (Black, & Jennings, 1995) Restriction to banning of violence programs on TV There is a big conflict among the people who advocate for the banning of programs that contain violence on TVs.

Other people believe that programs that contain violence are more interesting compared to programs that are free from violence scenes. The big problem with the banning of the violence programs is that the TV stations have the right to freedom of speech. In this regard, the television stations have the right to air any program including those with violence scenes. The TV viewers argue that if the televisions are restricted to air such programs, they would therefore have been denied their freedom.

The reason why the violence in televisions programs receives many critics is because some of the children confuse the acted programs with reality and end up imitating what they see on TVs. When a child see a great deal being struck, they think that its right to imitate what the actor is doing on TV of which is against what their parents want them to get from the program. Example, a child may commit an act of crime and when asked the reason for doing so, would respond that he saw it on the TV. In some other cases, the societies tend to react more in the issues where children are involved.

Children tends to blame what they watched on TV for anything they do including acts of crime and irrespective issues like using abusive languages, stealing and harming others. It’s also believed that most children do differentiate between what is and acting on the TV but pretends to know as an excuse of committing offences. (Medved et al, 1998) Supporting the banning of violence programs on TV Those who strongly support these are parents whose children are exposed to these violent programs. So many individuals, groups and organizations have complained to various TV stations regarding the programs they air.

On the other hand, TV stations claim that there are other issues that affect children more than violence. They claim that sex, alcoholism and use of drugs shown on TVs affect children more than violence and they are the one that should be more limited than violence. TVs also advocate that limiting violence on the shows would not have much impact than limiting sex and alcoholism. (David, 1981) In any state or country in the world, the respective government has an authority and power to force any TV station to edit and regulate the amount of violence in a given program that is being aired.

Even though it has power, they have no right to force any network to cancel such programs as that would be violating their freedom. Nowadays, most networks are adjusting what they air as they would not want to go against the society. The world has positioned itself in a better politically and that has contributed to the adjustment of marching the media and society. When the society demands that some things must be eliminated from the shows like sex, violence, drugs and alcoholism from the eyes and ears of children.

The programs that are aired on the television should match what the viewers’ wants. Though the parents have the responsibility to play on this, they should be blocking the programs they don’t want their children watch. This is because they have no power to dictate what should be aired or broadcasted by any given station. Most stations have adopted a trend of having programs with no violence during the day and airing other programs late at night to serve both kinds of people in the society. (Carter et al 2003) How violent TV shows impact children

Younger children are the most affected by the TV violence because they spend most of their time watching. Children between the age of 2 and 5 spend about 28 hours every week watching TVs. The number of hours reduces as the age goes up. At a normal life span, a man would have watched for 10 uninterrupted years, day and night without a break viewing thing and programs that he has no control of and are not of his choice. According to the research that was done US news, 91% of the people interviewed revealed that TV violent programs contributes to real life violence.

It also showed that, most of the crime that happens in America is steered by media and only small percentage has power to control it. Generally, the TV presenters and other parties concerned have the overall right to decide what to be aired. The society has no say on what amount of violence should be portrayed on the TV. There is a grate need to evaluate what children are exposed to and what consequence this could have on the children. There is a need for the parents to decide what their children should watch on the TV as failure to this, there seems to be no other person who could help in this.

According to psychological research, children are less sensitive to pain and suffering of others or even to the world around them. More so, they tend to act aggressively and would harm others without any worry. The more children are exposed to violence, the more they become less bothered to violence in real life. Children, who watch violent shows are likely to disobey, are rude and in most cases they keep on harassing their mates. (Tristani, 2002)

Violence on TV is bad for children and should be banned. (2017, Feb 23). Retrieved from https://studymoose.com/violence-on-tv-is-bad-for-children-and-should-be-banned-essay 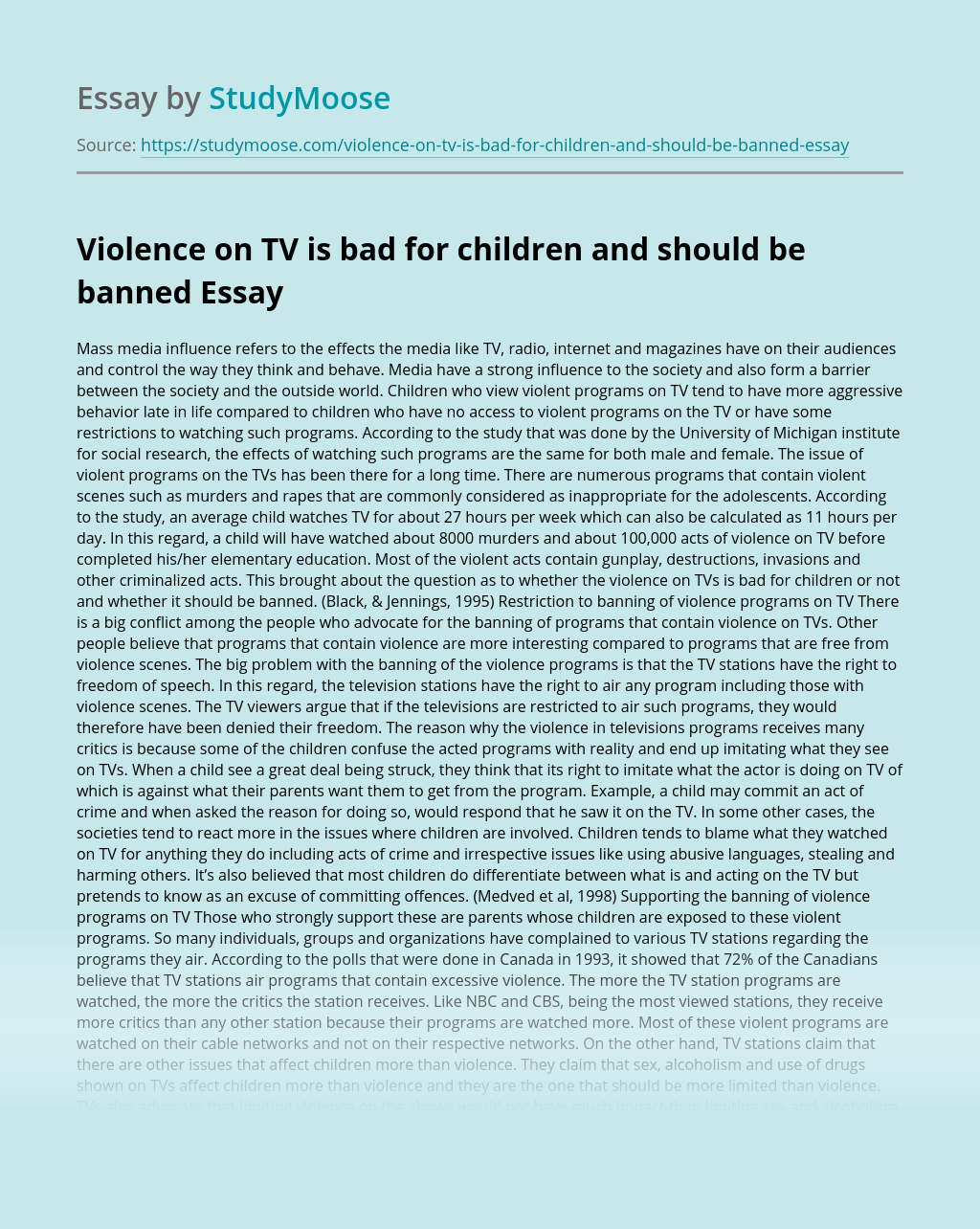