Quote – “What are they [children] to make of your bullying, Your despair, Your cowardice and all your fondly nurtured bigotries?” (P. 116 Frame 2)

This quote from book 2 is a part of V’s work to cause civil unrest in England, through undermining the fascist Norsefire regime. After killing or incapacitating everyone who could have identified him, V proceeds to make himself more public and known to the average citizen, as before his actions had mostly affected government officials and the police force.

Don't use plagiarized sources. Get your custom essay on
“ V for Vendetta Quote Analysis ”
Get custom paper
NEW! smart matching with writer

To accomplish that he storms the main NBS building with a bomb vest on, forcing the news crews to play his videotape with his prepared message on it. His message illuminates humanities’ history through the times, beginning with the evolution from apes, through the rise of civilizations, and the major wars and dictators. He exposes society’s biggest problems, like unwillingness to lead or solve problems. Although the great accomplishments of humanity do not go unnoticed, the main focus stays on the problems facing current society.

The lack of opposition to the regime and acceptance of the Supreme Leader (Adam Susan) does not go unnoticed, and in the end, V calls citizens of England to redeem themselves at the end of his speech.

As this quote mainly reflects the beliefs and the spirit of the people of London, the biggest connection that can be made is between said people that the quote describes is to the situation in England in the 1970s and 1980s. At a time where major scandals were being discovered monthly, fighting with domestic terrorist groups like the IRA turned more violent, and other instances of the government’s inability to deal with problems became more apparent, many people’s frustrations lead them to point towards different reasons for the problems, beginning with antisemitism, and the government proposed actions about the homosexual community in England.

As the connection arises between the book and the times experienced by the author, the New Historicism school of thought is prominent here, allowing the author to reconnect his work with the society and the political scene of his day, and voice his concerns through his creation.

When V is speaking to the people of London, his carefully chosen words strike deep into people’s hearts and minds, raising doubt and foreshadowing change. This part of the lecture serves especially to pinpoint where the people are at fault and foreshadows that some part of V’s plan might be aimed at fixing, or changing this side of the rotten practices that post-war Britain had developed. This quote and what it alludes to is also aimed at the reader, as it addressed the countless portrays of violence found earlier. Through the unveiling of the immorality of such acts, the writer makes a direct allusion to earlier scenes of violence in the story and simultaneously provides the reason for their existence- despair, cowardice, and bigotry. It is illustrated that the inhabitants of London experience similar sensations in frame 7 on the same page, where a family sits frozen in front of their television set, absorbing every word in utter silence. The provided insight into V paints him as a careful informer, not a manipulator, gives a moral high ground to V throughout his campaign, and proves that he would rather deliver bitter truth, than the sweetest lie.

Through my profound interest in history and more precisely military history, the fact that a public broadcast of this nature was made in a totalitarian police-state defines V’s announcement as a call-to-arms for the listeners to rise against the government. The exact words used in my selected quote do not fit in this formula though; they pin the blame on the people, not the government. From that revelation, this quote struck me especially hard, as everything that is pinned on the average citizen of England was true. In fact many of the actions we have seen before multiple times, like bullying of weaker by the stronger; cowardice to act in time of need; bigotry and the Us-against-them-ideology. These examples can be connected to today’s events where these acts still happen and have similar effects to what V describes in his speech.

Was the situation in Author’s Home similar to what V described? Could that be a possible reason to write this quote? V for Vendetta can be been as a political protest of the Author against what was going on in England in the 1980’s. If he was living in a different country at the time, would he still write this book? V assumes the role of a “governor” when he is speaking to the people. Is he impersonating god here? 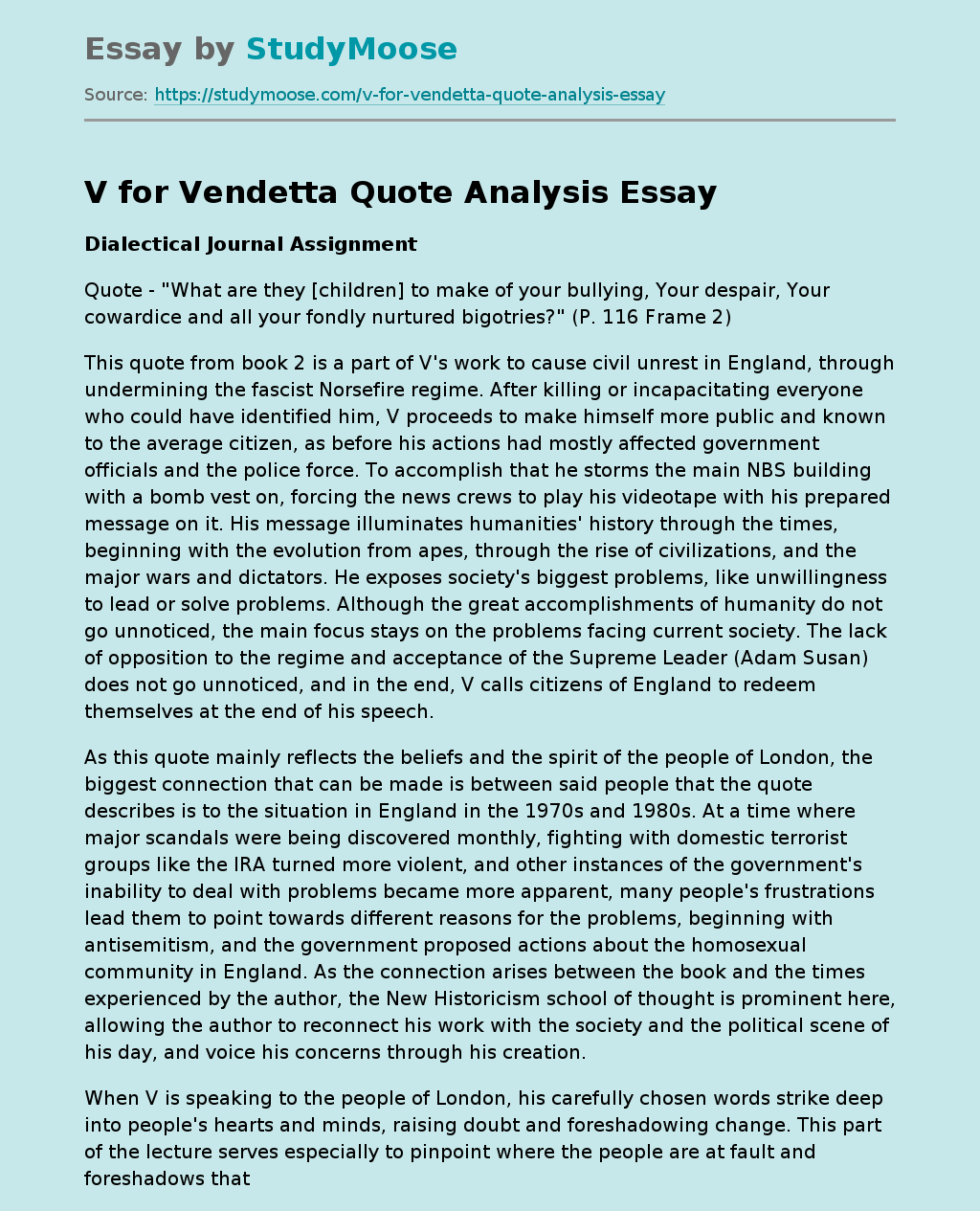