Analysis of the Movie “V is For Vendetta”

In the context of the modern world, movies are arguably one the most capable medium that can influence a very large percentage of the public. It is just unfortunate that that there are only a handful of movies that has something to say about the society. One of those select few of socially relevant movies is “V For Vendetta. ” What is very remarkable of the film is that although the narrative is just fictional, it talks about a very real and much discussed issue.

Don't use plagiarized sources. Get your custom essay on
“ Analysis of the Movie “V is For Vendetta” ”
Get custom paper
NEW! smart matching with writer

The issue of terrorism has been the talk by simple crowds to international news.

The term “terrorism” brings along so many negative stereotypes, the mere mention of the word could even strike fear—or to put it simply, terror. Going back to the movie, V was tagged by the tyrannical Norsefire as a terrorist. With that being said, it would be important to ask: is V, the protagonist of the story, a terrorist? But before we traverse further in the discussion, perhaps it would be helpful if we would first have a review of the definition of the term.

The word “terrorist”, according to the Merriam-Webster dictionary, is referring to an individual or a group that utilizes terror in a systematic manner as a means of coercion (Merriam-Webster Online Dictionary) Moreover, there are instant stereotypes that are associated with terrorists. The concept and concept of being a “terrorist” was somewhat manipulated. This is not just visible in the movie, but also in real life. Norsefire calls V a terrorist, just as the US government calls the Taliban of the Al Qaeda.

In many sense, Norsefire and the US government has control over the definition of the term.

The audience could fell a tremendously profound irony when Norsefire calls V a terrorist. Just as shown in the movie, Norsefire has complete control over what goes out in the media. A line in the movie provides us an explicit statement “this is BTN our job is to report the news not to fabricate it, that’s the government’s job. ” In the context of the movie, the government manipulates the media. There was a scene wherein Gordon satirizes Norsefire in his television show. This is one of the few humorous and light scenes in the movie.

But just shortly after that, Gordon’s home was brutally raided by the police of the Norsefire regime. This action of the Norsefire rule has striking and disturbing similarities to the USA Patriot Act. The USA Patriot claims to be a reaction of the US government to the September 11, 2001 terrorist attacks. The act is formally named as “Uniting and Strengthening America by Providing Appropriate Tools Required to Intercept and Obstruct Terrorism. ” It would be important to note that the law was approved by President George W. Bush (Scheppler 4)

To put it simply, the USA Patriot Act expanded, arguably exponentially, the US’s government’s authority in fighting local and international terrorism. The Act endows the government extensive legal powers to utilize to fight terrorism. Under the powers of the act, the government has the power to search anyone’s property provided that the individual is accused of being a terrorist. What had transpired in the home of Gordon could happen to our homes if such a powerful law falls under the control of the wrong people. At this point, the query that is more likely to arise is: who are the real terrorists?

Who is the real guilty ones of the real terror? Political powers similar to the act, just as the Norsefire regime’s, could strike more fear in the hearts of people more than any bomb could do. In the context of the movie and real life situations, who has the most destructive capabilities? The US Iraq war is said to be a reaction to the terror attacks. It is regarded by many as such a rash action to take, or some simply, overkill. A similar situation is depicted in the movie “V is for Vendetta. ” In the fight against terrorism, by only one terrorist, an innocent girl was mistakenly killed by Norsefire’s men.

Moreover, it is mentioned in the movie that the Gunpowder Plot was an inspiration of V. In the gunpowder plot, there was a plan to detonate a bomb in the Houses of the Parliament with the intention of sparking a revolution in England. The purpose of the Gunpowder Plot is just mirrored be V’s intentions. The revolution is for the people, not for selfish political intentions—it is actually against selfish political intent. V’s action was for the people, to free them from the oppressive chains of the Norsefire regime. Initially, V was seen as an enemy by the people.

But the people, realizing V’s purpose, immediately changed their view of V and considered him as a hero. But it seems that a hero of the people, who is against the government (that is not for the people), would always be considered as threat. A tyrannical government would always utilize all their political power to stop a revolution. In the context of the US, there are critics who assault the film for sympathizing with Islam. This is such a close-minded and racially offending statement. The critics who approached the film is such a manner had displayed ethnocentrism, or roughly absolutism.

These isms are the key ingredient for what is really terrifying. These isms are what the Nazi regime had believed in, that led to the killing of millions of innocent people. But we cannot blame the people who views V as a terrorist. V’s methods of communicating his beliefs and principles are undeniably extreme. He had introduced himself as someone who is capable of blowing up buildings, not to mention buildings that are populated. V could also be considered close-minded or an absolutist because he only believes in his views and rejects the opinions of others.

V is also guilty of multiple murders, not to mention that he psychologically tortures his victims to insanity before cold-bloodedly killing them. But most notable of all, V is even capable of torturing the people who are close to her, especially Evey. (Cox & Herrle) But of course, V has his own reasons for his extreme actions. It would be revealed in the story that V was part of some government experiment. In a research facility, called Larkhill Resettlement Camp, people like V were subjected to experiments as if they were mere guinea pigs.

V and others were tortured heartlessly by the personnel of the facility. V and others were injected with a compound called “Batch 5”, which many believes to have granted V with above average strength and intellect. V was the only lucky enough to survive the facility. Those personnel are the ones that V had killed later on—thus the vendetta word on the title of the movie. In the context of the real world, the background of those we call terrorist have some semblances to the background of V. The Islam religion has been the target of harsh stereotypes that are attributed to terrorism.

People had forgotten that it was the Christians who first assaulted the Muslims, particularly during the Crusades. Thousands of Muslims were killed during the crusades just because of their faith. In many sense, it was the Muslims who first suffered absolute terror from the Christians. But it seems that history had never depicted the Crusades as a form of terrorism. That is in profound opposition to how quick people interpret an action of Islamic groups as terrorism. Needless to say, the actions of V and the Muslims, which are interpreted as terrorism, are just vendetta, a reaction to the harm that is done to them.

There is another interesting reason for V’s extreme actions. This reason is inline with one of the movie’s main theme: pain is necessary for change. For V, the suffering of some is the price to pay for the liberation of many. This belief of V is best exemplified through how he had changed Evey through torture. It is like an epiphany is only achievable through undergoing a painful process, just like how V was torturously experimented upon and became a revolutionist. Conclusion A terrorist is clearly someone who instills terror to the hearts of people.

V’s effect on the hearts of the people is undeniably in great opposition. V had given the people hope for liberation and reminded them that they should be more powerful than the government. It appears that V is only a terrorist for the Norsefire regime. Norsefire was terrified of V because of his capability of setting the people free, the people who Norsefire had strived to control. It seems like the borderline between the definition of terrorism and patriotism will always be blurred, blurred by the efforts of an oppressive government.

“V for Vendetta” wants to tell us that we, the people should be vigilant of who really is committing real acts of terror. Works Cited Cox & Herrle . Analysis of V is for Vendetta. Retrieved 10 June 2008 http://www. shadowgalaxy. net/Vendetta/vterrorist. html Scheppler, B. The USA Patriot ACT: Antiterror Legislation in Response to 9/1. USA: The Rosen Publishing Group, 2005. Peterman, Eileen. “V for Vendetta (R)”, BoxOfficeCritic. com, 2006-04-09. Retrieved 10 June 2008 <http://www. boxofficecritic. com/reviewsdetail. asp? id=99&pageno=1>

Analysis of the Movie “V is For Vendetta”. (2016, Aug 31). Retrieved from https://studymoose.com/analysis-of-the-movie-v-is-for-vendetta-essay 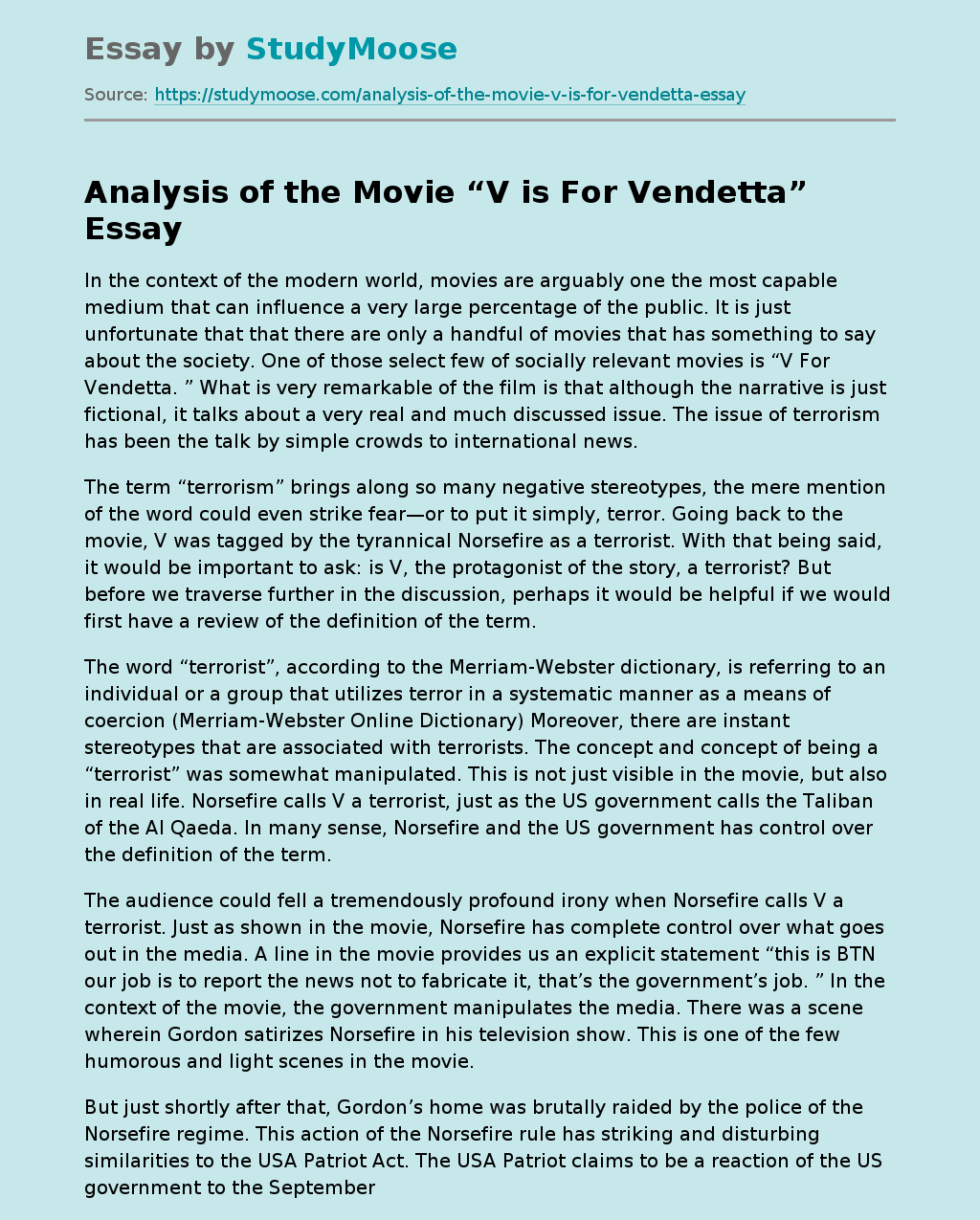