Dystopian Society in V for Vendetta

V for Vendetta, the dystopian film based on the graphic novel by Alan Moore, is the film that will be discussed in this response. The film showcases a world that is ravaged by nuclear war, and is centered on England (more specifically London), which is shown as being ruled over by a fascist party known as Norsefire. The protagonist is an unknown masked terrorist like figure known only as V, who is waging a vendetta against the government for inflicting the horrors of a concentration camp known as Larkhill, of which he is the only survivor.

Don't use plagiarized sources. Get your custom essay on
“ Dystopian Society in V for Vendetta ”
Get custom paper
NEW! smart matching with writer

V is an eccentric character who lives in a place which he called The Shadow Gallery, where he houses artifacts of art and culture which are banned under Norsefire. The film is about how V meets Evey Hammond, a young woman who eventually becomes the next V towards the end of the film, and also how he wages his vendetta against Norsefire – by blowing up various edifices that symbolize the government, and going on air to talk to the people of London directly.

The issues under criticism here are that of totalitarianism and the loss of individual freedom under the same. The prisoners at Larkhill are similar to those tortured in the Nazi concentration camps of the Second World War: they are persecuted for being who they are, because they do not adhere to mainstream values. These people are homosexuals, radicals, black: as a quote from the film aptly goes: “different became dangerous”.

The control that Norsefire exerts is total, which is what suppresses the precious individual freedom and the rights of anyone who does not go by what the party considers acceptable.

Another issue that the film addresses is the mute obedience of the people of London who are, according to V, so comfortable in the order that Norsefire establishes that they neglect freedom and liberty for the sake of this numb security. The acquiescence is responsible for the perverted reality in the dystopian of V for Vendetta.

Quotation from The Handmaiden’s Tale: “Moira had power now, she’d been set loose, she’d set herself loose. She was now a loose woman. ” (Chapter 22, pg. 133) This quotation evokes the character of V in the film V for Vendetta. Just like Moira, V had once been (at Larkhill) a prisoner of the forces of totalitarianism, but strictly in the physical sense. Mentally, both characters prise themselves away from the control being forced upon them — the entire purpose, after all, of these regimes is to have control over individual minds.

Thus, the power that normally would rest with the regime is transferred to the individual: V. He has taken the initiative to disobey, challenge and reject the very codes by which other citizens abide, and his actions, words and even the place in which he resides are a testament to his rebellion. Naturally, Moirna in Atwood’s novel is seen as a “loose woman” by the powers that be, because she has rebelled. In much the same manner, V because of his rebellion is labeled a terrorist, and an outlaw.

Thus both the suggestion of rebellion and the consequences of it in the selected quote can be greatly applied to what happens in V for Vendetta. V not only defies the system, he goes several steps ahead and seeks to actively disrupt it. He does this in a systematic and ingenious manner, and while extracting his vendetta on the specific individuals who were responsible for the horrors of Larkhill, he also works against Norsefire and the forces of fascism as a whole.

V is a symbol for anarchy and freedom: he is the polar opposite of everything the dystopian world presented in V for Vendetta stands for. The irony is that both Moira and V are “good” human beings in their own right: Moira is a feminist and fiercely devoted to her values, V is learned, knowledgeable and even sensitive even though he is capable of killing ruthlessly. However, because of his defiance, V is labeled in the public eye by the government whose forces he is opposing.

Dystopian Society in V for Vendetta. (2016, Aug 19). Retrieved from https://studymoose.com/dystopian-society-in-v-for-vendetta-essay 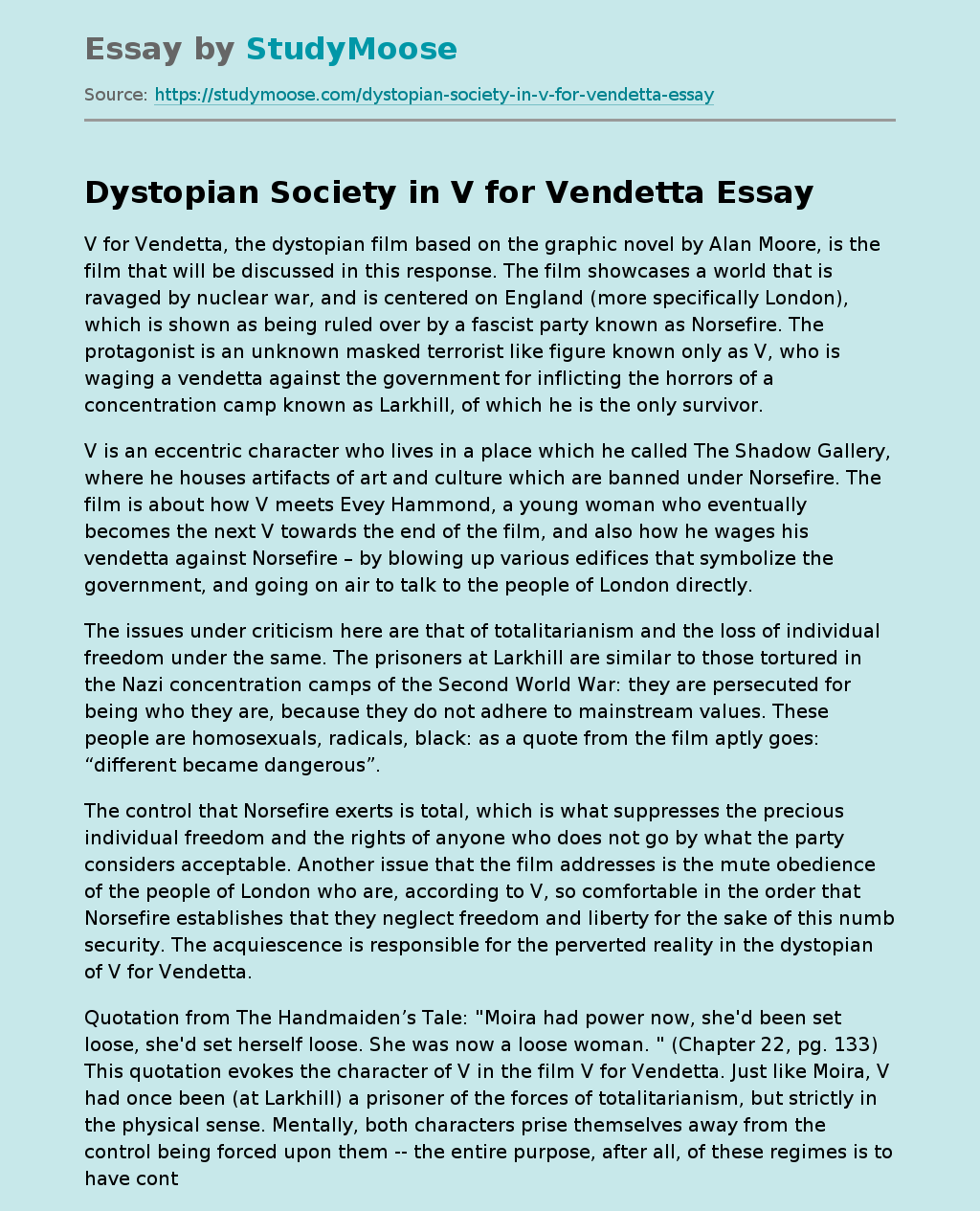