In the movie V for Vendetta, the character Evey Hammond undergoes a drastic change in character throughout the film. In the film she transforms from an innocent citizen of a corrupt government to a rebellious assistant of “V”. Her character plays a huge roll on V’s character change as well.

During the beginning of the movie Evey is shown as an innocent woman disgusted with the topics being discussed on her TV. Evey does not speak about her views because her superiors and peers could punish her.

Turn in your highest-quality paper
Get a qualified writer to help you with
“ V for Vendetta Character Analysis ”
Get high-quality paper
NEW! AI matching with writer

This is important because that is how all of the citizens in that county feel towards their government.

Evey’s fear-based lifestyle is influenced by the conditions she lives in. She also has a depressed persona to her. She believes that she is not a strong enough person to stand up for what she believes in. She tells V that she thinks she isn’t as brave as her parents, and therefore can’t fight back against the government like they did.

She says: “I wish I wasn’t afraid all of the time, but I am.” Evey assumes that the conditions she lives under are stable so she doesn’t think that they are going to get any better.

For the most part she behaves obediently, although she does show some signs of thinking for herself. She decides to help V by macing the detective who is pointing a gun at him. Evey does this because she believes it was the right thing to do.

Even though she could face serious consequences for that, she does it because there is still something in her that won’t accept what others are telling her. Later on, she regrets her decision: “I shouldn’t have done that,” telling V.

By the end of the movie, V decides that Evey is ready to be set free, but her character has completely changed. Now she believes that she has the choice to disobey those in power. She chooses to stand up for what she believes in. Instead betraying V and her own conscious, she bravely decides to face the firing squad. Seeing this V knows she has adopted a positive view on what he is doing. “Then you have no more fear anymore,” he tells her: “You’re completely free.”

In conclusion, Evey’s character takes a dramatic turn throughout the movie. She goes from being an innocent woman playing by the rules set by her corrupt government to a rebellious companion to an insane extremist fighting against the law to bring freedom to the people. I believe that Evey changes for the better of her wellbeing. 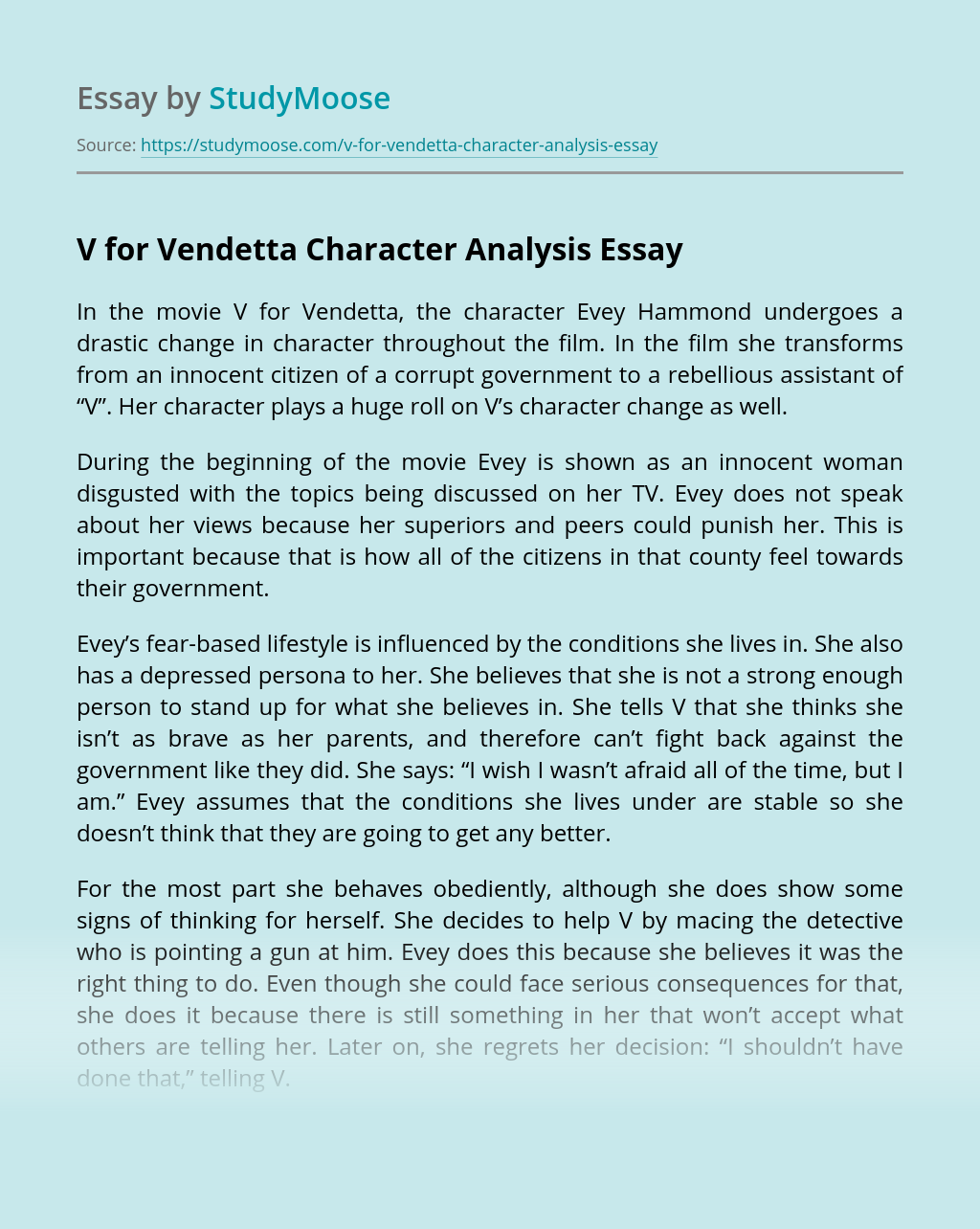 Turn in your highest-quality paper
Get a qualified writer to help you with
“ V for Vendetta Character Analysis ”
Get high-quality paper
Helping students since 2015
Stay Safe, Stay Original