Don't use plagiarized sources.
Get Your Custom Essay on Urbanization: Problems and Solutions Just from $13,9/Page

Sustainable living can be defined as being able to provide for the current generation without compromising the ability of future generations to do the same. As a country develops economically there is a net influx of people moving from rural areas to urban areas, a process known as urbanisation. The scale of this can be shown through the way that the population of those living in urban areas overtook that of those living in rural areas in 2011.

As the population of a place increases problems such as overpopulation and traffic congestion will occur.

Generally however, the issues facing MICs and LICs will differ from those in HICs. For example in MICs there are schemes such as Indonesia’s Transmigration scheme or China’s One Child Policy and the formation of slums in Rio de Janeiro whereas in HICs there are ageing populations such as those in the UK or France. Indonesia’s Transmigration programme involved moving 20 million people from overcrowded islands such as Java to some underpopulated places such as Sumatra. However though the scheme could be seen as a failure as in 1980 it was inhabited by 62% of the country’s population despite only constituting 7% of the country’s landmass. The scheme also caused other problems such as conflicts between the indigenous populations of different islands and those coming from Java, an issue known as Javanization.

This issue however is something only especially relevant to Indonesia as a result of the makeup of its landmass; as a result of being made up of numerous islands there are different cultural identities and often clash with those from Java. This method of planning and management could be said to be specific to Indonesia and ignores the degree of economic development of the country, however it could be said that this issue of overpopulation only occur in MICs or LICs and so is affected by the level of economic development. This contrasts with Rio de Janeiro, where the surplus of residents led to the creation of slums. Ultimately however, there was little government intervention as over 300 of these areas were colonised by drug gangs who acted as the pseudo-government. This is not the case for all slums, for instance Dharavi, which is located next to Mumbai’s financial district and so is a target for government intervention and large scale redevelopment.

This show’s that different governments will manage things in different ways in reaction to their individual situations and individual governments. Generally the issue of slums will not come about in HICs and so it could be said that the degree of economic development is a factor affecting planning and management as a result of different issues arising for different countries. Another issue which varies between different countries of varying levels of economic development is transport. Generally as levels of economic development augment, more and more people are attracted to the agglomeration to work there and so there are more people on the roads. This is notable in places such as Bangkok, Thailand, where the population has grown from around 6 million in 2000 to just under 10 million in 2010.

This has however led to congestion, accidents and poor air quality. In the process of dealing with these issues, Bangkok’s Mass Transit Authority attempted to manage issues through the expansion of the public transport however this stagnated following the military coup of 2006. Nevertheless, this is similar to the management of transport within other MICs such as Curitiba in Brazil and is also similar with HICs such as London. In Curitiba, other schemes such as the Green Exchange where people exchange recyclable waste for bus tickets, encourage the use of the Bus Rapid Transit. In addition to this, the structure of Curitiba’s roads also encourages the use of public transport with the central roads being reserved for buses. This is shown to be effective through Curitiba’s low levels of pollution compared to other parts of Brazil despite being heavily involved in the manufacturing industry.

London has similar schemes such as the Boris Bike and congestion charging schemes, encouraging the reduced use of cars and also the introduction of the Oyster Card, making public transport more convenient. This suggests that the economic development of a country does not necessarily affect the management and planning in urban areas as countries in varying levels of development use similar tactics in managing this issue. Also something that all of these schemes encourage is the conservation of energy and so adds to the sustainability of them. It is also clear that similar to waste, there is a common theme of sustainability running through the plans of a country and so to some degree, the degree of economic development does not affect the planning and management of urban areas. The management of waste is essential for the maintenance of sustainable living and so requires careful planning.

In regards to economic development, there is a correlation with the amount of waste generated; as prosperity increases, more people live there, leading to the consumption of more goods, energy, food and transport, overall leading to the generation of more waste. This is notable in the UK, where London’s financial core has grown it into the 4th largest urban economy in the world and simultaneously it also contains the highest landfill usage in Europe, suggesting that economic development leads to larger quantities of waste and so requires a larger degree of management and planning in order to deal with it. This can be shown through a report in 2010 from Boris Johnson, the mayor of London, which outlines plans to turn London into a zero-waste-to-landfill city by 2025. He aims to increase the level of household recycling and composting rates to 60% by 2031 from 25% in 2010.

Despite these plans for the future, London’s current management of waste could be said to be unsustainable. According to the Local Government Association in July 2010, the country will run out of landfill sites by 2018 unless new ones are found; therefore the UK’s management of waste is unsustainable. However recently as the issue of sustainability has become more prominent, the UK’s management and planning has moved in the direction of sustainability. This contrasts with the waste management of Curitiba, a planned city in a less economically developed country than the UK, which has a recycle rate of 66%. This suggests that as a country becomes more economically developed, the sustainability of its management of waste reduces. In Curitiba there is a ‘Green Exchange’ programme where residents exchange recyclable garbage for food and bus tickets. This allows for 300 tonnes of garbage to be recycled per month.

This can be linked to the way that more economically developed countries produce more waste and so it is much more difficult to manage the waste. In addition to this Curitiba, as a planned city, would of had this method of waste management planned during its conception whereas London has been around for almost two thousand years and so its waste management would not of been planned, so it could be said the situation of a location will affect the planning of waste. When considering that Curitiba is a planned city, something important to remember is that Brazil is run by a central left wing party and so it might be possible to suggest that the views of those in charge will affect how things are done.

However overall all countries generally have sustainability on the agenda which would lead to one to think that the economic development of a country might not necessarily impact its management and planning as they are all aiming for the same thing. Nevertheless the planning and management of an area will more be affected by their circumstances as different issues will require different schemes and each nation will also have different barriers for them to work around. Therefore the economic development of a country will affect the management of issues to a certain extent but moreover the circumstances of the matter have more of an impact on the way things are planned and managed. 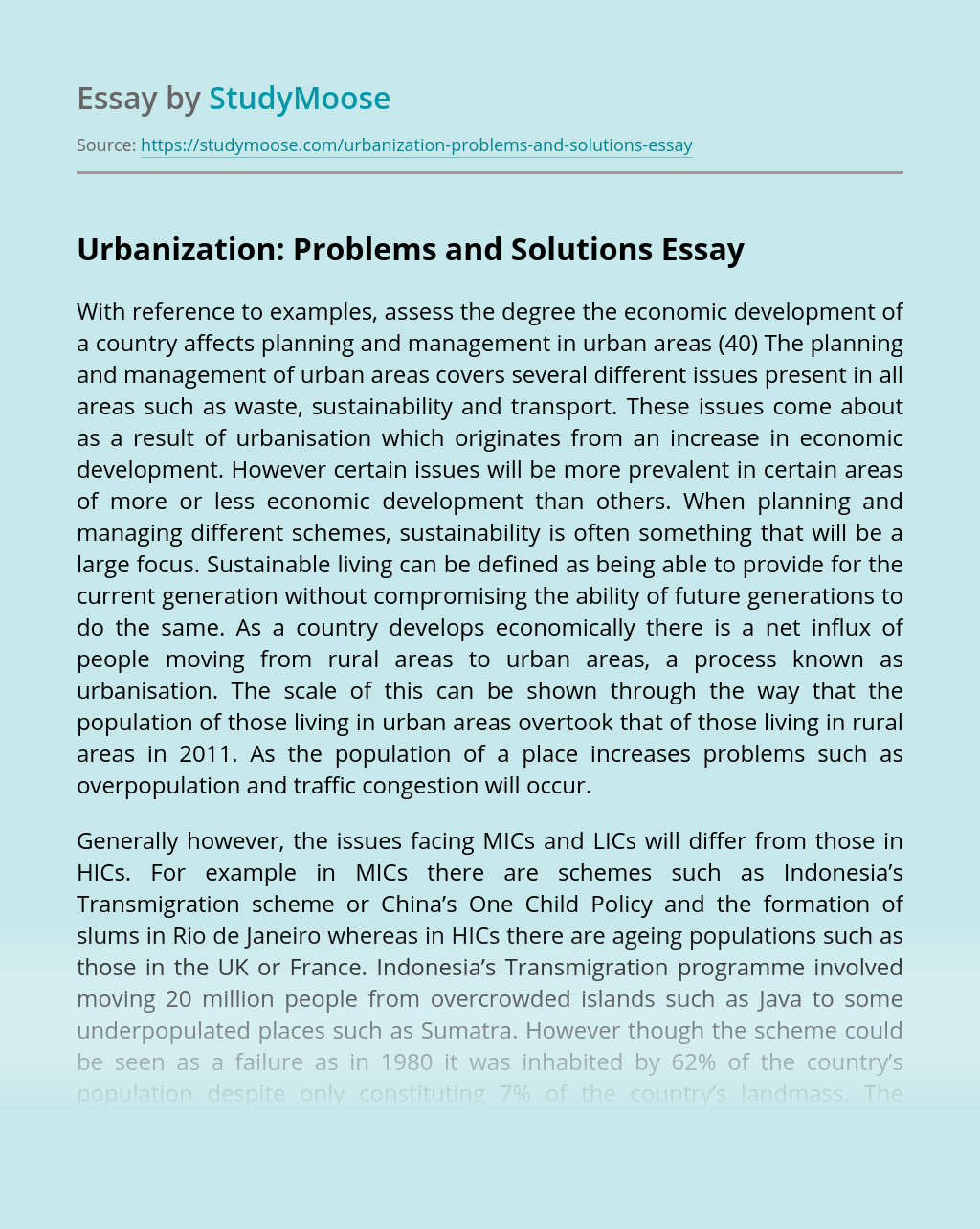 Question No 1: What opportunities and threats did McDonalds face? How did it handle them? What alternative could it have chosen? Answer: OPPORTUNITY: 1. He offered a limited menu of high-quality, moderately-priced food served fast in spotless surroundings. McDonald’s “QSC&V” (quality, service, cleanliness, and value) was a hit. 2. Food is prepared in accordance with...

Neoclassicism is the idea about art and literature that evolved during the 17th and 18th century greatly affected by classical tradition. Changes in culture and consciousness influenced this period. Crucially, the Neoclassical Age, also known as The Age of Reason English Literature, can be classified into The Restoration Age (1660-1700), The Augustan Age or The...