Australia has a high level of urbanisation, which is the increased activity of urban life. This has created many issues in Australian environments. While many people may think this brings economic benefits, ever-expanding populations have brought with them a range of problems for both the physical and built environments. Though some areas of cities are being subjected to urban growth, other areas may be experiencing the effects of urban decline.

Urban growth is the increasing size of a city either in terms of an increase in population or an increase in its extent through the creation of new suburbs.

Don't use plagiarized sources. Get your custom essay on
“ Urban Growth and Decline ”
Get custom paper
NEW! smart matching with writer

This has created many issues and has impacted both the physical and built environment in a number of ways. The natural environment suffers and is replaced as more space is required to build houses and the development of industry to accommodate the ever-increasing population.

Urban decline is where the quality of the built environment declines and when changing land uses, brought about by changing locations of activities within the city, causes activities to move elsewhere.

This results in former factories and warehouse areas becoming abandoned, causing them to fall into a state of disrepair. This movement of factories and workplaces results in unemployment impacting on the population of the area, causing it to decrease therefore introducing decentralisation, urban sprawl and urban decay.

Marrickville is an inner suburb of Sydney and it is south-west of the CBD. It experienced urban decline when factories closed or moved to outer suburbs such as Campbelltown. Increased urban activity leads to increased consumption of possibly finite resources.

The government has initiated strategies and plans for achieving ecologically sustainable development such as encouraging green initiatives including recycling, consumption and water management schemes. All governments and industries, as well as the population, need to reduce the ecological impact of human activities.

Urban growth and decline occurs in every urbanised country on Earth and can lead to geographical processes that cause the physical and built environment to destabilise, such as urban decay and urban sprawl. But with new strategies and a green state of mind, the effects on the environment can be neutralised. With public, industrial and government cooperation, we will be able to combat the effects of urban growth and decline, to ensure that future generations are able to live in an environment that can be ecologically sustainable, as well as contributing to a high quality of life. 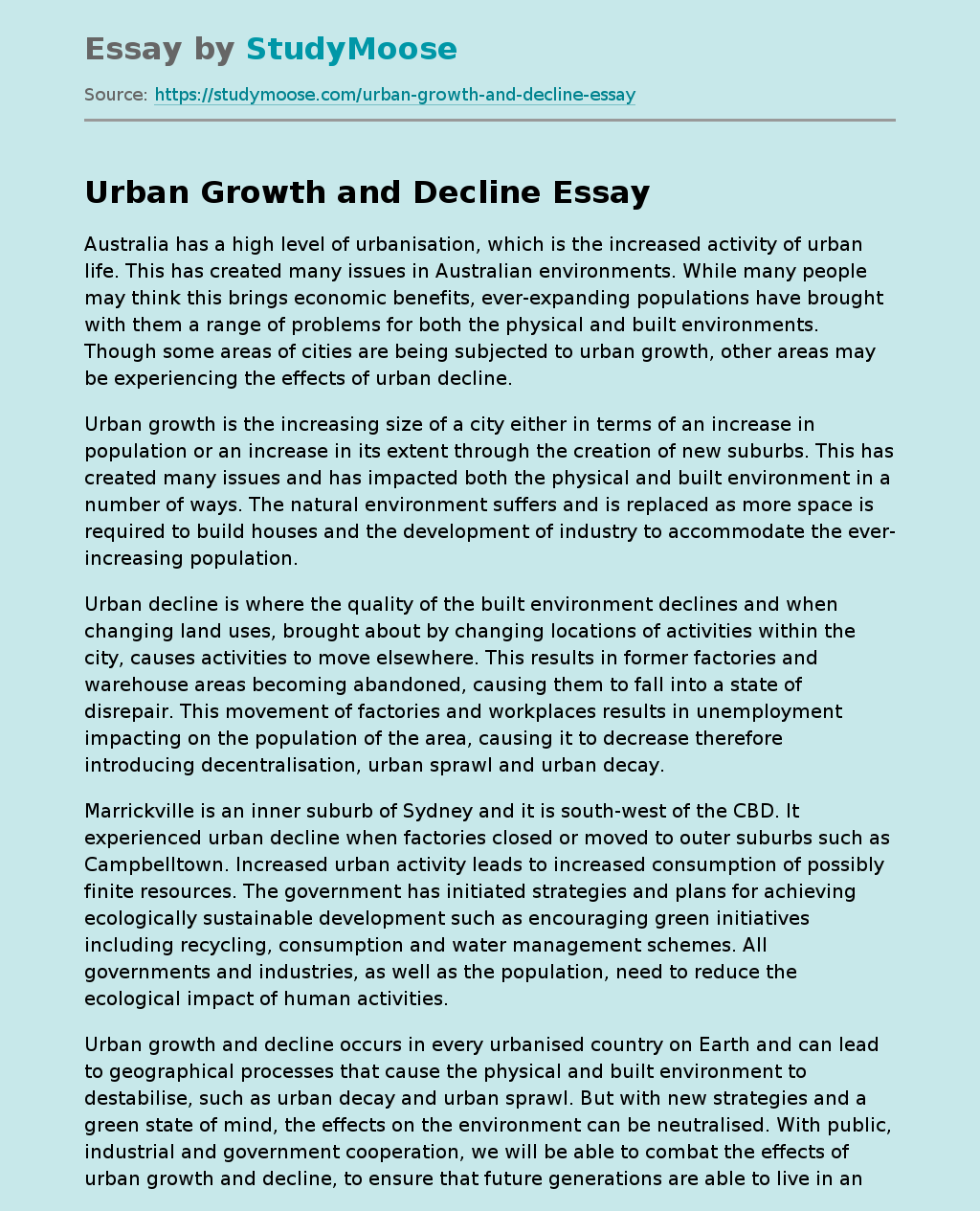