A discussion of Old Major’s ideas of a Utopia in “Animal Farm” by George Orwell.

The definition of Utopia is “no place.” A Utopia is an ideal society in which the social, political, and economic evils afflicting human kind have been wiped out. This is an idea displayed in communist governments. In the novel, Animal Farm, by George Orwell Old Major’s ideas of a Utopia are changed because of Napoleon’s bad leadership. Old Major explains his dreams and ideas to all the animals before he dies.

Don't use plagiarized sources. Get your custom essay on
“ Animal Farm Beasts Of England Song ”
Get custom paper
NEW! smart matching with writer

At his speech all the animals go to hear what Old Major has to say. This happens on the night that Mr. Jones comes home drunk. Old Major explains his ideas to all the animals: Man is the only creature that consumes without producing. He does not give milk, he does not lay eggs, he is too weak to pull the plow, he cannot run fast enough to catch rabbits. Yet he is lord of all the animals.

(p.19) This speech gets all the animals riled up and sends the toughts of getting rid of man. Old Major then teaches them the song the Beasts of England which teaches them the “great” life without man and with no more bad leaders: Beasts of England, beasts of Ireland, Beasts of every land and clime, Hearken to my joyful tidings, Of the golden future time. Soon or late the day is coming, Tyrant Man shall be o’erthrown, And the fruitful fields of England, Shall be trod by beasts alone.

Rings shall vanish from our noses, And the harness from our back, Bit and spur shall rust forever, Cruel whips no more shall crack. Riches more than mind can picture, Wheat and barley, oats and hay, Clover, beans, and mangel-wurzels Shall be ours upon the day…(p.22-23) After the song the animals were even more excited. They sing the song so loud it wakes Mr. Jones up. Mr. Jones starts firing his gun into the darkness. This quickly scatters the animals. Three days later Old Major dies so Snowball and Napoleon take over but Napoleon wants all the power. Snowball does a lot of research and planing but Napoleon wants to take over completely by himself. So Napoleon frames Snowball so he can become the leader. Orwell tells about the meeting to discuss the windmill: By the time he had finished speaking, there was no dought as to which way the vote would go. But just at this moment Napoleon stood up and…uttered a high pitched whimper of a kind no one had ever heard…nine enormous dogs wearing brass studded collars came…they dashed strait for snowball. (P.57) This scene shows Napoleon is a tyrant and wants all the power to himself and that he has been sneaky. Napoleon has trained nine mean attack dogs for his protection and other purposes. This foreshadows some of his later actions. Later Napoleon starts to become a hypocrite and tries to erase old memories and ideas that were not his own when he went against his own rules by going into Mr. Jones house: Nevertheless, some of the animals were disturbed when they heard that the pigs not only took their meals in the kitchen and used the drawing-room as a recreation room, but also slept in beds…Boxer passed it off as usual with “Napoleon is always right!”, But Clover, who thought she remembered a definite ruling against beds, went to the end of the barn and tried to puzzle out the Seven Commandments which were inscribed there. Finding herself unable to read more than individual letters, she fetched Muriel. “Muriel,” she said, “read me the fourth commandment. Does it not say something about never sleeping in a bed?” With some difficulty Muriel spelt it out. “It says, ‘No animal shall sleep in a bed with sheets,'” she announced finally.(p.69) Clover did not remember the fourth commandment saying anything about sheets. The pigs were also seen eating in a kitchen and playing in the drawing-room, even though Napoleon was against all of this in the beginning he became a big part of these activities. From this scene some animals are starting to notice their “Equal and Perfect” world is becoming not so equal any more. As the years pass by there are more incidents that prove, Napoleon wants to have more power. Also the “Utopia” idea is going away. Napoleon uses Snowball to blame for all his problems. When the windmill is first destroyed he explains: Comrades,…Do you know who is responsible for this? Do you know who has come in the night and overthrown our windmill? Snowball!! (p.72) Napoleon says this when in reality the storm knocked the thin walls down. Also after this scene Napoleon takes more rations when food is low. Napoleon starts to drink alcohol and wear clothes near the end. This gets the other animals mad but very confused: It was a pig walking on his hind legs. Yes, it was Squealer. A little awkwardly, as though not quite used to supporting his considerable bulk in that position, but with perfect balance,…out came Napoleon himself, majestically upright,…He carried a whip in his trotter,…all the sheep burst out into a tremendous bleating of- “Four legs good, two legs better!” “Four legs good, two legs better!” “Four legs good, two legs better!” It went on for five minutes without stopping…Benjamin felt a nose nuzzling at his shoulder. He looked round. It was clover… “My sight is failing,” she said… For once Benjamin consented to break his rule, and he read out to her what was written on the wall. There was nothing there now except a single Commandment. It ran: All animals are equal. But some animals are more equal than others. After all of this confusing the animals are very confused. They just go along with the scenario but some do not approve. The animals start to see there “perfect” world disappear. Orwell shows Old Major ideas of a Utopia vanish by having Napoleon emerge as a tyrant leader and shows that he is power hungry from the start. Throughout the story Napoleon starts to change his own regulations so he and the other pigs can have more comfort. The animals are extremely confused because Muriel is the only one who can read, so know one can remember the original Commandments. Napoleon like any tyrant blames his problems on everyone else and in the end ruins the animal’s ideas of a perfect world completely. This story teaches people there is no perfect world and somebody always wants more. 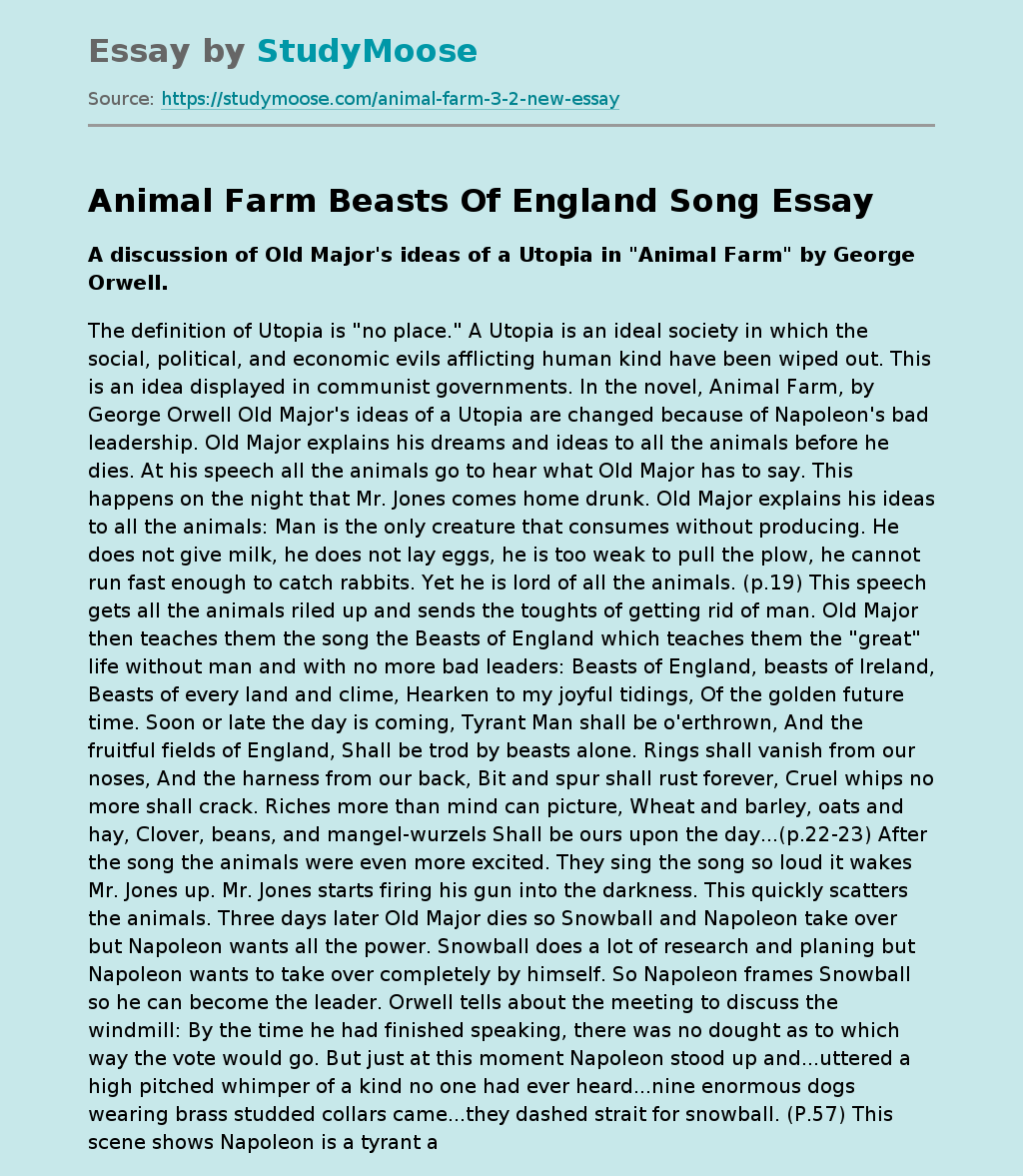