“The Decline of Neatness” by Norman Cousins

In the essay “The Decline of Neatness”, Norman Cousins states that in this generation, the new fad is to been messy and sloppy as if it were “cool” to be fashionably dirty. In fact he refers to it as the “Unkempt Generation”. With this essay, he opens the readers’ eyes to show that the new fad is affecting more ways that anyone could think. Cousins states that he notices that “the more faded and seemingly ancient the garment, the higher the cost” which shows us that the clothing corporations seem to be taking advantage of this new style and trying to get as much money out of the generation as possible.

Don't use plagiarized sources. Get your custom essay on
“ “The Decline of Neatness” by Norman Cousins ”
Get custom paper
NEW! smart matching with writer

The author also compares the clothing styles to the way kids are speaking these days. Along with pants, the vocabulary is disintegrating. Cousins tells that it’s getting harder to communicate between people because of the carelessness. The generation looks, acts, and speaks as if they are all struggling in this world.

He also expresses that language is getting violent, “almost as casual as the possession of handguns”. Cousins feels as if the sloppiness in the lives of this generation adds to the fact that they are too casual with human hurt. These young folks are becoming numb to the frailty of humans and acting as though brutality is normal.

Not only that but he reveals to the readers that this also “deadens feelings and annihilates privacy”. There is no privacy of sex anymore, like it never existed because of the way they are being brought up.

You can’t fix a problem that no one knows was ever there. Norman Cousins purpose of this essay was not to bad mouth the generation but to open the eyes of readers so they understand what is going on around them. He hopes that the corporate world as well as the media will bring the glamour back into dressing nicely and treating emotions with the respect they deserve. Hoping that this will bring back the morality people once had.

“The Decline of Neatness” by Norman Cousins. (2016, Jul 11). Retrieved from https://studymoose.com/the-decline-of-neatness-by-norman-cousins-essay 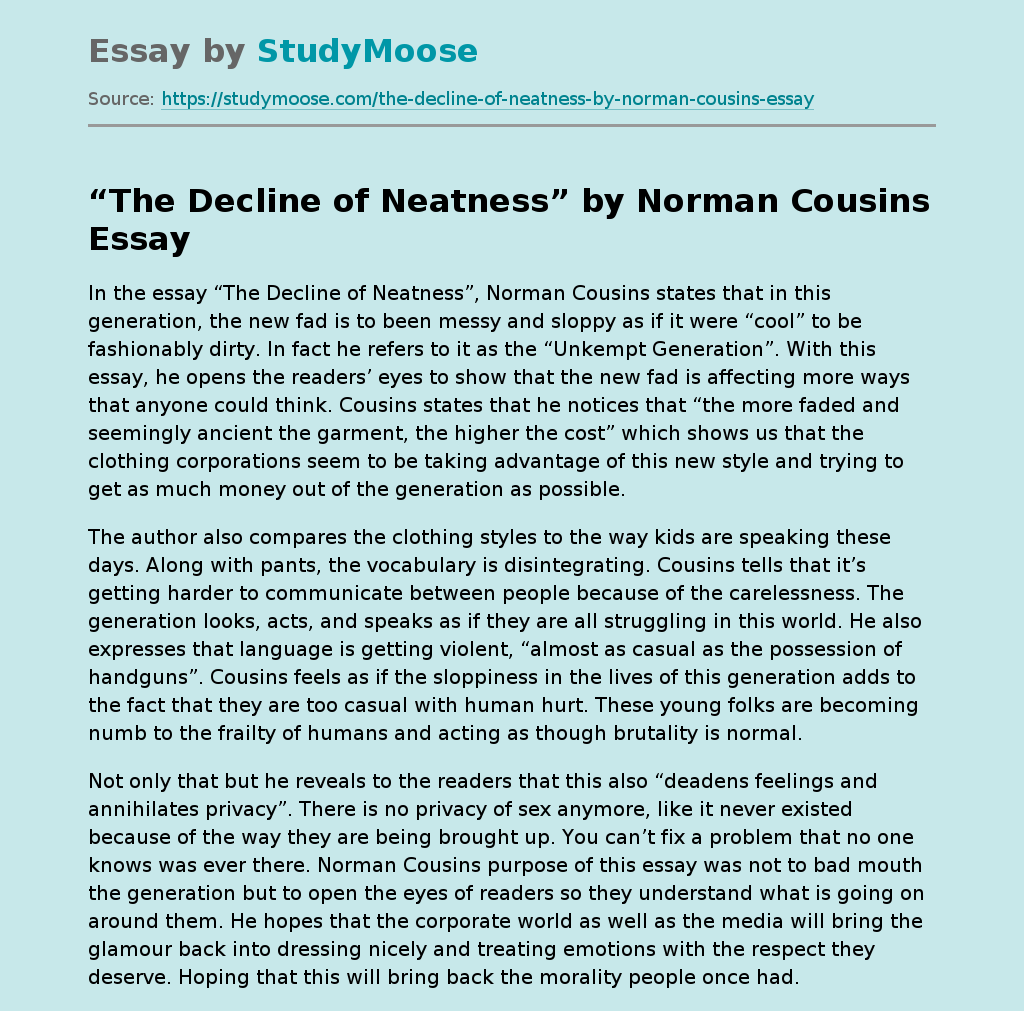