“Rising five” by Norman Nicholson is a poem based on humans and youths in general regarding how they are always looking towards and focusing on the future rather than the present tense perspective. The poets concerns are people not living the present and the poet has been able to convey this through the use of metaphors, presenting imageries and symbols, using alliteration and emphasize for certain ideas and through the comparison of man and nature.

The first stanza of the poem presents a conversation between the narrator and a young boy who is about to turn five years old.

Don't use plagiarized sources.
Get Your Custom Essay on “Rising Five” by Norman Nicholson poem Just from $13,9/Page

The child is desperate to sound older, “I’m rising five,” “Not four,” he said. The poet in this case presents a tensional on the negative part, “Not four,” to reinforce the idea, the poet presents a metaphor, ‘brimful of eyes to stare.’ The metaphor has been used to create an image of wide eyes on the child, thus emphasizing the child’s eagerness and desperation for the next stage, when he turns ‘five.

In the last stanza of the poem, the poet presents a metaphor which sets comparison to how people waste their youth lives, “we drop our youth behind us like a boy throwing away his toffee-wrappers.” While the simile shows the careless people take with their youth, the metaphor gives the readers a warning of how people never live their youth but I always eager for the next stage of life, adults. Thus the poet is able to display his concerns through the use of metaphors which gives and presents descriptions of what people are doing with their lives, not seizing the day but looking for the next.

To display his concerns of life, in addition to the use of metaphors the poet has used regular emphasis for his primary theme, which is people looking towards and focusing on the future rather than the present. The desperate child at the start says, “Not four,” “But rising five” on the clarification of his age. By dropping the lines the poet has been able to apply and emphasize his main message that he wants to get across, a boy who is looking into the next stage rather than the present. The poet has written his poem in a free verse/vers libre, there is no rhythm or rhyme to the poem. This has been applied by the poet as an emphasis to the main idea, because by setting no rhythm to the poem the poet is able to emphasize how people are always rushing to and focusing on the next stage of life rather than enjoying and seizing their presents. Thus through emphasis the poet is able to show his main concern and present ideas forward, for example seizing each day.

Often through out the poem the poet has used symbols and through the use of symbolism, Nicholson has been able to display his main concern, people living in the future. In the last stanza the narrator says, “We never see the flower, but only the fruit in the flower.” The ‘flower’ has been used as a symbol; in this case it has been used to foreshadow the present and the beauty, which people never get or seize because they are to busy focusing on the future, ‘the fruit in the flower.’ The narrator continues to say that we never look at the fruit too, “But only the rot in the fruit.” The rotten fruit in this case has been used as the symbol of death; it is the last stage of the fruit there fore foreshadowing the last stage of life, death. There for by using symbols, such as in this case using a ‘flower’ and it’s ‘fruit,’ the poet is able to display his main concern by showing and setting comparison on the behavior of humans, always focusing on the future and at the end finding themselves focusing on death.

In the second stanza the poet presents a parallel between the boy and spring; this is an example for the use of linkage between man and nature which the poet has used often to display his concerns. “Season after blossoming, before the forming of the fruit,” however it’s not “May,” “But rising June.” Spring in this case has been used as a comparison to the boy; it is not ‘May,’ ‘but rising June.’ The boy is not ‘four,’ ‘but rising five.’

This reinforces the main idea how people are never anything but are always hoping and wishing to be something in the future, there fore the poet in this case is able to display his main concern of people not seizing life and who they are. Nature is again introduced through the idea of the “New buds push the old leaves from bough.” In this case the poet sends out a message of time, how generations grow and pass on, presenting the awareness of mortality. There fore seize life because time on earth is limited, you grow and pass on, die, do not waste your valuable time by always focusing on the future.

There fore in conclusion the poet has been able to display his main concerns by presenting his ideas with evidence and description to alter the people reading the poem by giving them a message of not wasting life but seizing each day. Through the use of some figurative devices and the poetic technique the poet has been able to reinforce the primary them of people focusing on the future rather than the present. 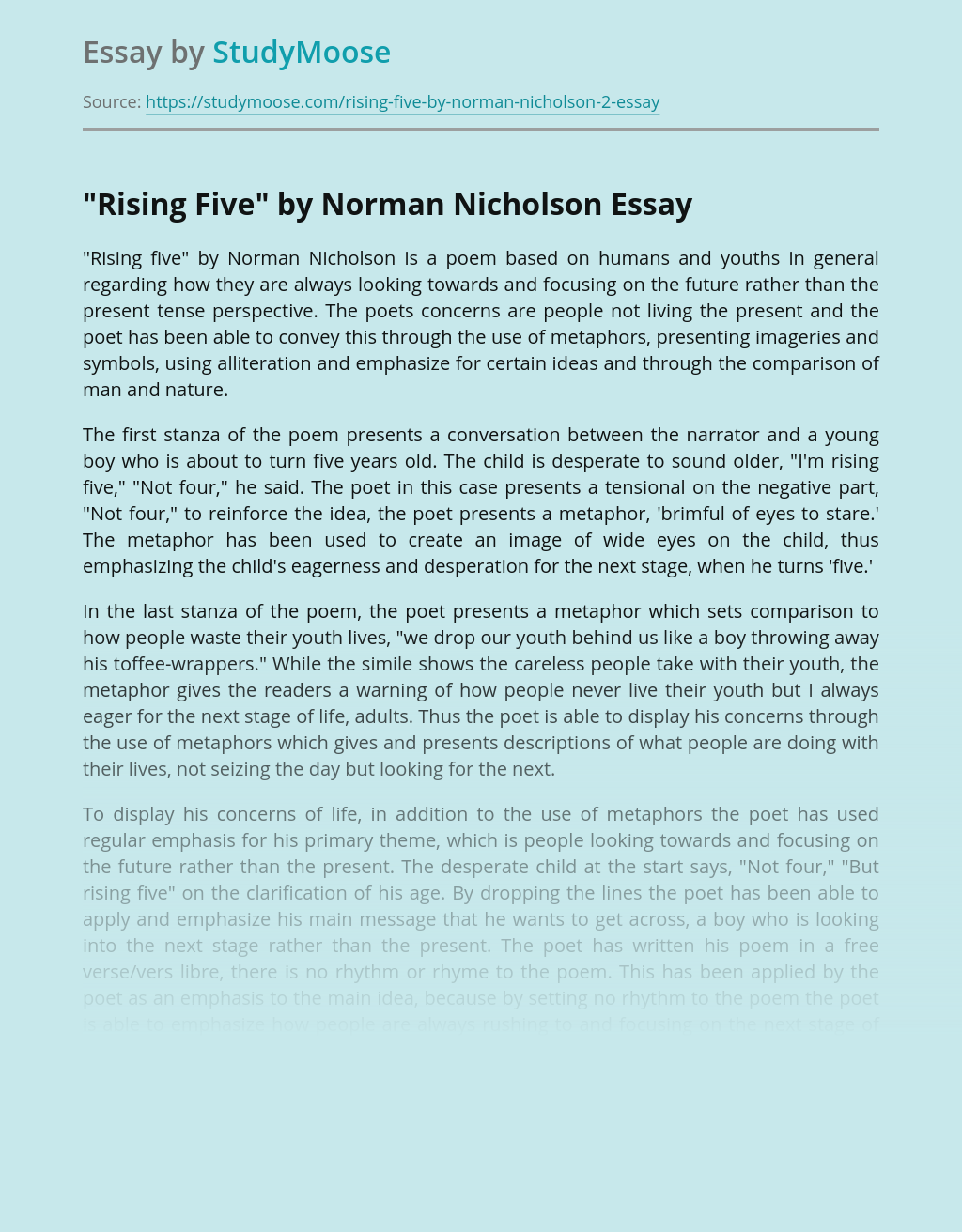 The poetry of Wang Wei and Du Fu

The poetry of Wang Wei and Du Fu celebrate the ancient and bucolic life of these Chinese poets. The ideas and images found in these poems are reminiscent of home and their interconnectedness of their lives with nature. The two poets pull ideas from the natural scenes around them and meld these with the feelings...

The concept of belonging is interesting to me because the idea is really that of ‘self’. There are many varied notions of belonging revolving around the ‘inclusion/exclusion’ of a person in a societal group, ‘attraction/alienation’ to values, attitudes and behaviours, ‘security/marginalisation’. But ultimately the idea of belonging is the development of our own sense of...

This essay will look at the form, structure and content of “The Relic” in an attempt to offer an explanation as to what the poem is about. It will examine the metaphysical poets, and discuss the techniques employed by them to express their views. “The Relic” consists of three 11-line stanzas which incorporate tetrameter (four...

On A Portrait Of A Deaf Man

In this essay I will be studying the various items of poetry from manyAfro-Caribbean poets. One of the poets is Langston Hughes who was born in Joplin, Missouri on the first of February 1902. He started writing poetry after moving to Lincoln, Illinois. The poems I will be studying are “Mulatto” and “I, Too”. The next poet I will...