Some University Policy makers have viewed the increased college tuition fees as a means of dealing with the economic crisis of the early 2000s. The need for universities more resources have also increased. In addition, the facilities needed for technical courses such as engineering are necessary and the institution cannot offer such courses without proper facilities. To be able to finance such facilities, tuition fee must be increased. Education is expensive and is high time we started realizing the real price of education.

Turn in your highest-quality paper
Get a qualified writer to help you with
“ University Tuition Fees ”
Get high-quality paper
NEW! AI matching with writer

Any person who is ready to get good education must be ready to pay for it. That is the truth. However, some also argue that it is not fair for the rate to be equal in all faculties. I agree that the students who major in technical courses should pay more tuition fees than the ones who major in other courses such as social sciences. When the institution locates funds to various faculties some get more than others because of their high budget.

Courses such as environmental are full of field works and trips.

The university must find a good way of solving the discrepancy between the university revenue and expenditures. The colleges in most of the states charge a uniform tuition fee without considering the course difference and their requirements. We need to follow the good example of University of Phoenix that announced last year that they will not raise the University tuition fee. This was a decision reached in the effort to encourage and facilitate higher education for all persons irrespective of his age.

Bill Pepicello, president, University of Phoenix, “For too long, rising tuition rates have presented an unacceptable barrier to higher education at colleges and universities throughout the country” (University of Phoenix). He acknowledged the step taken by the University to freeze tuition fee. He stated “Today, university of Phoenix is taking an important step towards making college a more affordable reality. No student of this university – whether new or existing – will pay increased tuition while earning a degree here, as long as they meet eligibility requirements and remain consistently enrolled.

It’s the right thing to do” (University of Phoenix). Most Adult students hate the criteria used to design how tuition fees are charged by the University. One could apply for a degree Bachelor of Biomedical science but was denied a chance. Later, they decide to take a course in social sciences. The problem arose when he was charged the same fee just like they charge people taking technical courses. This was not fair at all. Adult students do not enjoy using most of the facilities as much as the rest in some faculties.

They only operate in lecture halls and library while some of colleagues use laboratory equipments, travel for field works and other practical activities that use a lot of money. It would be more preferable if the tuition fees were to be charged according to each course a student is taking, the facilities being used. Some would ask,” Are we paying for others to enjoy some facilities on our behalf? As an adult student, some special consideration should be given to us. We have children and we also take them to school.

All that is money being spent but education is for all and therefore it should aim at accommodating all of us irrespective of age. I would be happy if the policy is implemented. ” Another group of adult students, however, feels that the costs of a product and in this case, education, may have a bearing on the quality of education being dispensed in an institution. Thus, they would not mind the cost of tuition fees being high. They too have children and as such, they have experienced the pain they have gone through in getting them education, even in lower levels and realize that it is the quality that actually matters.

University Students on the other hand, argue that although the University tuition fee is relatively high in the Universities, the idea of charging the fee in relation to one course would not preferable. They view this as a discrimination of the highest order. The argument is that they have a different course interest, but university education if education regardless. It is individual interest that leads different students to do different courses at the end of the day. No course is superior to the other and no course without job opportunity after completion.

So all of us should just be treated equally and the uniform tuition fee be charged. If one takes a technical course for instance and his colleague takes a social course. It is not anyone’s decision including the University administration to deny him the opportunity to use these facilities, but rather it is a course requirement. Those in the technical faculties also do not brag about the situation, and if anything they go under a lot of pressure from a lot of work. As they rightly should, students also differ on this subject.

The major reason for this is that they also feel and empathize with their parents when their fee structure reads an item like laboratory equipment and field trips charges while they are taking a, say, business course, which confines them to the lecture rooms and library. The most a student should be made to pay for is sports equipment and library whether or not they use these facilities. This is because they should use them and they are not course specific. “High University tuition fee has denied my son an opportunity of higher education. The current fee does not promote education at all.

University tuition should be reduced much lower to encourage learning. ” These are the views of a parent who is vehemently opposed to the high fees. It is arguable that they not only affect children who have completed the secondary school but also those in primary schools as well. This is because a child who sees his elder sibling at home because of the unaffordable University fee feels discouraged from continuing with education at his level. It is the elder people who act as role model to young ones. Some parents are on the other side of the fence.

Basically, some are okay with the prices for the same reason the adult students are, that is, the fees are reflective of the quality of education. However, some support the prices as to them it shows and separates the classes. The person taking engineering cannot be compared to the person taking another science, who, in turn, cannot be compared to someone taking a business course, then a social source, and so on. They required different qualifications to join the courses and the status must be maintained for the divide to be kept. Tuition increase cannot happen without any proper reason why it is happening.

The question of whether to increase tuition fee or not should become last after every other thing that cause that increase to effect has been solved. As the administrator of Carolina University, the increased University fee that comprises of tuition, room, fees, board, supplies and books, travel, health insurance, and a personal expenditure allowance helps us manage the institution in a way that makes it meaningful to students. The tuition fee we charge helps in acquiring some important facilities and resources that enable us provide education of value.

Tuition increase has also helped us pay the academic officials good salaries with this economic crisis. The idea of reducing the tuition fee at this particular time of economic problems is not logical and I do not think the University institution is to blame for this. However, some also argue that they take care of the needy students in the campus. There is acknowledgement of the fact that all students are not equal financially and therefore use part of this money to pay for the needy students a portion of their fee. They are sure to scrutinize the applications and use the set criteria in deciding on those who qualifies.

It is every university’s commitment to provide quality education and that includes the needy people. If institutions decide to charge the fees in relation to courses people take in the campus, they would not be able to run their projects as required. The majority of people interested in technical faculties will feel discouraged. Doing that would mean that either the tuition fees for the technical courses are increased or reduce the tuition fees for the other courses which do not require more resources. However, some of them will be discouraged and feel discriminated.

A few people will manage to take expensive courses while cheap ones are available. I therefore prefer a uniform rate of University tuition fee (Ehrenberg). It will not be economical enough for the universities to in any way attempt to reduce the University tuition fee without any help from the government. Considering the situation now, the economy of the country is weakened that extra funds from the government to boost Universities is no possible. It is the weakened economy that has forced the government to drastically cut off some higher education funding.

This has led to most of the Universities to increase the tuition fee. However, the idea of inequality in terms of the tuition fee across different faculties will depend on how the University administration engages students to find the way forward. The solution lies with the Universities themselves and it is high time they realized that they should initiate economic projects that would help them adequately run the institution without putting the burden on students and relying on government (Ehrenberg).

In conclusion, it is of no doubt that the increased University tuition fee has denied many people the right to high education. Although some universities have taken a bold and sympathetic step to stop the increase of fees and to help the needy students, most people are still locked out. The University management argues that there is a strong and relevant reason for the tuition fee increase. On the other hand, all students including adults find the current rate unaffordable with the bad economic situation. However, there is an antagonistic argument between the students in the technical facilities and those in social sciences.

Social sciences students feel that the fee is not fair to them because they do not use as much university resources as compared to students in technical and science faculties. However, their colleagues feel otherwise. I therefore have a feeling that the University administrations should bring all parties together with the educational experts to find a better solution putting all factors into consideration. Works cited Ehrenberg, Ronald G. Tuition Rising: Why College Costs So Much, With a new preface. London: Harvard University Press, 2009. Queen’s University Acts to Deregulate Undergraduate tuition. CAUT Bulletin 49. 1 (2002): A5. 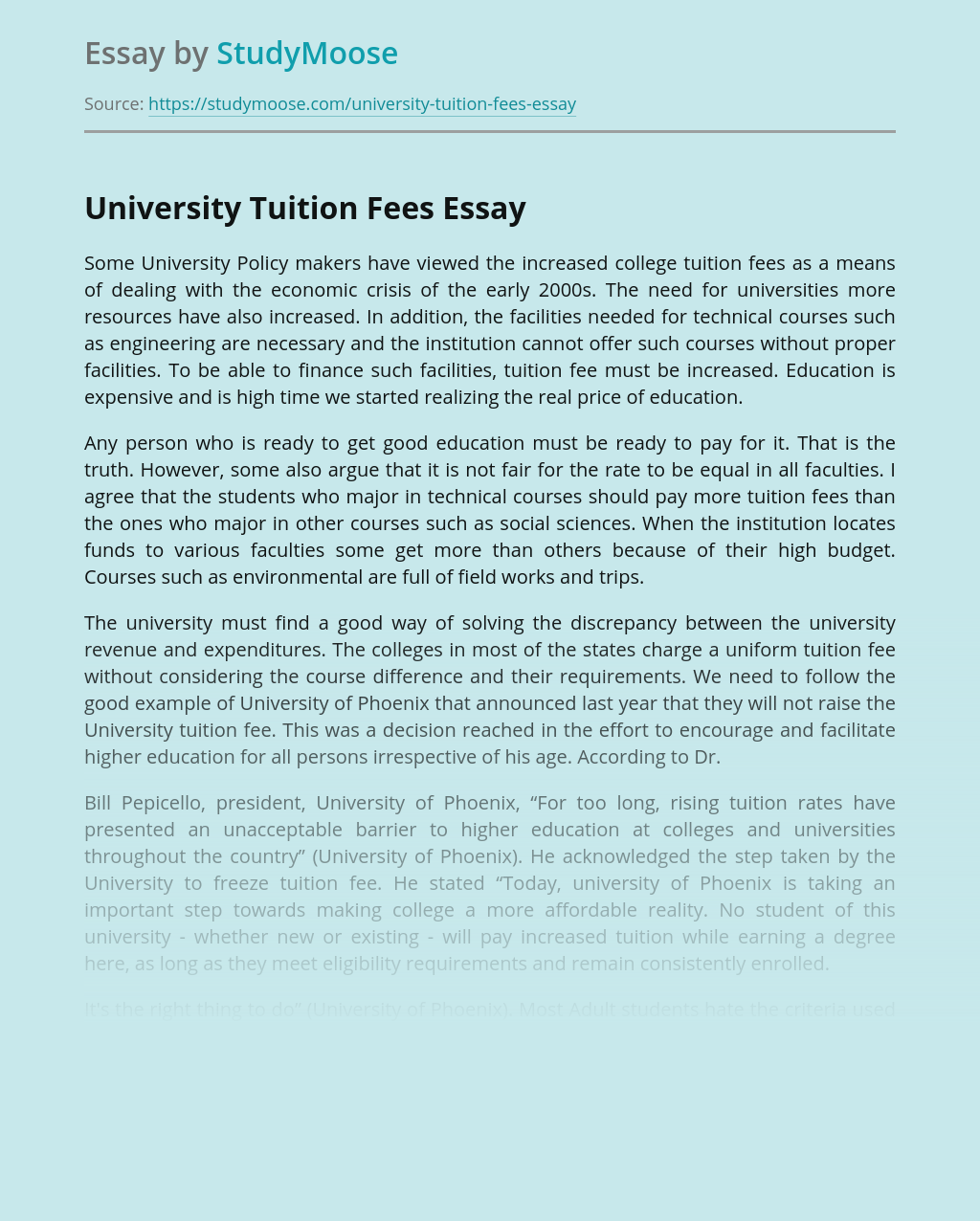 Turn in your highest-quality paper
Get a qualified writer to help you with
“ University Tuition Fees ”
Get high-quality paper
Helping students since 2015
Stay Safe, Stay Original