Should University Education Be Free of Charge?

Education is a way to understand the real world better and whether this education should be provided to university students freely or not is one of the most debated topics over the last decades. It is a topical issue, which is discussed all over the world. Nowadays, people need education in order to survive in this fast-growing civilization. Everyone understands the value of education and on that account the competition to get into the most approved universities is very fierce. University education should not be free of charge, but these fees should not be as astronomically high as they are in so many countries.

Don't use plagiarized sources. Get your custom essay on
“ Should University Education Be Free of Charge? ”
Get custom paper
NEW! smart matching with writer

The situation is different in America, in Great Britain and Slovakia and it can be effective to compare these 3 distinct countries.

There are many universities in the world, both state and private ones, which offer a variety of study fields. Let us imagine that all of these universities were free of charge. This way everyone would apply for them and after successfully finishing their studies, they would start to seek for a job.

The source of the problem would be that there would be too many graduates to begin with. There would be a lot of teachers, architects, lawyers etc., who would not find a place to work. It would lead to a rise of the unemployment and lastly to the downfall of the economy.

This picture is not so far away from reality, because even now (with charged university fees) there is a huge number of unemployment caused partially by the fact that people are not able to work in their field of study.

Another problem may appear because of the quickly rising amount of university fees. There are young people from poor families who are clever and want to continue their studies at universities. The family struggles to pay the fees, asks for several loans from the bank which brings another set of problems: how to pay them back? On the other hand, this way the students would value their position in colleges because of the knowledge, that if they fail, all that effort and money would be a waste.

In the US students have been aware for a long time that going to university is not their right but rather a costly investment which can eat up a lot or all of their families’ savings. Americans typically pay $45,000 for a 4-year tuition unlike in private universities where the fees can reach $88,000. In Slovakia the situation is different. After graduation every student has the right to apply to university while the state will provide 3+2 years of free education (it includes only state universities with full time studies and not the private ones). At private universities students have to pay tuition fees from €400 up to €2,000.

After seeing these data some would be deterred to apply to universities. In Slovakia the situation is milder, because not everyone must pay tuition fees. However, for those, who have already finished a university or dropped out after 1 or 2 years, the government will not provide further money and they must pay the fees themselves. I, personally, belong to this category. I attended another university for 2 years and only later applied for the Faculty of Education. After my first year a letter came informing me about my duty to pay €500 for 2 semesters.

This year the education fee has increased to €600. I consider myself lucky for having parents who enable me to attend university by paying a huge part of the tuition fee with only little participation from my side. It should be taken into consideration that there are less fortunate people who want to achieve something in life – to which the answer is education- but they don’t have the means for it.

_Tuition fees 2012: what are the universities charging?_ www.guardian.co.uk/news/datablog/2011/mar/25/higher-education-universityfunding

Brzezinski, P. (2010) _Compared to their American peers, British students have nothing to complain about_ www.blogs.telegraph.co.uk/news/piotrbrzezinski/100067493/high-earners-would-avoid-a-graduate-tax-by-working-abroad-the-tuition-fee-rise-is-the-only-way-to-avoid-a-brain-drain/ (Access date 24 Nov. 2012)

Should University Education Be Free of Charge?. (2016, Aug 12). Retrieved from https://studymoose.com/should-university-education-be-free-of-charge-essay 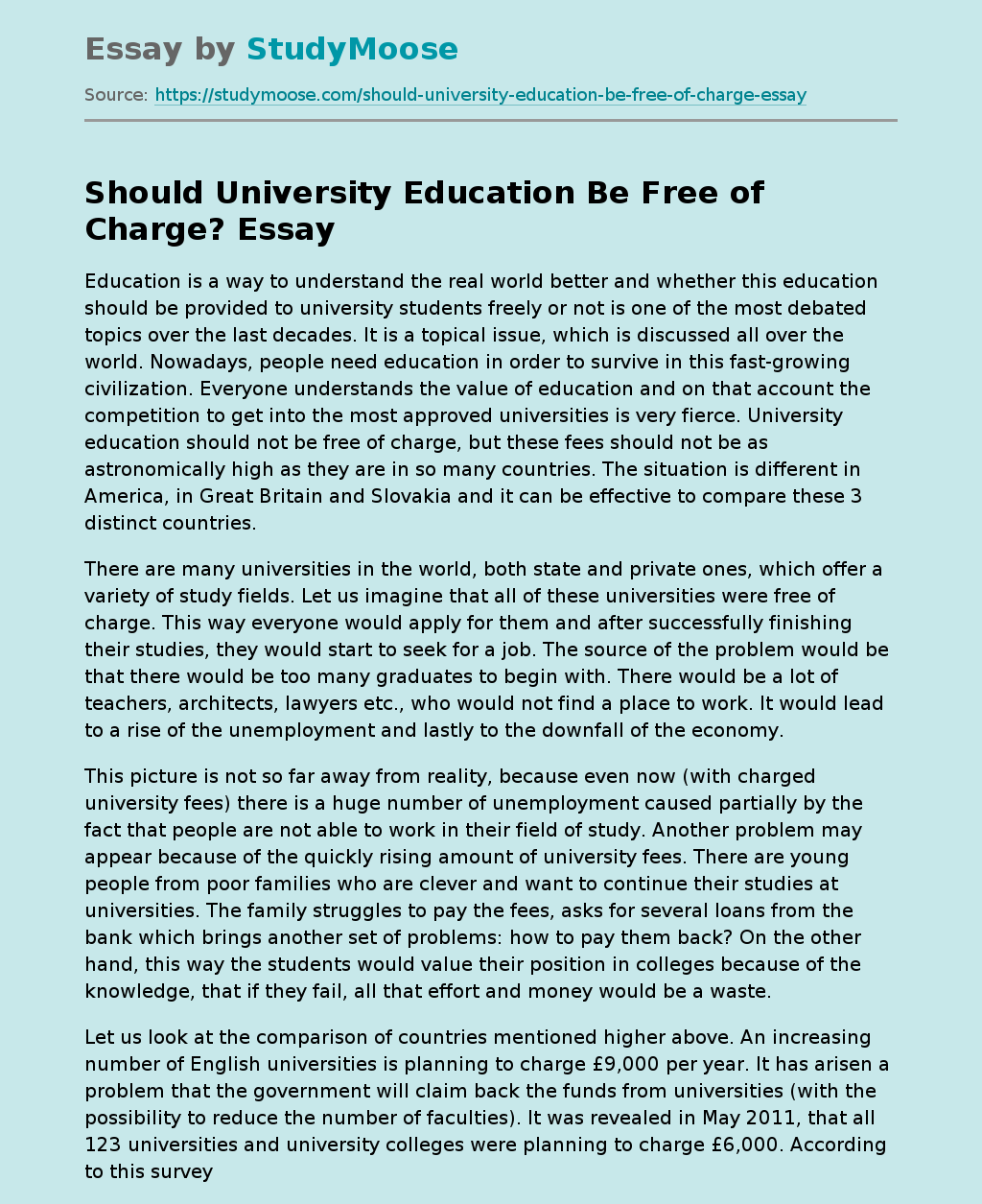