Though I am from Francisco, my home country is Philippines, which I decided to visit on Oct, 2007 since I had not been there for fifteen years. On my way to my home from the airport, I took notice of a big mall which had been constructed in my absence and this prompted me to list it as one of the vacation route destination. On that fateful day, my friend accompanied me to the mall, where we watched a movie, did some shopping and had great food in a restaurant.

Don't use plagiarized sources. Get your custom essay on
“ Unforgettable: Shopping Mall and Great Food ”
Get custom paper
NEW! smart matching with writer

We had lots of fun strolling along the alley when a sudden and deafening explosion occurred resulting to chaos and disarray. The building was smoky, dusty and filled with debris all over and hence, it took us quite some time to get out. Everything was invisible due to the debris, smoke and dust, and the experience was extremely frightening considering the fact that my friend and I were located approximately 200 feet from the blast.

The deafening sound of the blast pierced through our ears and to make matters worse, we could barely figure our way out of the building.

My friend and I were not very acquainted to the mall since I had never visited it and my friend had only visited the place twice. It was the firemen who came to our rescue and immediately got us out of the building so that they could save our precious lives. Though we never sustained serious injuries, the experience was really traumatic for me.

We sustained minor bruises on our legs and arms, which did not necessitate hospitalization. Moreover, foreign materials got into our eyes and they were removed in the hospital.

We were released after being treated for the minor injuries that we sustained. The experience was so traumatic that I resorted to avoiding crowded places and malls for a whole year. I had the fear of visiting such places because I thought a similar incident would happen again. It was really challenging to get of the trauma despite numerous efforts by different psychologists. Their attempts to make me understand that that was just an accident that would not occur again proved unyielding.

This is because the incident kept recurring in my mind and on several occasions I had nightmares about it. There were some people who died out of the explosion and the thought of escaping death by a whisker frightened me. However, after a year, I got over the trauma though I still lacked the urge and desire to visit the mall again. It was clear that the experience was not something that could be forgotten that easily. It was a life-changing and exceptional experience that stuck on my mind for a very long period of time.

In December, 2009, I visited my country again and on my way home I saw the mall though I did not list it as one of the places to visit in the course of my vocation. I instead decided to spend my vocation with relatives and friends because they really meant a lot to me. I also had fun by visiting various resorts and beaches. It did not occur to me at any given point of time to visit the mall. I still avoided it as though it was a plague. This shows the extent to which the experience was unforgettable and traumatizing. 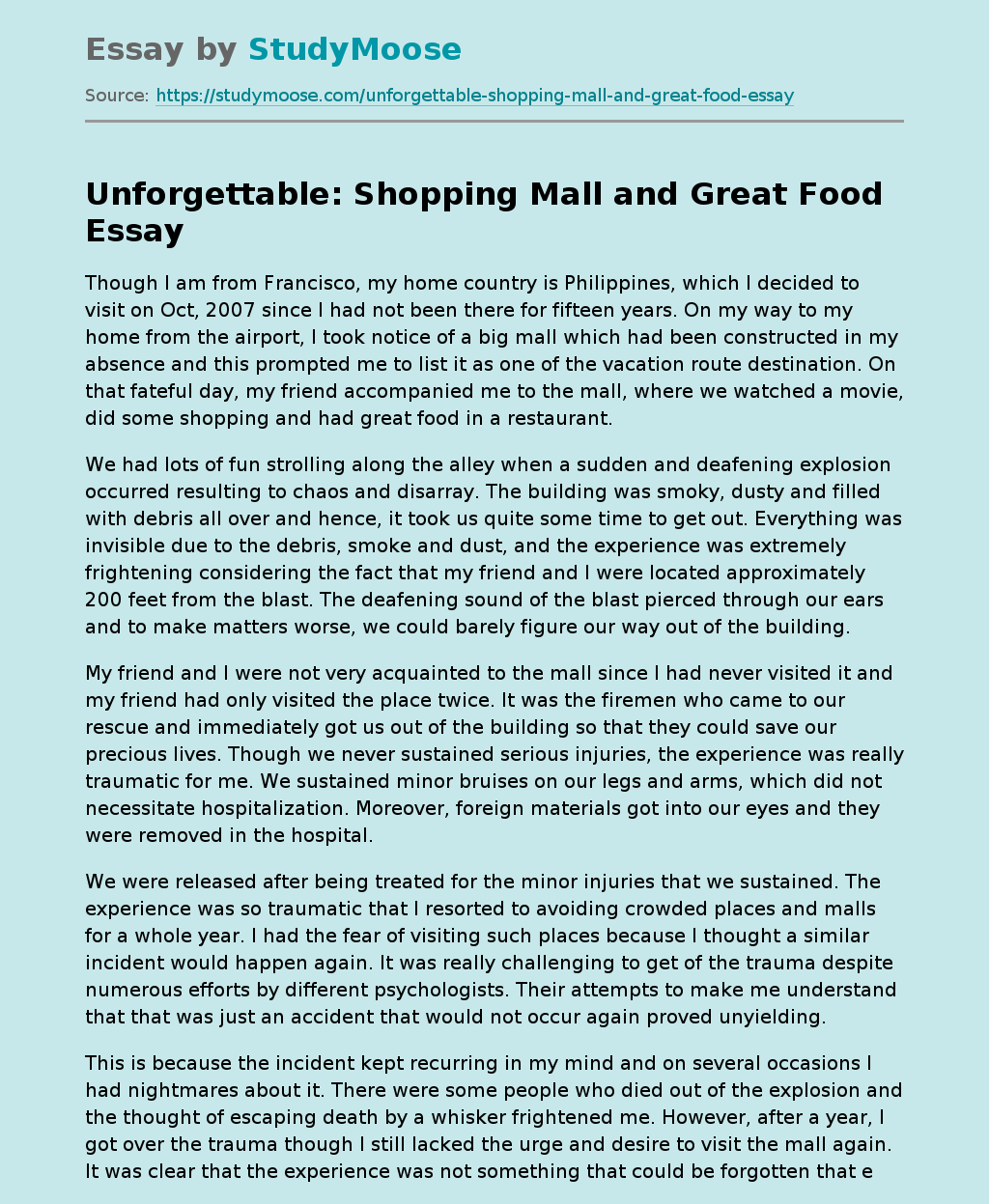