This paper tends to seek and analyze the character of a certain story into which Uncle Tom’s Cabin is the story chosen. The aim of this paper is to choose one of this story’s characters and discuss him/her as a subject to Bildungsroman. In order to understand this paper, Bildungsroman is said to be a kind of novel or a novel with a youthful character who depicts his growth turning into a matured one. This serves as a book report; character analysis regarding a certain character of a story depicted as a Bildungsroman and narrate his or he dramatically narration of maturing development.

Don't use plagiarized sources. Get your custom essay on
“ Uncle Tom’s Cabin ”
Get custom paper
NEW! smart matching with writer

Bildungsroman Depicted by Tom Tom is the protagonist who depicts a Bildungsroman narration in the story Uncle Tom’s Cabin. This is depicted through his maturity growth from being just a slave, thinking like a slave through his development to his belief to Christianity and Christ. Onwards to Tom’s continuous journey in life, he became a devotee as well as a person whom others relied on.

At the end of the story, Tom died but his maturity towards love of God and faith touched the life of all those people around him.

His life is dramatically narrated as full of fleshly pains brought by the cruelty of his last master but still Tom struggled for his faith and held on to it until his very last breathe. At the end, he became a role model of goodness and faith conviction. Uncle Tom’s Cabin Tom as the main character in the story of Uncle Tom’s Cabin is said to be a slave; literally, and by heart, he has no other intention of being something else but is contented with what he is until the day that other slave buyers tended to purchase him from his owner.

This is where his maturity development turns in; from his travel from his former owner, the Shelby; to his purchaser, Mr. Haley (Stowe). Uncle Tom was forced to leave his family and was taken by Mr. Haley into the slave market. This is where he gets to meet a little girl whom he became fond of and eventually became his dearest friend. The incident when Eva accidentally fell to the river was the start when Tom became a part of the St. Clare family, basically for saving the daughter (Stowe).

On and on eventually, Tom is not required to work harder on the household but became a seemingly partner or a devotee of Christianity together with Eva. Tom’s life made another change when the little girl Eva became ill and eventually died. People around the St. Clare family changed and decided to let Tom alone for his freedom. Radically, St. Claire died and Tom was sold to a plantation owner named Legree (Stowe). The new owner of Tom is said to be cruel and evil, he tends to buy slaves and pick one to be his sex slave.

Tom was punished by his evil owner once he did not comply with Legree’s order which is to whip one of the slaves (Stowe). Because of the said action of Tom in which he disobeyed to the command of his owner, he was being beaten up so hard; Legree intended Tom to lose his faith on God by simply making him suffer from the pain that the beating that has done to the latter (Stowe). After he was beaten up, he gets to meet the former sex slave of his owner where he noticed that the lady was being separated from her daughter. Cassy’s child was taken away from her due to slavery (Stowe).

After some time, Tom was changed after the Quakers healed him. In the place of Louisiana, Tom’s beliefs on his faith almost fade away, but still, he counted on and held on to his faith in which he has two different views of (Stowe). Toms Faith is determined by two important inspirations; first is an inspiration of Christ and the second one is an inspiration of Eva. These two said inspirations are the ones who made him courageously and fearless of his experienced torment over the hands of his Evil master Legree (Stowe).

Uncle Tom is the one who eventually encouraged Cassy to seek for her freedom and the latter did obey his suggestion and took Emmeline with her. In this part of the story, Uncle Tom changed another people’s life by simply encouraging them with the help of his faith and stand on Christianity and Christ (Stowe). Legree, noticing about the escape of the two slaves, punished Tom and beat him all the time as for a change because he did not want to tell his master where the two escaped people have gone. On the time that Tom notice that he is near death, he gave forgiveness to all those who have committed sin unto him and died a martyr death (Stowe).

His former owner, Shelby, was too late to buy for his freedom from the cruel master. At the end of the story, all the people whom were a part of Tom’s journey and experiences became happy. They all realized the essence of Tom in their lives and decided to live a life as Tom did to his. Analysis Uncle Tom’s maturity does not pertain particularly to the youthful growth until his old days, but therefore, it pertains to the growth of faith and love which Tom shared with all the people around him; from his very first master until his last master even tough his last owner is cruel to him.

His faith’s intent became stronger and stronger with its conviction as he experienced all the pain that he endured during his life and for that he became more determined with his belief. With the help of Eva and those other people whom he took courage and strength from, Tom continued being a person full of life, hope, and heaven even during being on earth. 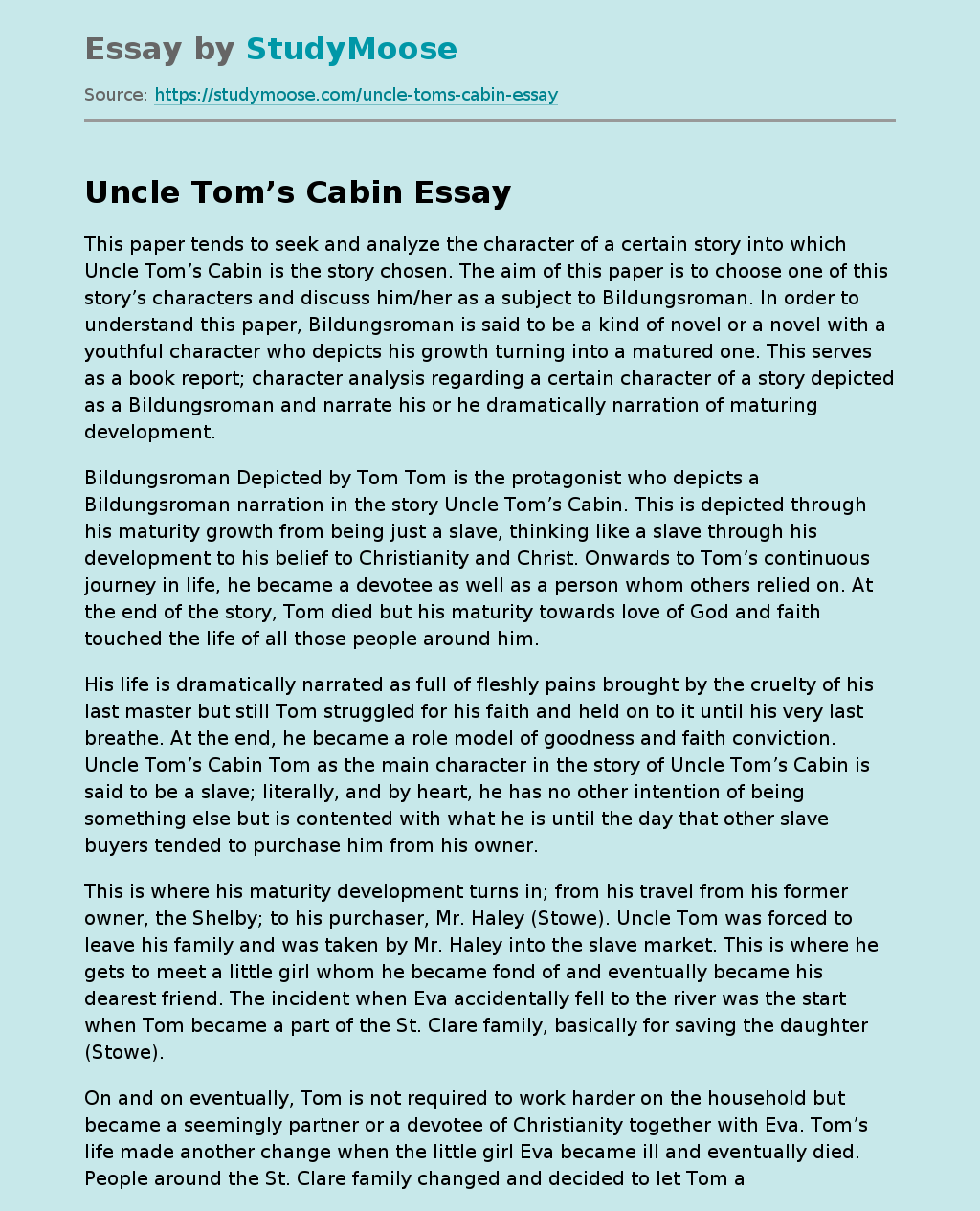