The Meaning of Courageous in Uncle Tom's Cabin

In Harriet Beecher Stowe’s novel “Uncle Tom’s Cabin” we meet many characters that are courageous however some are more courageous than others. We meet Senator Bird who helps pass the Fugitive Slave Act, which made helping runaway slaves illegal. Eliza who is an intelligent young slave who also is a mother and wife. We also meet Senator Bird’s wife who felt sympathy for slave mothers because she lost a child. These are just a few of a plethora of the characters we meet.

Don't use plagiarized sources. Get your custom essay on
“ The Meaning of Courageous in Uncle Tom’s Cabin ”
Get custom paper
NEW! smart matching with writer

The more important character in this novel is, of course, Uncle Tom himself who’s a slave that has a strong belief in god which gets questioned a couple times.

The most courageous character in the novel has to be Eliza due to the acts that she performs in order to protect her family from the slave trader. In order to escape, Eliza does something unbelievable, she jumps across the Ohio River from the south side to the north side.

Obviously not in one leap, however, she scrambles across dangerous ice floes for the width of the river, cutting her feet to shreds and enduring the pain that no one wants to go through. That wasn’t the only act either, just when the reader thinks Eliza is home free another obstacle arises. Due to Senator Birds Fugitive Slave Act, even in the northern states, slaves are not free the act makes it dangerous for any escaped slave to be in the North because it’s illegal to help slaves and you must help to get the slave back to the rightful owner.

Stowe wants the reader to become angry with the book and think to themselves “with everything she’s been through why isn’t she free, she’s earned it”.

Uncle Tom is another courageous character because of how unbreakable his spirits are. He is deeply religious and he uses his faith as protection from the pain because he always knows that God will help him and everything will be ok at the end. He does whatever he can to make sure that the other slaves know that there is still hope for them. He still is a human so he feels pain when he is getting beaten he does question his faith very briefly but he dies a religious man that stayed true to the religion. He respected his fellow slaves and when he knew that Cassy and Emmeline hid in the garret he knew that Legree would kill him for not giving up where they are but he keeps his mouth closed and takes his beating. Tom tells Legree “I’d give ye my heart’s blood; and, if taking every drop of blood in this poor old body would save your precious soul, I’d give ’em freely, as the Lord gave his for me’ (Chapter 40). Even Tom’s death is a heroic scene, Legree beats Tom all night, and then he orders Sambo and Quimbo to continue the beating. Tom prays to the end, touching Sambo and Quimbo’s hearts and Tom prays that their hearts can be saved as well.

These are just some of the many characters in “Uncle Tom’s Cabin” that have shown acts of courageousness. Harriet Beecher Stowe uses historical facts to play with the readers emotions and to teach the reader that a common misconception is that in the north slaves were safe, but they weren’t, as she proves even if you escaped to the north you still wouldn’t be safe because of the Fugitive Slave Act which tells slaves that there is nowhere that is safe for them to run to. It’s tough to decide which characters are the most courageous however, a good place to start is with Eliza and Uncle Tom as both of them are excellent examples of what courageousness looks like due to their willingness to want to keep fighting and believe in what they want to believe in for tom it’s god and Eliza it’s that she needs to protect her family.

The Meaning of Courageous in Uncle Tom's Cabin. (2021, Dec 07). Retrieved from https://studymoose.com/the-meaning-of-courageous-in-uncle-tom-s-cabin-essay 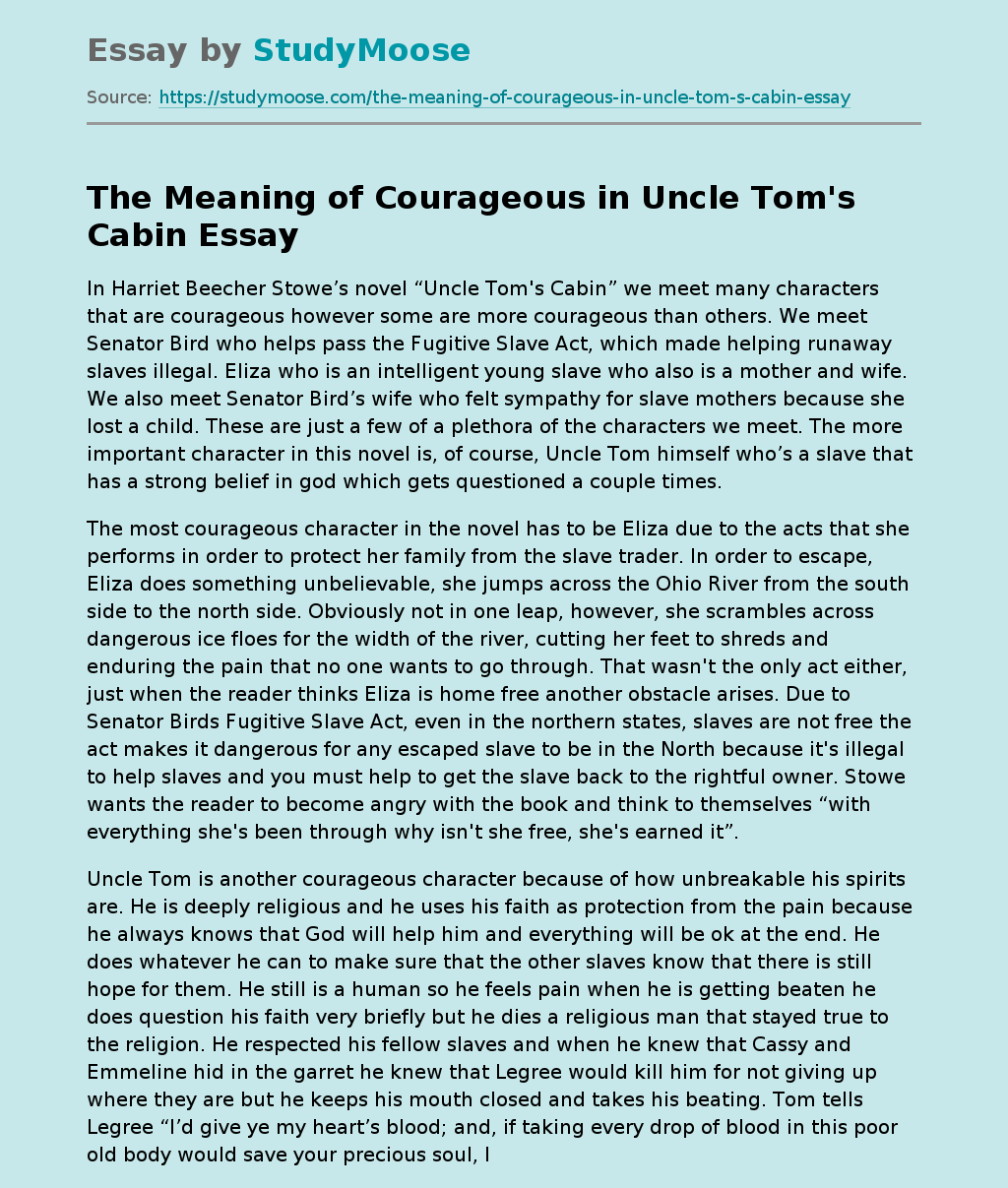