The introduction of Uncle Toms’ Cabin or the premise is the book focuses on different plots going on at the same time, but they all somehow involve Tom in some way. The main characters are Tom, George, and Eliza who are slaves. Eliza and George were married and had a son named Harry. The couple had two other kids, but they passed, which later shows why they are so protective over Harry. Tom was a slave, but he was basically portrayed in my opinion as a slave that would go above and beyond to please his master.

Whether the master was wrong or right based off his Christianity beliefs.

In Uncle Toms Cabin we start off with Mr. Shelby a plantation owner talking Mr. Haley about the sale of some of his slaves so that he can get rid of the debt that he has. He offers up tom because of his personality but is told that he would need another slave to clear up the debt.

Eliza child Harry is brought up to be sold so that he can give him two slaves, so he can clear up the debt.

Eliza husband George is considered to a mulatto and he is very smart. He is so smart he created a machine that cleans hemp fast. His master did not like that, so he told him he was lazy and took him from the factory to do labor. Which caused him not to see Eliza, so he tells Eliza that he wants to escape.

His plan is to work in Canada to make enough money to free her and his son.

Eliza objects to wanting to leave because she believes its going against her religion and that they should just pray. Later, Eliza overhears Mr. Shelby and his wife arguing about the selling of the slaves. Mrs. Shelby is confused and angry because she was under the impression that they were about to lose their house. Plus, she promised Eliza that they would not sell her son.

Eliza overhears and goes to Tom’s cabin while they are praying and warn him and his wife that they must escape. Tom does not agree with Eliza because that would go against the master. However, he tells her that he thinks that it would be wise to leave with Harry. So, Eliza leaves with her son that night but before she leaves, she tells them to tell George where they are going.

Mr. Haley goes after Eliza and harry but Mrs. Shelby and the other slaves hinder him by messing with the horses, fixing him lunch, and riding slow. They also alert Eliza so she finds a way across the Ohio river, so she does not get caught. After not having any luck being able to capture Eliza, he hires Loker and his team of slave hunters to catch her and bring her back.

She meets up with different white people who help her along the way on her way to a Quaker settlement.

Meanwhile George runs away, and his master put out a reward on him for capture. He goes to a hotel where he is recognized by the owner of the factory Mr. Wilson. Who gives him freedom because of respect for him. He also begs him to tell his wife to try to run away because he still thinks she is on the plantation. Eliza gets to the settlement and is taken in By Rachel where Rachel learns of her last name, alerts her that her husband was on the way to the same settlement. George and Eliza reunite and make their way up to Canada.

At the same time while all of this is going on Tom is transported by boat to the south, so they can be sold once they get there. While on the boat Toms obedient behavior leads him to be able to walk around the ship freely. Where he makes friends with a little girl named Eva who is very sweet to everyone. One day on the boat she falls over the ship and starts to drown and Tom jumps in to save her.

From that day because he saved Eva her father Mr. St Clare buys Tom from Mr. Haley. Tom being the good and obedient slave that he is valued by the family and they become very close. Not only based on him being obedient but because of his Christian beliefs. Everything kind of goes fine for Tom until Eva gets sick and dies. Then everything for Tom kind of goes downhill in a series of events. St Clare who was going to free Tom but ends up getting stabbed and dies. Which all his slaves become property of Marie his wife who because she does not like slave and because she is evil decides to sell tom to a very mean slave owner even though she knew what her husband was going to do. He is sold to Mr. Legree who bout three more slaves including a woman named Emmeline.

Meanwhile with George and Eliza Mr. Haley’s slaveowners are still searching from the while they were trying to get to Canada. At one-point Loker and his gang catches up to them and George must shoot Loker. That causes his gang to leave him, but they decide to take Loker with them and help him. Eliza, George, and Harry finally make it to Canada with help from Loker who has changed his ways and they finally get freedom.

Tom who is now on the Legree plantation is tortured every day. All the slaves at this plantation are all mean to each other which keeps all the slaves low in spirits’ gets beaten for anything for example because he refuses to beat a slave he was beaten. When you think Tom can’t handle the abuse anymore, he gets visions that makes him believe everything will be ok.

Emmeline and Cassey another slave on the plantation that was used for sex devised a plan to escape by acting like they were ghosts. They escaped and because Legree already didn’t care for Tom accused him of knowing where they were beats Tom while at the same time George Shelby who is Mr. shelbys child comes to save him but its too late. Before Tom dies, he sees George and passes content.

Emeline and Cassey so happen to be on the boat with a woman named Madame de Thoux. She so happens after having a conversation with Mr. Shelby that George Harris is her brother while Cassy also listening finds out Eliza is her daughter. So, the women go to Canada and meet their family members. Mean while Mr. Shelby basically crusades for the slaves and eventually goes back to free the slaves on his father’s farm and reminds them on all the things that Tom did.

Evaluation of the book:

The information in this book was presented in like a third person telling the story. The way that I felt about the book overall is indifferent. I say this because it did help white people think about that slavery was wrong but at the same time, I feel like Stowe wasn’t being realistic. She can’t truly understand how it felt to be a slave and what they had to go through by the way she portrayed some of the characters especially Tom.

I feel up until they were threatening to take away the slaves at the plantation the feel was it was okay plantation. Up until tom was sold to Legree it was made like he was treated good. I also felt like Stowe created that stereotype of Uncle tom that we still say currently in todays society. Because he is a black man that will literally say yes or do whatever “masta “say that makes him happy.

That made me feel upset with how that character was portrayed because I believe that at some point, he could of stand up or did anything because at the end he faced so much cruelty I can’t really believe that he just never stood up for himself. I feel like it is comparable because I feel like there is a lot of “uncle toms “in todays society who want approval from whites and willing to do anything to please them. 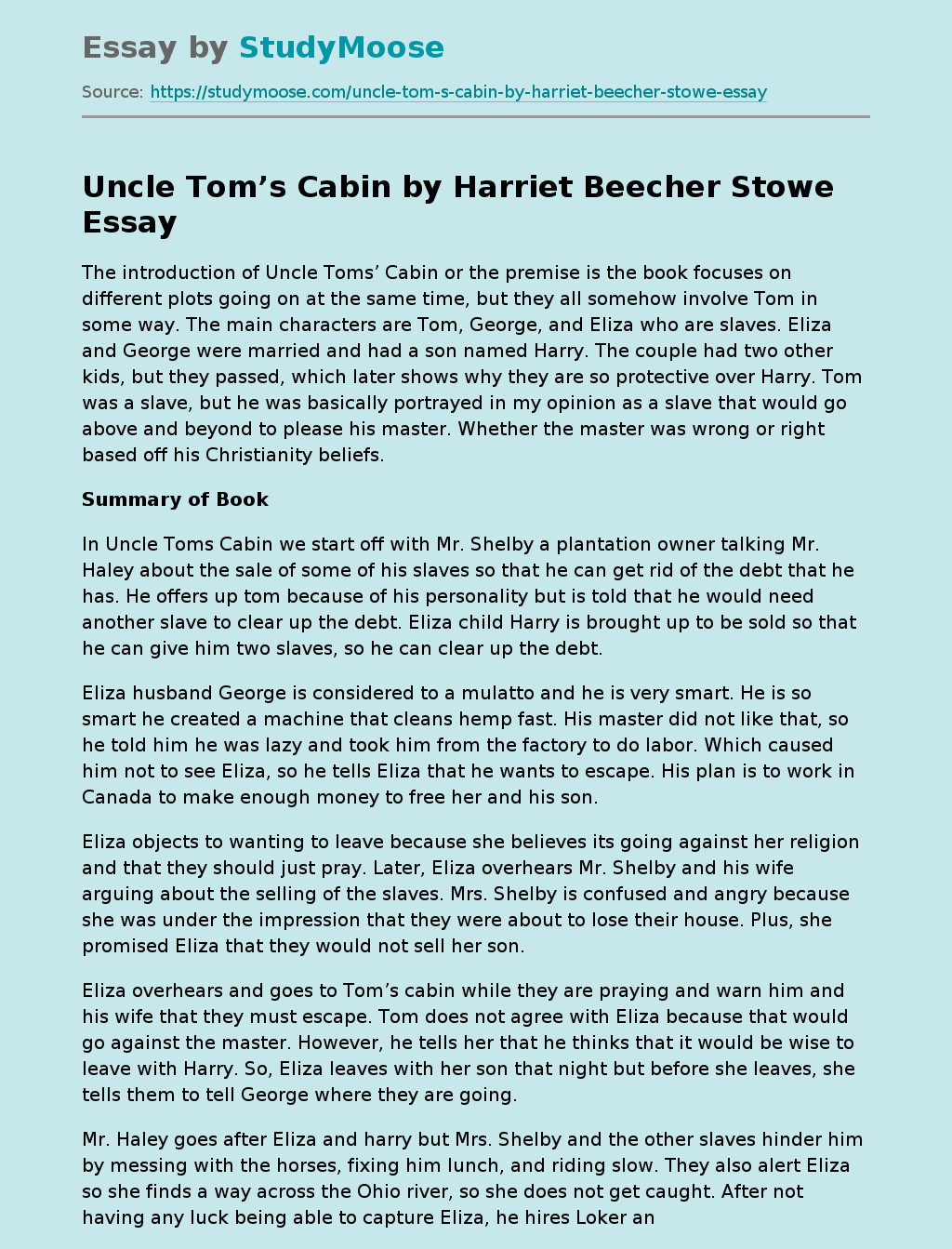