Ulysses is a poem that shows the struggles and triumphs of a man that has suffered, endured and conquered all that has been put before him. Throughout the poem, we can see his character building as he reminisces on his life and what he would like his future to be. Ulysses finds himself and who he wants to be, and learns how to use that towards his future goals. Ulysses is aware of the fact that he will die soon as indicated in line 43 “When I am gone.

Don't use plagiarized sources.
Get Your Custom Essay on “Ulysses” by Alfred Tennyson – Poem Just from $13,9/Page

He works his work, I mine.” He is aware that he must leave his wife and son when he passes away, but he is willing to leave them to go on adventures and explore the world.

Ulysses exploring doesn’t just have to do with exploring the world but also with exploring himself; his emotions, his feelings, his thoughts; they all correlate with travels and adventures. This is a sentiment that most can relate to, not only in the poem but also in real life.

With age comes experience with different problems and situations and with experience comes wisdom. The challenges and life experiences that Ulysses endured and conquered developed his character and heroic attributes which is a belief that most people still harbour in this day and age.

In this poem, Lord Tennyson expresses a message that Ulysses has communicated throughout his travels and adventures; he still would like to seek more knowledge and more experience through his journeys. Even if Ulysses dies in the process, he will always have the personal satisfaction of knowing that he has seen and experienced everything that he could in life. Lines 12 to 14 are “For always roaming with a hungry heart Much I have seen and known – cities of men And manners, climates, councils, governments” which shows that Ulysses has been through a lot of different experiences in his lifetime and has seen all sorts of diverse lands in his lifetime.

Lines 57 to 61 are “‘Tis not too late to seek a newer world. Push off, and sitting well in order smite The surrounding furrows; for my purpose holds To sail beyond the sunset, and the baths Of all western stars, until I die” which shows that Ulysses would like to travel and get all that he can out of life until the day he dies. The literary devices used in this poem appropriately describe Ulysses journeys and experiences.

The literary devices that Lord Tennyson used in his poem helped convey the theme more efficiently by making a statement. In this poem there are many different examples of personification and metaphors that strengthen the theme. Line 11″…I am become a name” and line 24 “…Life piled on life” are examples or personification strengthening the theme. They show abstract ideas of persons, but add a more personal touch that show a relationship between Ulysses and the general sentiment. Metaphors play one of the largest parts in strengthening the theme in the poem, as Ulysses relates his life to objects.

Perhaps the most validating metaphor is in lines 22 to 23 where it says “How dull is it to pause, to make an end, to rust unburnished, not to shine in use!” This shows Ulysses comparing his current life to a sword. If he does not live his life to the fullest, it is like having a dull sword that cannot be put to good use. These literary devices help enforce the message and theme of the poem which is that Ulysses wants to gain more knowledge and more experiences while he is still living.

Many people in the modern world today have the same opinions as Ulysses. This poem was written in the 1800’s and the myth takes place much before than, but the same views on life are still shared. Many people believe in taking life for all that it is; making the best of life. Even though people today would not go on quests and take their adventures to the extreme like Ulysses, many journeys are taken in smaller feats each day. Journeys such as getting a job, getting married and having children are adventures that seem small in proportion to Ulysses journeys, but they are important feats of self discovery to the modern individual. Since technology and social patterns have changed drastically, there are not many journeys similar to Ulysses, but the adventures that happen in the modern day person’s life has an impact on self discovery, and teaches the “theme” of life.

The challenges and life experiences that Ulysses endured and conquered developed his character and heroic attributes which is a belief that most people still harbour in this day and age. It is amazing that a poem that both take place and that were written such a long time ago can still be associated with real life in the modern world. Timeless pieces of literature such as Lord Tennyson’s poem and Greek mythology will always have the ability to correlate to modern day life no matter what day and age it is. The relation between Ulysses experiences and the modern day persons experiences are best described in lines 68 to 70 of the poem; “One equal temper of heroic hearts, Made weak by time and fate, but strong in will To strive, to seek, to find, and not to yield.” 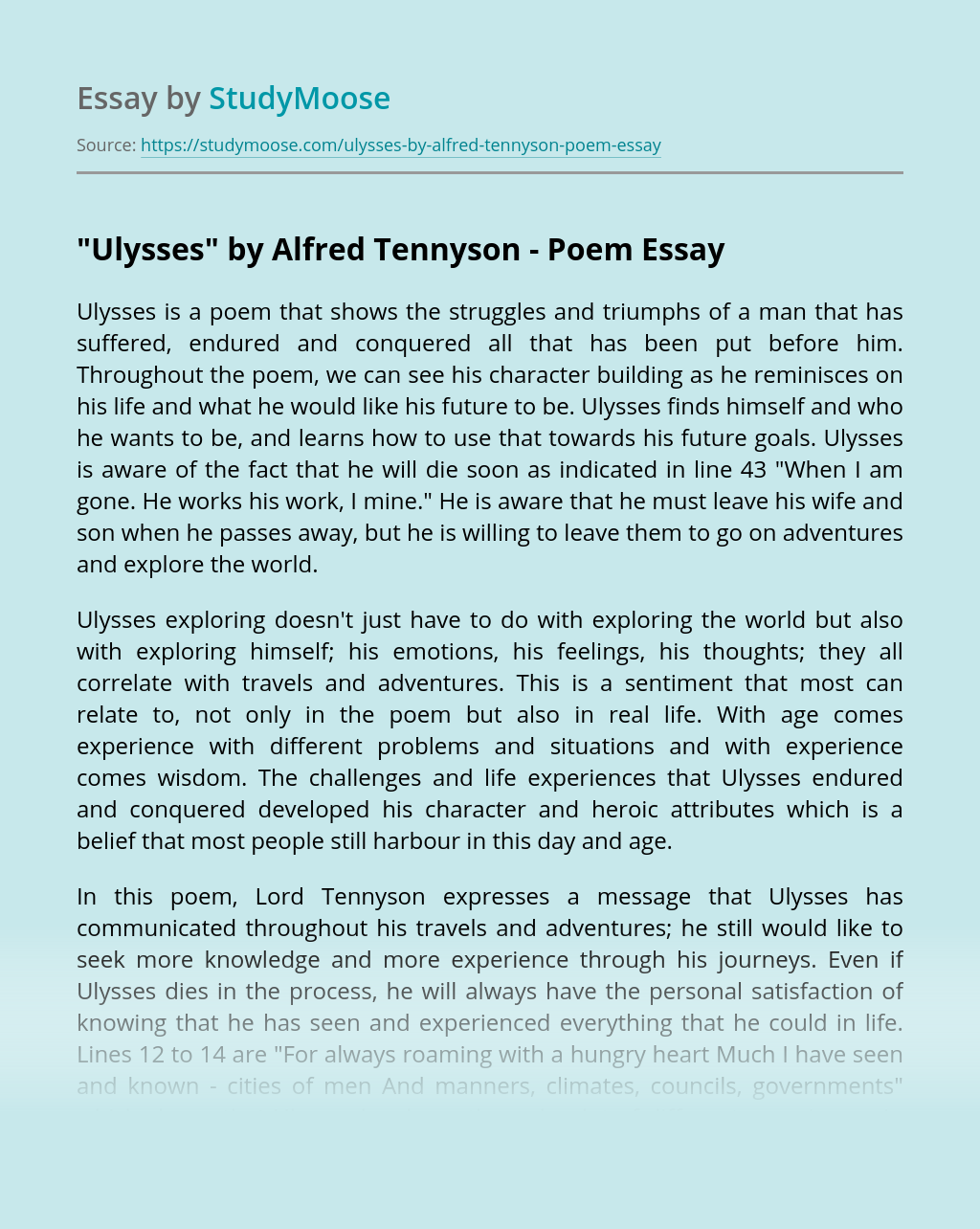