Ulysses S. Grant and Robert E. Lee are two of the most effective military leaders in American history. These men have become symbolic of the two nations at conflict during the Civil War. Both had very different backgrounds and personalities that caused them to differ in their military leadership and accomplishments. Even though General Lee would surrender his army to General Grant, Lee throughout the course of the war proved himself to be a better military leader. The childhood of Robert Edward Lee played a pivotal role in the way he would see the world as a man.

Lee was born into an aristocratic family of Virginia with a deeply rooted American history. Richard Henry and Francis Lightfoot Lee, Robert E. Lee’s uncles, helped draft resolutions that would lead to the Declaration of Independence, both would sign it1. Lee’s father, Henry “Lighthorse Harry” Lee III was a revolutionary war hero and one of George Washington’s most dependable fellow countrymen.

In 1771, Washington, also from Virginia, wrote: “ I know of no country that can produce a family all distinguished and clever men, as our Lees.”2 Lee’s mother and father were strong influences in his life for very different reasons. Lee’s father would define everything Lee did not want to be. Lighthorse Harry lacked self-control and failed to take care of the family. Ruined by failed financial ventures, Lee’s father would be sent to debtor’s prison. His mother, Anne Hill Carter Lee would raise young Robert to love God, to serve God and to serve his country.

Lee’s rearing helped him to develop the highest standards of honor, self-denial, self-control and duty that would earn respect from both friends and enemies.3 Ulysses S. Grant came from a more humble upbringing. Like Lee, Grant traces his ancestry deep into American history in his memoirs. Grant’s ancestors settled in Massachusetts in 1630.4 Grant’s father, Jesse R. Grant came from a broken family and was fostered by the parents of John Brown.

5 The same John Brown that would attempt to start a slave rebellion by attacking the United States armory at Harper’s Ferry in 1859. Men under the leadership of then Colonel Robert E. Lee ended that raid.6 Grant, was not born into the land owning aristocracy like Lee, his family was frontier men. Grant “…had come up the hard way…No man was born to anything, except perhaps to a chance to show how far he could rise. Life was competition (Catton, para 5).”7 Grant’s competitive upbringing would give him the motivation to push forward and the demand results needed to defeat Lee. Robert E Lee would carry the lessons he learned as a child with him to the Military Academy at West Point. While attending West Point, Lee was very studious and did not join 8other cadets for evenings at the local taverns. General Lee graduated second in his class at West Point and received no demerits for misconduct. This record has never been matched and will not likely ever be achieved again. By graduating with honors, Lee was assigned to the United States Army Corps of Engineers.

The time Lee spent with the Army Corps of Engineers gave him valuable knowledge of different types of terrain and fortification constructions that would serve him well in the Civil War.9 The childhood of Ulysses S. Grant would also affect him at West Point. Grant was not interested in a military career; he was more interested in agriculture.10 It was Grant’s father who requested his appointment to West Point.11 Grant stated in his memoirs, “A military life had no charms for me, and I had not the faintest idea of staying in the army even if I should be graduated, which I did not expect (Grant p19).”12 Grant spent most of his time at West Point reading novels and avoiding “…books related to the course of studies (Grant pg 20).”13 Unlike Lee, Grant would not excel at West Point. Grant graduated 21 out of 39 in his class, just below average.14 The Mexican American War would be both Lee and Grant’s first battle. Lee and Grant would both serve under General Winfield Scott, a man whom they both admired, during his campaign to Mexico City. General Scott saw greatness in Lee and stated his “…success in Mexico was largely due to the skill, valor, and undaunted energy of Robert E. Lee.”15 Scott was also heard commenting a few years later that; “Lee is the greatest military genius in America.”

16 Grant, only a first lieutenant, did not get an opportunity to show much leadership. Grant did however serve with valor. At the Battle of Monterey, Grant would gain some respect among his peers by successfully carrying much needed ammunition to his regiment while under fire.17 During the Civil War, Lee and Grant would implement skills learned while under the command of General Winfield Scott. In the spring of 1861 as the nation leaned toward Civil War, both Grant and Lee would be forced to make very difficult decisions. Grant would only have to decide between being a patriot or a traitor. In a letter to Grant’s father he wrote: “There are but two parties now, Traitors & Patriots and I want hereafter to be ranked with the latter. . . (Grant p 957)”18 Lee was torn between a successful career in the United States Army, his devotion to the Union, an appointment as commander of the Union forces and the love he had for his family and homeland. In a letter to his sister, Lee wrote: “ With all my devotion to the Union…I have not been able to make up my mind to raise my hand against my relatives, my children, my home.

19 The decisions these two men made would send them on a collision course in one of the most costly wars the country has every waged. Throughout the Civil War, Robert E Lee would prove himself to be unmatched in leadership. When Lee took control of the Army of Northern Virginia in June of 1862, the Union army “…was thundering at the city gates…(Lee p150)”20 of the Confederate capital of Richmond. In three months, Lee would achieve what his predecessor General Joseph E. Johnston could not. Lee defeated the invading Union army and turned the war in favor of the South. It would take President Lincoln almost one year to find any competition for General Lee. That competition would be General Grant and the vast resources the North offered him. The vast resources and the advanced railroad system of the North would give Grant the advantage he needed over Lee.

In a letter to Confederate President Jefferson Davis, Lee expressed his concern that “…Every train brings recruits, and it is stated that every available regiment at the North is added to it…(Lee p108)”21 The Army of Northern Virginia’s lack of provisions were “…so great…I cannot see how we can operate with our present supplies (Lee, p 108).22 Before Lee ever met Grant on the battlefield he was trying to prepare for multiple retreats that would allow him to resupply his army. Lee pleaded with Jefferson Davis that “Every exertion should be made to supply the depots at Richmond and at other points (Lee, p 108).” 23 Grant carelessly used his resources to attack Lee and “…after thirty days of marching…fighting and a with a loss of more than sixty thousand men, General Grant…”24 arrived at Petersburg, “…which he could have done…without the loss of a single man.”

25 The sixty thousand men that were expendable to Grant was more than Lee had in his entire Army of Northern Virginia. Lee eventually was forced to surrender his army of “…less than eight thousand men…to Grant’s army of 150,000…”26 Prior to the surrender Union officers had “…always estimated your [Lee] force at about seventy thousand men.”27 The leadership displayed by Ulysses S. Grant and Robert E. Lee throughout their military careers is directly related to their childhood and education at West Point. Grant’s childhood made him competitive but his lack of interest in the curriculums at West Point would set him back militarily.

If Grant did not have the expendable resources that were available to his Union Army, he would have failed against Lee’s ability to fight with such limited resources. Lee’s self struggle to lead by example combined with his devotion to duty and the men in his army resulted in many victories over impossible odds. Lee did not surrender to Grant’s leadership traits; Lee “…was compelled to yield to overwhelming numbers and resources (Lee p 138)”28 1 James A. Henretta, David Brody and Lynn Dumenil, America: A Concise History, 3rd Edition, 3rd ed. (Boston: Bedford/St. Martin’s, 2005), 157-58. 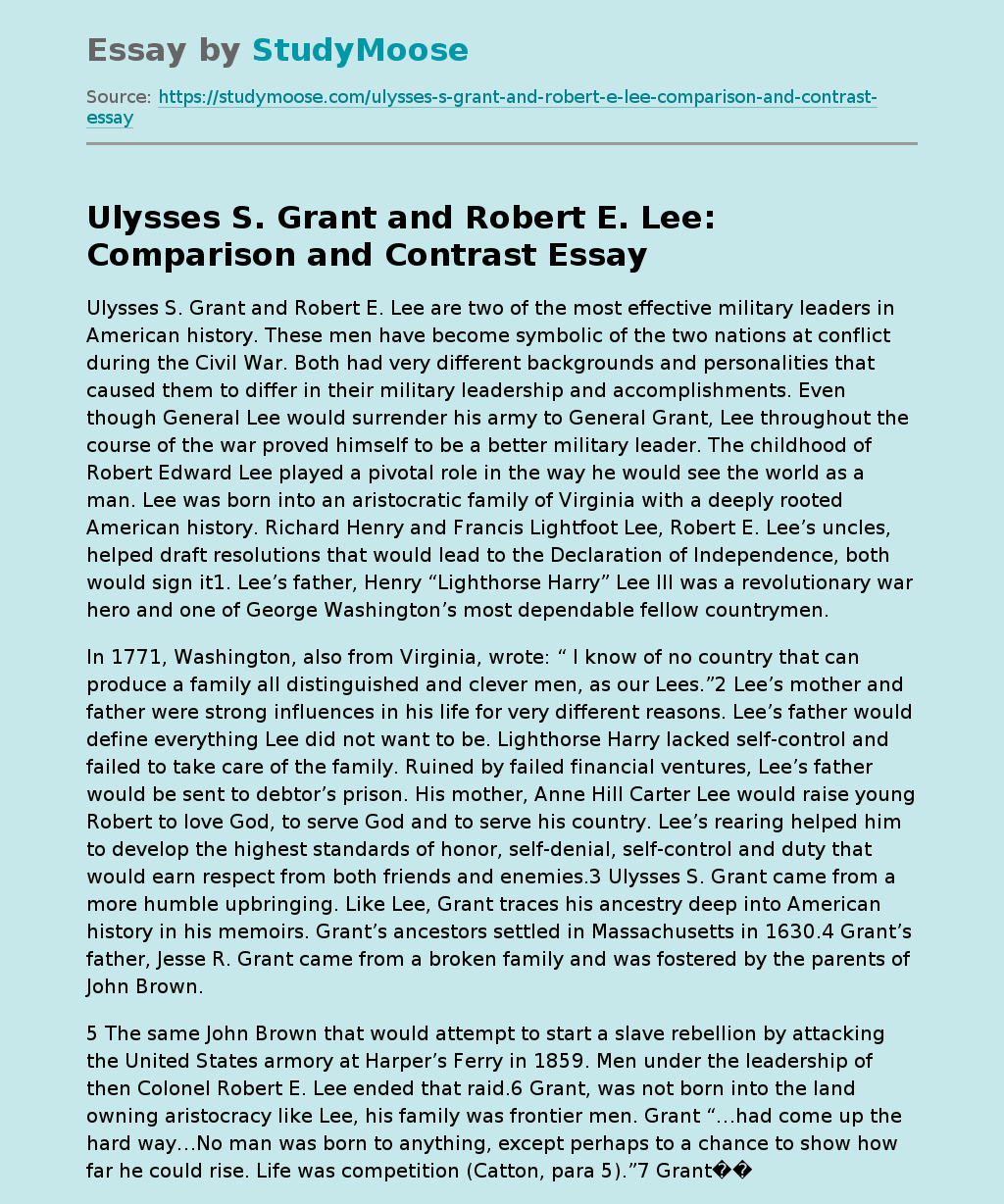