Types of Dreams and Their Meanings

A dream is a series of images, emotions, sensations, and ideas that occur during periods of REM (rapid eye movement) sleep. Although there is no agreement of thought on why people dream, dreams have long been a source of interest and discussion among many philosophers and scientists for years upon years. In order to dream, you have to go through certain stages in order to dream. In the first stage, your body temperature drops, and your brain waves begin regular alpha rhythms, symbolizing a relaxed state.

Don't use plagiarized sources. Get your custom essay on
“ Types of Dreams and Their Meanings ”
Get custom paper
NEW! smart matching with writer

Most dreaming occurs during the fourth stage of sleep, known as rapid eye movement (REM) sleep (Cherry). REM sleep is characterized by eye movement, increased respiration rate, and increased brain activity (Cherry). There are also different types of dreams. There are dreams that make you have the ability to change them, make you wake up panicking and sweating, make you scream and cry, make you drift off, or even keep occurring.

While being in a deep sleep, our being enters a different state of mind, but is aware of being awake.

This is called lucid dreaming. “In a lucid dream, the prefrontal cortex regions of the brain involved in self-awareness and critical thinking while we’re awake are reactivated during lucidity,” explains Dr Aspy. “This seems to be what allows you to experience the dream state consciously and with self-reflective awareness” (Jacobs). Lucid dreaming can be a fun, interesting, and enjoyable experience or ride, but is by far more than just that. Exactly is lucid dreaming? A lucid dream, also known as a conscious dream, is where the dreamer becomes aware that they are dreaming while the dream is in progress. As a lucid dream continues the waking mind gains control (Alchin). This type of dream most often occurs during the fifth sleep stage, which is when REM sleep occurs. REM sleep is a kind of sleep that occurs in intervals during the night and is characterized by rapid eye movements. More dreaming and bodily movement as well as faster pulse and breathing are present during this stage. While your body is basically paralyzed, your eyelids are still moving. So far, scientists have been able to study lucid dreamers due to tiny movements from test subjects that were paid with an electroencephalograms (EEGs — a test of the electrical brain activity)(Lambert). Even with being in this different kind of world, you can have to ability to change what is happening in your dream, which can make your lucid dreams even more fun.

Have you ever woken up from a dream with you panicking and your heart racing? It is most likely that a nightmare disturbed your sleep causing you to wake up .Nightmares are more often to occur in the middle of the night or early morning. A nightmare is a terrifying or deeply upsetting dream of particular intensity causing strong feelings of fear, horror and distress (Alchin). Whenever we have a nightmare, our feelings catch up in an uncontrollably terrifying experience (Ullman & Zimmerman 26). Nightmares are more common for children, typically between the ages of three and six. This is because children’s imaginations are very active, and fears also develop during these ages in a child’s life. When a child turns to the age of 10, their nightmares begin to decrease. Even though nightmares are most common in children, adults also have them, just not as often. An estimated 50-85 percent of adults report having the occasional nightmare. Nightmares tend to become less frequent and intense as you age. Women tend to report nightmares more often than men, but are also more open to discussing their dreams (Nightmares). To keep from having nightmares, be sure to get away from stress and anxiety, and to have a regular sleep routine. Being overtired can increase your risk for nightmares.

A type of dream that is similar to nightmares are called night terrors. Night terrors are basically nightmares but far worse. Night terrors cause you to scream or cry from an intense state of fear. A night terror occurs when a child’s central nervous system (CNS) becomes over-aroused. Researchers believe kids are vulnerable to this kind of overstimulation because their CNS is still forming (Roland). These frightening dreams occur during stage four in the sleep stages. During stage four, you have occasional movement. You are in your deepest sleep, and it is very difficult to be woken up. You are not able to recall thoughts if you are disturbed and woken up, and your heart rate continues to droppen as well as your temperature. Night terrors normally last anywhere from 5 to twenty five minutes unlike nightmares.

Nightmares usually last 5 to forty-five minutes. The circumstances of the nightmare will frighten the sleeper, who usually will wake up with a vivid memory of a long movie-like dream. Night terrors, on the other hand, occur during a phase of deep non-REM sleep usually within an hour after the subject goes to bed (Richards). Many report not remembering their night terror. But, they do remember what made the frightened, which would be a the vivid picture. Although night terrors are not dangerous, what you do during them is what can be dangerous. Imagine a bad guy chasing after you. You’re running from him in the dream, but you do not know you are sleepwalking in reality. While sleepwalking, you could use kitchen appliances without even knowing it. You could end up hurting yourself or even a loved one. To treat night terrors, medication is recommended as well as having the same sleep schedule, lifestyle changes, and home remedies.

Daydreaming is far more different from nightmares. Daydreaming allows us to fantasize something that we would rather be doing while being awake. Everyone, or nearly everyone, reports daydreaming on a regular basis, with studies indicating that as many as 96% of adults engage in having at least one bout of daily fantasies (Whitbourne). It also allows our imaginations to wander, making us lose our sense of self. As we daydream, our brain seems to open up to the possibilities of life, getting endorphins flowing in a way that nothing besides physical activity can do – except for using our imaginations (Praconsulting). Scientist have came to the conclusion that they cannot tell a difference between imagination and reality when we daydream. The visual information from real events that the eyes see flows “up” from the brain’s occipital lobe to the parietal lobe, but imagined images flow “down” from the parietal to the occipital (Wanjek). This causes our mind itself to be creative. Even though daydreams can be pleasant, they can so interesting that they can make us not pay attention, as well as make us forget what we are supposed to be doing, or not know what’s going on around us.

A recurring dream is a dream which is experienced repeatedly over a long period of time. Recurring dreams can keep repeating for weeks, months, and even years. These types of dreams can leave you feeling puzzled or even frightened. Recurrent dreams are often comprised of typical dream themes. What differs about recurrent dreams is that they are experienced frequently and repetitively in one individual’s life, whereas typical dream themes refer to the universal or inter-individual commonness of dream themes (Carr). Recurring dreams are mainly caused by stress. If a recurring dream doesn’t appear for a long period of time, chances are that the dream will reacurre in a time of stress. When we are exposed to being harmed within our lives, we often have a dream which depicts the problem and shows where we are in relation to it (Ullman & Zimmerman 26). If we do not manage to overcome our problem the first time in that particular area, chances would be that we would come across the problem again. Having this happen would result in us having the same recurring dream.

Everyone dreams several times a night. Some may not remember, or some may not be able to forget. All dreams are stories and images our mind creates while we are asleep. Dreams show life experiences. Some people think dreams are meaningless, and some think it’s their mind telling them something. There are dreams that make you have the ability to change them, which are lucid dreams. Lucid dreams come in very handy when you are wanting to change the dream, or story so to speak. Nightmares cause you to wake up panicking and sweating. They also have the ability to make you so frightened that you do not want to fall back asleep because you are scared that you will have that dream once again, or even one that is worse. Night terrors cause you to wake up screaming and crying. You do not remember the whole dream, you just remember the vivid picture that frightened you. Daydreaming is very common which is a dream that makes you drift off and forget what is going on around you.

Reoccuring dreams often occur when you are stressed or have a problem with a specific topic. Psychologists are sure that dreams are the result of what we wish or think about when we are awake. For example, Freud, a famous psychologist, considered that if a man did not have sexual relations for a long time, he would dream about them. If you think about someone, you may also dream about him/her. Many say that if you do not know a person in a dream, you saw them one day even if you do not remember. Dreams are a very popular topic when it comes to psychologist. Psychologist say dreams are ways in which your subconscious mind communicates with you. Do you listen to them?

Types of Dreams and Their Meanings. (2020, Sep 01). Retrieved from https://studymoose.com/types-of-dreams-and-their-meanings-essay 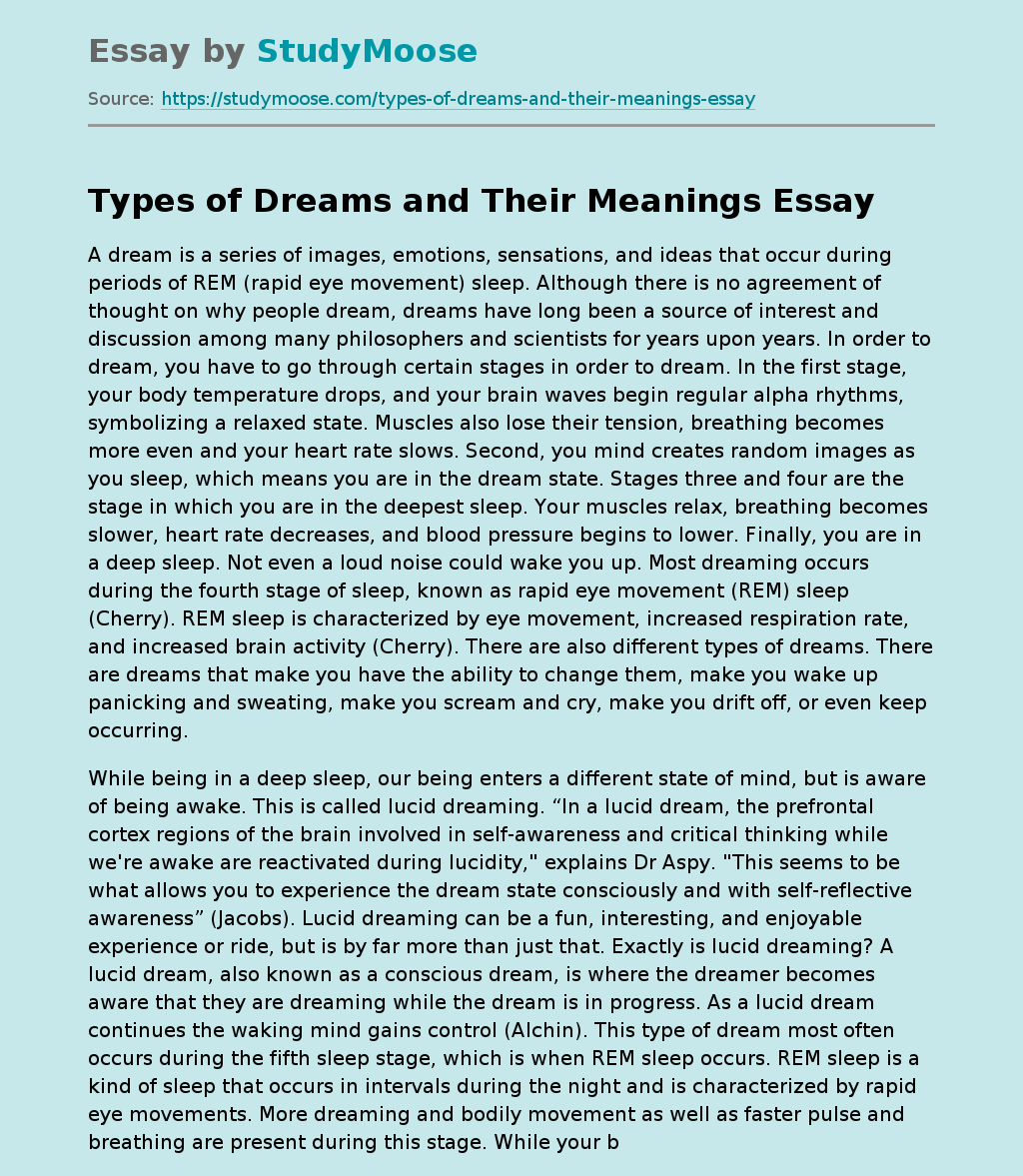