What does “honesty is the best policy” mean:
You should always tell the truth, even when it seems as if it would be useful to tell a lie.

Well-known honesty stories:
It was the favorite motto of America’s first President:
I hold the maxim no less applicable to public than to private affairs, that honesty is always the best policy. – George Washington

The moral of Aesop’s fable “Mercury and the Woodcutter,” a story about two woodcutters – one is honest, the other is not.

Don't use plagiarized sources.
Get Your Custom Essay on Truth and Honesty Just from $13,9/Page

People in close relationships are those who have many activities and practices with us in everyday life; consequently they easily find out what we have told them truths or lies in later short time. Reasons why they may detect the untrue are that we do not remember a lie we have given, then there appears a contradiction between what have been told and what we say later, and that they may get the fact through other people around.

People in close relationships, for examples family, close friends, colleagues…, are those who give us happiness and joys. Dishonesty can easily break the relationships, which then put us in sorrow, sadness and even regret for some time.

Dishonesty may earn money, power and success. However, all these stay for just a short time. Dishonesty cannot face the fact itself. Honesty then shines to push dishonesty away. Honesty pays at the end; as a result, an honest man win a place in hearts of people, which make him successful. He can be remembered and respected even after his death.

Tell the whole truth or leave some of it in secret or use white lies Telling the whole truth, leaving some of it in secret or using white lies depend on each situation. Telling the truth is always a good policy. However, sometimes we find it difficult to uncover a secret, a fact or an idea; in these cases, silence is a best choice rather than telling out lies. 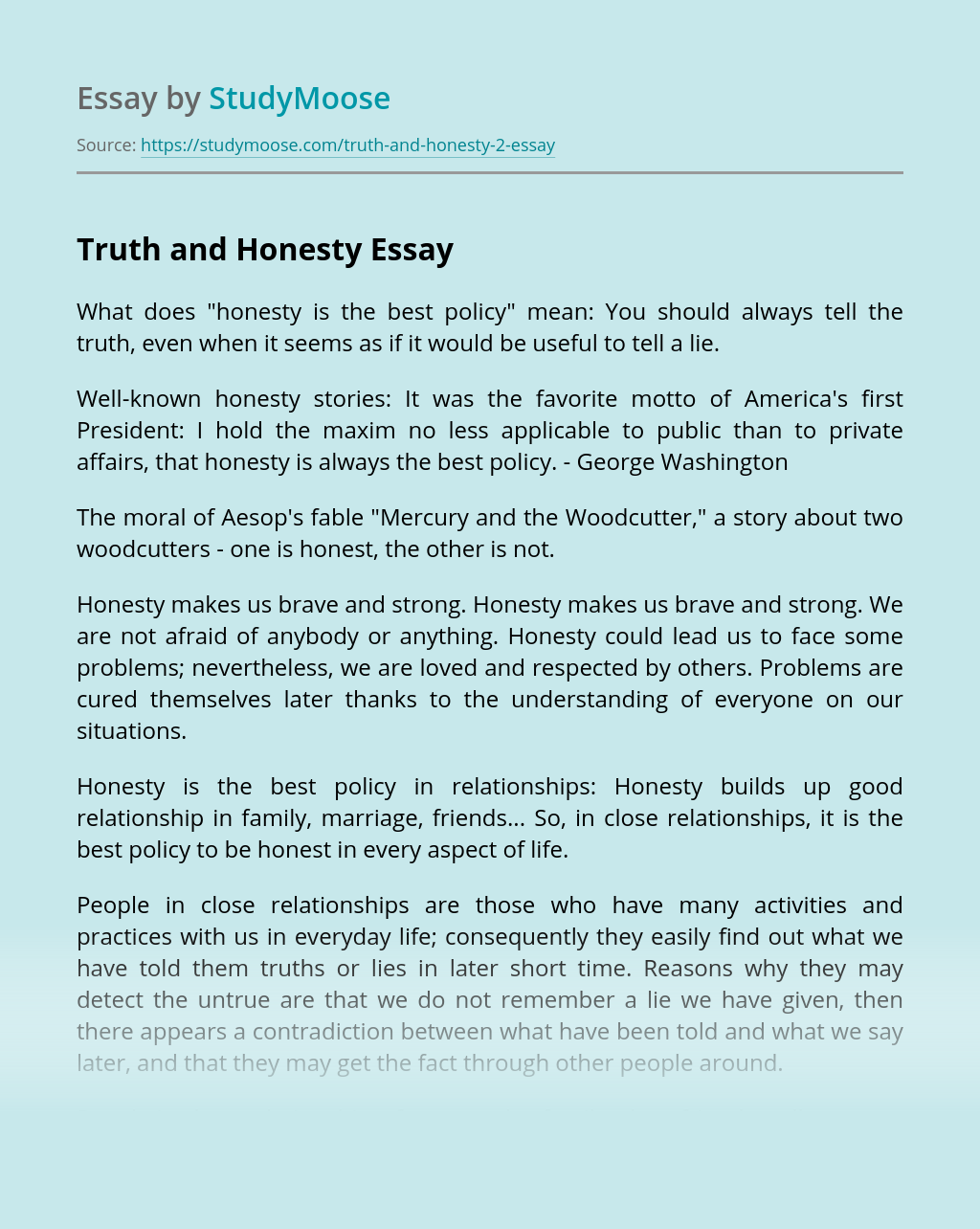 Homework Should Be Abolished

It is a common emotion to students regarding the distaste of homework, but legions of teachers know better because they recognize the importance of homework in the success of students in school and outside of school. I completely disagree with the statement that homework should be abolished. School without homework is not an image I... VIEW ESSAY

INTRODUCTION Over Apple’s thirty-five year history, Apple has become the worldwide model for what a successful company should look like. Apple’s annual revenue climbed to $108.25 billion dollars and their shares rose 75% during the fiscal year of 2011. After winning the _Fortune_ “Most Admired Company” award for the fifth year in a row and... VIEW ESSAY

Danielle Mazur BUS 641: Legal Environment of Business You be the Judge IRAC Analysis Privacy/Employment at Will: Fired for Whistling? Issue: Was there a breach of privacy that contributed to the plaintiff being wrongfully terminated from her position? Rule: Does an employee of a private company have the right to privacy in the workplace? Private... VIEW ESSAY

Frankenstein and blade runner essay Which text do you feel better represents the values of the composer? You must refer to both texts in detail Mary Shelley’s Frankenstein and Ridley Scott’s Blade Runner are two texts from different centuries, but they both share the same values, themes and issues including; the natural world, scientific advancement,... VIEW ESSAY