Stanislaw Lem (Polish pronunciation: [staˈɲiswaf ˈlɛm] ( listen); 12 September 1921 – 27 March 2006) was a Polish writer of science fiction, philosophy and satire. His books have been translated into 41 languages and have sold over 27 million copies.[2] He is known as the author of the 1961 novel Solaris, which has been made into a feature film three times. In 1976 Theodore Sturgeon said that Lem was the most widely read science fiction writer in the world.[3] In 1996, Lem was the recipient of the prestigious Polish national award, the Order of the White Eagle.

Don't use plagiarized sources.
Get Your Custom Essay on Trurl’s Machine Just from $13,9/Page

His works explore philosophical themes; speculation on technology, the nature of intelligence, the impossibility of mutual communication and understanding, despair about human limitations and mankind’s place in the universe. They are sometimes presented as fiction, but others are in the form of essays or philosophical books. Translations of his works are difficult due to passages with elaborate word formation, alien or robotic poetry, and puns. Multiple translated versions of his works exist.

Stanislaw Lem’s “Trurl’s Machine” is the story an inventor who makes an eight-story thinking machine with a major flaw. The story is an attempt to portray the censorship of the people by a communist regime. Lem does this through the use of character, plot and C.

The characters in “Trurl’s Machine” have very different personalities. First, we meet Trurl, the constructor. He is a scientist and an inventor, but he has an artistic side. This he shows by giving the machine face. He has a quick temper and no patience for stupidity. He also is firm in his beliefs as he demonstrates at the end of the story when the machine is trying to get him to give in. “”Never!” roared Trurl, as if he no longer cared what happened, … (Lem).” Klapaucius is Trurl’s friend and rival. He is also a constructor, but a much more light hearted one. He is always looking on the bright side and he never shies away from adventure. He also has a quick wit and is able to put a comical spin on most things. The machine is described by Klapaucius, “Not only is it sensitive, dense, and stubborn, but quick to take offense, and believe me, with such an abundance of qualities, there all sorts of things you might do (Lem)!” It, like Trurl, is quick to anger.

Lem uses the plot of the story to get his message across. In the beginning, the machine declares that 2+2=7. When it meets resistance in the form of Trurl and Klapaucius, who mock it, the machine becomes angered and escapes its foundations in order to chase its tormentors. Here the tormentors become the oppressed. The machine goes on a rampage; it destroys the town that Klapaucius and Trurl hide in and continues to chase them up the mountain. In its anger, the machine causes too much collateral damage and ends up destroying itself.

There is also much symbolism in this story. The machine is meant to symbolize the communist party. It tries to censor the opinions of Trurl and Klapaucius, mainly, that 2+2=4. Trurl and Klapaucius are the oppressed citizens suffering under the communist regime. They are persecuted for their beliefs. The landslide symbolizes the point at which a population can no longer stand their oppressors and must act. The oppressors go too far and cause their own demise.

“Trurl’s Machine successfully portrays the struggle of oppressed people against those who would censor their beliefs. Lem was able to use character, plot and symbolism to achieve this effect. The story shows that if the oppressed stand up to their oppressors, there is a great chance that they will prevail.

Censorship
The inhibiting and distorting activity of the Freudian censor.
Distorting
To twist awry or out of shape; make crooked or deformed: Arthritis had distorted his fingers.
Frequencies
Also, fre·quence. The state or fact of being frequent; frequentoccurrence: We are alarmed by the frequency of fires in the neighborhood.

Oscillation
A single swing or movement in one direction of an oscillating body.

Barbarous
Savagely cruel or harsh: The prisoners of war were given barbarous treatment.

Conforming
To act in accord with the prevailing standards, attitudes, practices, etc., of society or a group: One has to conform in orderto succeed in this company.

Usages
the customary manner in which a language or a form of alanguage is spoken or written: English usage; a grammar based onusage rather than on arbitrary notions of correctness.

Arbitrary
Subject to individual will or judgment without restriction; contingent solely upon one’s discretion: an arbitrary decision.

The character that I like is Klapaucius because Klapaucius is Trurl’s friend and rival. He is also a constructor, but a much more light hearted one. He is always looking on the bright side and he never shies away from adventure. He also has a quick wit and is able to put a comical spin on most things. 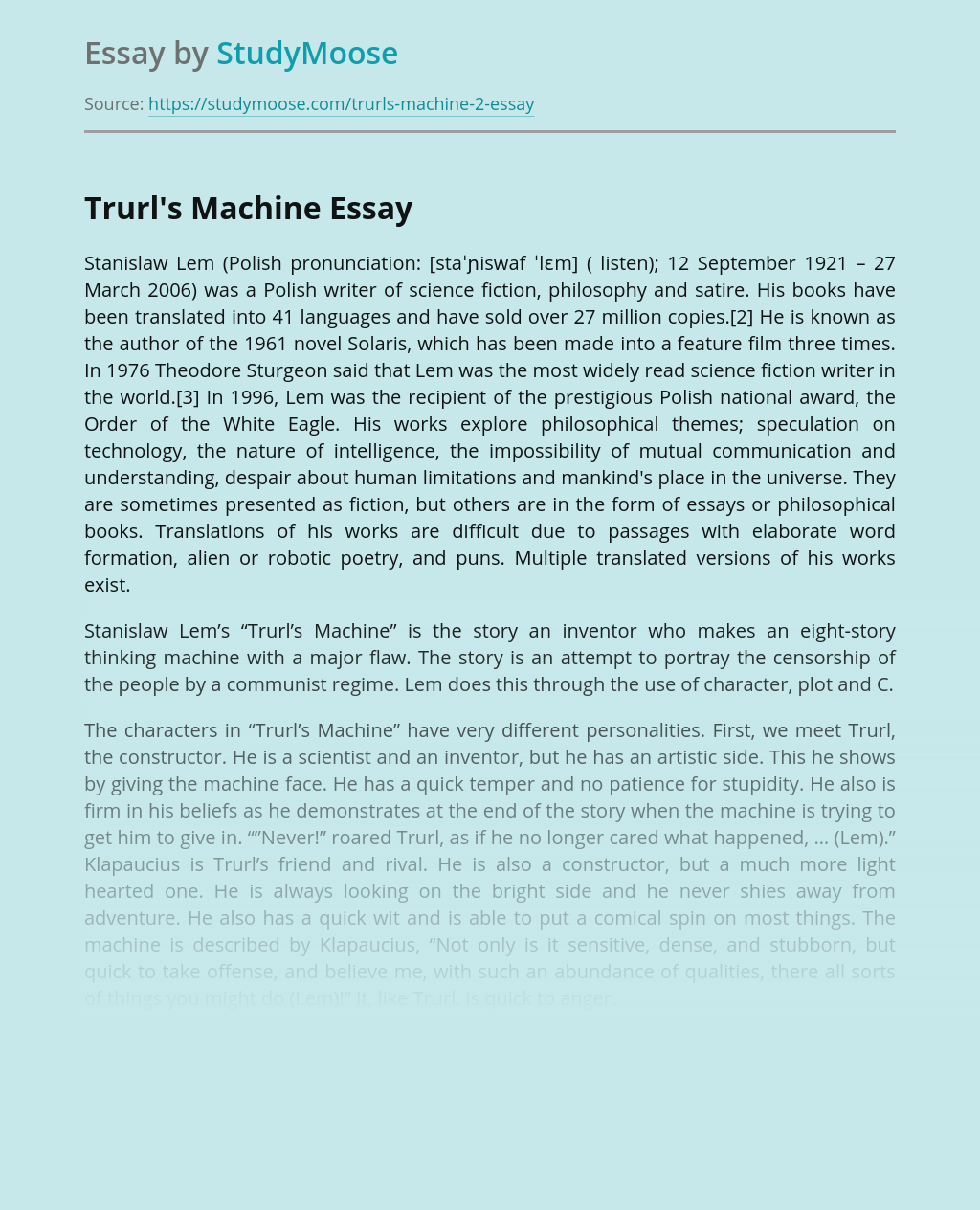 A. Defining Democracy 1. Democracy is a means of selecting policymakers and of organizing government so that policy reflects citizens’ preferences. B. Traditional Democratic Theory 1. Equality in voting 2. Effective participation 3. Enlightened understanding 4. Citizen control of the agenda 5. Inclusion 6. Democracies must practice majority rule and preserve minority rights. 7. The...

George Orwells 1984 is among the most important pieces of political fiction; it is an ageless political satire that demands to be checked out to be truly valued. Published in 1948, and set 36 years into the future, 1984 strangely illustrates where the world is going, where the truth is shunted and lies are promoted...

The Tsar was not in serious Jeopardy in 1905 Throughout his time as Tsar, Nicholas II was faced with constant threats due to terrorist groups such as the peoples will. Many of these groups were oppressed by ‘The reaction’ that began under the reign of Alexander III, however not all opposition was destroyed. This meant...

Academic Strategies for the Business Professional

Personalities of The Cold War

Who caused the cold war? Focus; the role of each personality in contributing to the cold warTime frame: 1945 to 1952Cold war- period of intense tension and mistrust, leading to competition and confrontations. Stand: both Stalin and Truman contributed to the cold war. Don't use plagiarized sources. Get Your Custom Essay on Trurl’s Machine Just...