Abstract:Machine learning is a branch of artificial intelligence that employs a variety of statistical,probabilistic and optimization techniques that allows computers to learn from past examplesand to detect hard-to-discern patterns from large, noisy or complex data sets. This capability isparticularly well-suited for medical applications, especially those that depend on complexproteomic and genomic measurements. As a result, machine learning is frequently used indiagnosis and detection of many diseases.The health care industry collects a huge amount of data which is neither properly analyzed; norput to an optimum use.

Don't use plagiarized sources. Get your custom essay on
“ AbstractMachine learning is a branch of artificial intelligence that employs a variety ”
Get custom paper
NEW! smart matching with writer

Discovery of these hidden patterns and relationships often goesunexplored. This research focuses on this aspect of Medical diagnosis by learning patternsthrough the collected data of various diseases and to develop intelligent medical decisionsupport systems to help the physicians. Here I will explore various machine learning techniqueswhich will help in better diagnosis in health care.Keywords: Machine learning, risk, prediction, diagnosis, detection, Medical diagnosis, C4.5algorithm and, ID3 algorithm.Introduction:Machine learning is a branch of artificial intelligence research that employs a variety ofstatistical, probabilistic and optimization tools to learn from past examples and to utilize thatknowledge to classify new data, identify new patterns or predict novel trends.

Machine learning,like statistics, is used to analyze and interpret absolutely. However, unlike statistics, machinelearning methods employs Boolean logic (AND, OR, NOT), absolute conditionality (IF, THEN,ELSE), conditional probabilities (the probability of X given Y) and unconventional optimizationstrategies to model data or classify patterns. These latter methods actually resemble theapproaches humans typically use to learn and classify.

AbstractMachine learning is a branch of artificial intelligence that employs a variety. (2019, Aug 20). Retrieved from https://studymoose.com/abstractmachine-learning-is-a-branch-of-artificial-intelligence-that-employs-a-variety-essay 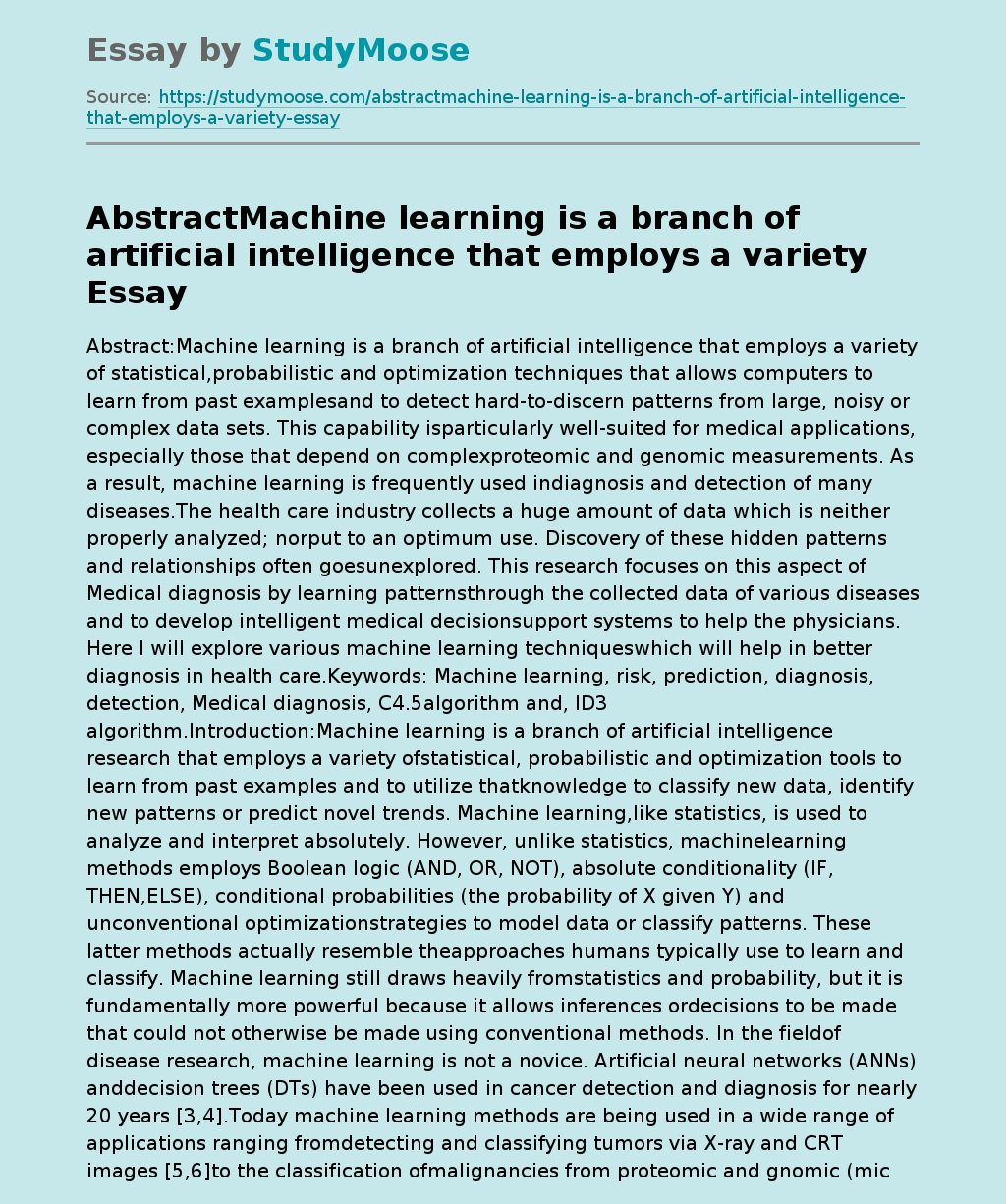