Very few superhero films are able to have a continuous storyline that have spanned out for years. Marvel Comics is one of the few who have been able to have its own universe surrounding the stories of multiple heroes. It reels in the audience with the action-packed adventures and they stay for the story and relatable characters. Those two of which fit the criteria that keep movies such as Marvel Comics around for so long. Some other criteria that have made this possible is the character’s back story, the authenticity and individuality each character has, the fan’s involvement with the characters, and lastly the ending will keep the audience coming back for more.

One film that has all six of the criteria would be the twenty-second film in the Marvel Cinematic Universe: Avengers: Endgame.

Avengers: Endgame consists of the original Avengers from the 1980s comic including Iron Man/ Tony Stark, who is currently played by Robert Downey Jr, the Incredible Hulk/ Bruce Banner, played by Mark Ruffalo and Thor, played by Chris Hemsworth.

Proficient in: Comics and animation

It also includes more members from later issues like Captain America/ Steve Rogers, played by Chris Evans, Black Widow/ Natasha Romanoff, played by Scarlett Johansson and Hawkeye/ Clint Barton, played by Jeremy Renner. (imbd.com) The six are the constant characters in the Avengers series who assemble to fight and save the world. The majority have their own individual films showcasing their beginnings and what made them the superhero fans know today. It is the humble beginning of these superheroes that appeal to the audience.

First, Avengers: Endgame fits the criteria of the characters have well-developed backstories because for over a decade the stories of how these heroes came to be are still referenced in the film. For example, Steve Rogers the first Avenger was a World War II soldier who was chosen for the army’s super-soldier program and was given an experimental serum that enhanced all his human traits. Before the serum, he was a short, skinny and weak man with many medical conditions that kept him from enlisting in the army, but that did not stop him. When he would get beat up for standing up for what is right, he would take all the hits and get right back up. (Captain America) He is not one to let anything take him down because he knows that whatever cause he is fighting for deserves his all. It is admirable, patriotic, it embodies the courage and bravery people need to see in a hero, any hero for that matter.

In addition to the characters’ back story, the heroes are also given real-life human problems to make them more authentic. According to scholar Tim DeForest, he states,  “[Stan] Lee and [Jack] Kirby attempted to make their comic book characters more original by allowing them to interact with each other in a realistic fashion, including heroes often fighting or arguing with each other”(DeForest). An example of this would be the difference in leadership that both Steve Rogers and Tony Stark exhibit when they meet each other. They disagree on how to lead the team, which in one of the previous films showcased the leaders splitting into teams and fighting each other causing quite the destruction. At the beginning of Endgame, the audience is shown the tension between the two to show how even after many years they both still do not agree. (Avengers: Endgame, 00:11:00-00:12:19) This scenario, although not exact, is relatable to fans who participate in sport teams, group projects, and other groups and have all exhibit the same reactions to each other as the characters in the films.

Following the authenticity of the characters, it has made it easy for fans to be highly involved and invested in these superheroes. With twenty-two films in the Marvel Cinematic Universe, it would be unheard of if they didn’t create a giant fan base where fans have invested in merchandise, antiques, etc. These fans have invested over a decade into the stories of these characters. Endgame, the last of the MCU saga, holds a box office record of $1,209.0 million on opening day. (marvel.com) This itself proofs how much fans have waited for the movie to end their favorite saga. David Sims, a writer for The Atlantic says, “[the film] It’s filled with hat-tips and winks to the audience.” (Sims), referring to how within the movie the screenwriters interact with the audience.

Additionally, this film fits also fits the criteria of being appealing to the audience with all the secrecy behind the release of the movie. Avengers: Endgame is probably one of Marvel’s best-kept secret. While filming the movie, the actors, screenwriters, and directors were all instructed to keep every detail of the film a secret from the general public. In interviews with the actors, they would often allude to the film by laughing or changing the subject. Tom Holland, an actor known to accidentally give away details of films he was in, was kept in the dark about the majority of what the scenes were about; so much that after the film was released, Holland realized that in one scene he filmed, he thought they were in a wedding when in reality it was a funeral. The secrecy of the film kept fans on edge because Marvel always has a post-credit scene where it hints at what is to come in the next film. With only those little pieces of information, the fans were kept on their toes for what was to come in Avengers: Endgame.

The final criteria is met by this film because the ending is satisfying. Individual stories of the superheroes are met with an end in the film. Characters such as Tony Stark and Natasha Romanoff die in a way that fans are able to accept. Other characters like Steve Rogers rejoins his initial timeline and lives out his life to pass on the Captain America title to Falcon/ Sam Wilson, his longtime friend. (Avengers: Endgame, 2:44:13-2:48:04) This scene leaves the audience with hope and suggests that the Avengers may still be able to assemble if there ever is a threat to the universe again.

In conclusion, Avengers: Endgame the last film of the Marvel Comics Universe, is a great example of how the franchise Marvel is able to keep such saga going for years. It fits all the criteria making it possible to still be relevant to fans after eleven years. Alexandra Hudson, a research fellow for the American Institute for Economic Research, answers the question of how this film is successful, “There are many reasons, but one important answer lies in the way the films taps into our deep and abiding human desire for stories, which we need to inspire us, to help us understand who we are, and to appreciate our place in the world.” (Tucker) 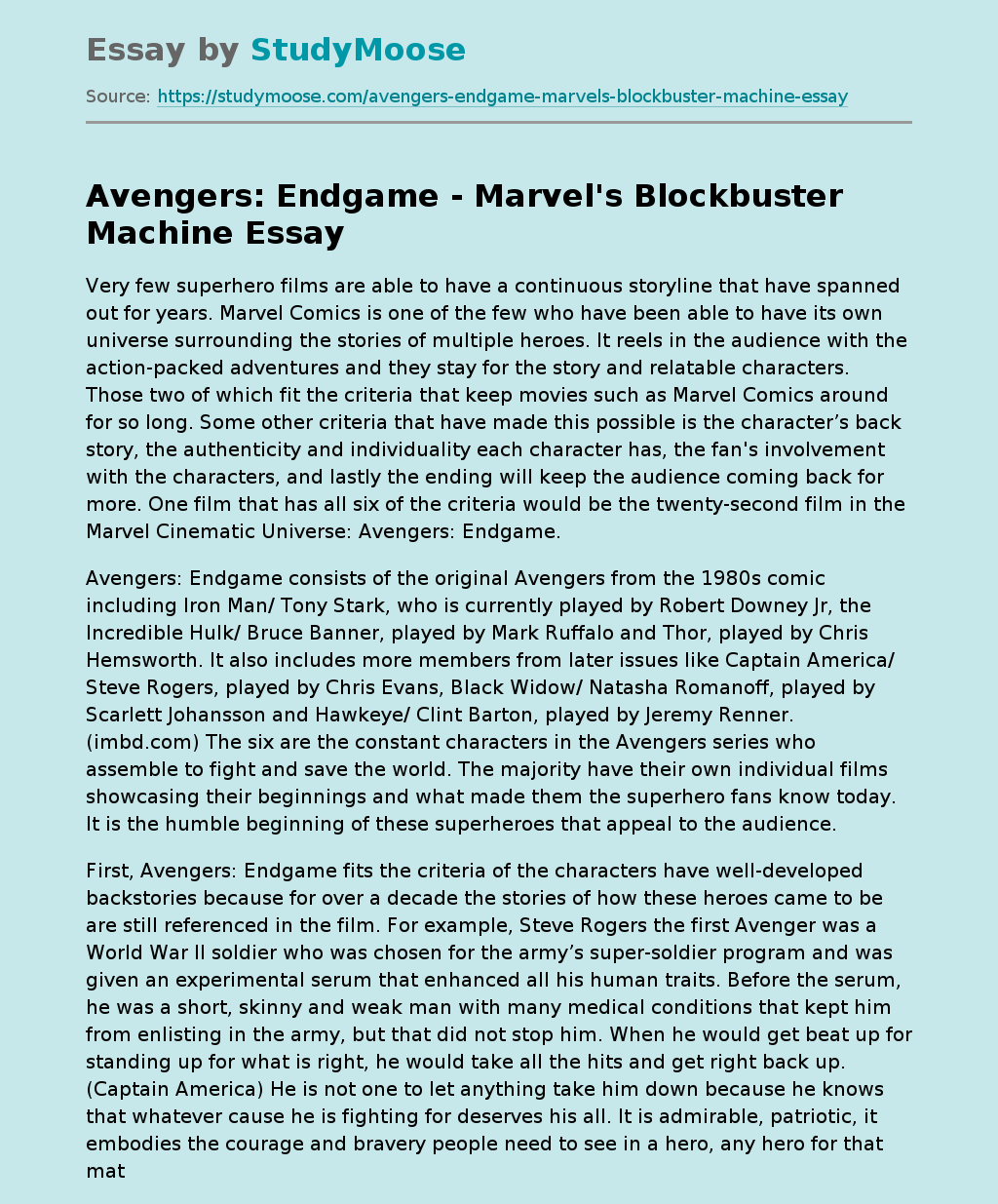