It’s arguably one of the greatest philosophical debates of all time; what does it mean to know? The Tripartite Theory is a model that tries to define individually necessary and jointly sufficient conditions to know a proposition. Edmund Gettier wrote a three page paper that philosophers to this day are still trying to debunk. This essay investigates how Gettier shows that the Tripartite Theory of Knowledge fails, which then leads to a discussion whether the theory can ever be fixed.

Although some philosophers have tried to simply reject the Gettier cases, his counter examples have a great deal of strength and proved he could provide situations in which we lack knowledge, despite all the criteria being met.

It is generally accepted that the three conditions for us to possess knowledge is justified, true, belief. The first condition is belief. We cannot know unless we believe, even if it is true and we have great reasons to think it is true, we will only know it if we believe it.

The second condition is truth. No matter how justified a belief, or how long it is believed, it cannot constitute knowledge if it turns out false. The third condition is justification. Lucky guesses don’t count, we can only know if we have a really good reason to believe. The Tripartite Theory states; subject (s) knows proposition (p) if and only if (i) p is true, (ii) s believes that p and (iii) s’s belief that p is justified.

So in order to have propositional knowledge it actually has to be true, we need to believe it is true and our reasons need to be justified.

In a 1963 paper, Edmund Gettier showed how The Tripartite Theory fails. He explains it is clearly possible for a proposition to be true, but for a person to not actually know. He states ‘First, in that sense of being “justified” in which S’s being justified to believe in P is a necessary condition for S’s knowing that P, it is possible for a person to be justified in believing a proposition which is in fact false.

Second for any proposition P, if S is justified in believing P and entails Q and S deduces Q from P and accepts Q as a result of this deduction, then S is justified in believing Q.’ (Gettier, Edmund L. 1963). For example; I am at the Nelson Speedway track with my husband and we both place bets on a race. After we sit down I make the conjunctive proposition that my husband’s car will win the race and my husband’s cell phone will ring after the race (P). My evidence for P is that I heard the referee tell my husband his car was sure to win as the race has been rigged, also I saw my husband ask a friend to phone him after the race. Proposition P now entrails proposition that the winner of the bet will get a phone call after the race (Q).

I see the entailment from P to Q and now and I accept Q on the grounds of P for which I have strong evidence. I am clearly justified in believing that Q is true. But, to my surprise, I win the bet and my cell phone rings. As it turns out, the driver of my husband’s car crashed on the first lap and his cell phone got a flat battery so his friend was unable to reach him directly.

Now proposition Q is true, but proposition P from which I concluded Q is false. Gettier was right; Q was true (i), I believed Q was true (ii) and I was justified in believing Q was true (iii) but I did not know that Q was true. Since Gettier’s paper explained how the Tripartite Theory of Knowledge failed against his examples, some philosophers have tried to defend the Tripartite Theory by adding another condition. I will discuss Alvin Goldman’s proposed fourth condition; that nothing can be known which is inferred from a false belief, or from a group of beliefs of which one is false.

Goldman offered his Causal Theory of Knowing and explains one can gain knowledge though casual chains by connecting facts and beliefs through perception and memory. He describes a casual chain as a sequence of events for which one event in a chain causes the next event and so on. He states ‘We can now formulate the analysis of knowing as follows: S knows that P if and only if the fact that P is casually connected in an “appropriate” way with S’s believing P’ (Alvin I. Goldman.1967).

Perception (1), memory (2), a casual chain (3) and combinations (4) of (1), (2), and (3) was his interpretation of “appropriate” knowledge-producing casual processes. Unfortunately Goldman’s Casual Theory of Knowledge has also been challenged by Gettier style counter examples because the belief in question is connected casually with the truth of the belief and the subject holding the belief can hold onto it luckily. For Example: The earthquakes in Christchurch happen (event 1).

This causes damage to lots of houses closest to the epicentre (event 2). Say 50 years later subject (a) sees the damaged, abandoned homes (event 3) and now believes there was once an earthquake in Christchurch (event 4). Although this is a strong analysis I will now mention a stronger counter example. As before, let’s say the Christchurch earthquakes happen but this time the Christchurch City Council cleans up everything (event 5).

Again, years later, University students (that know nothing of the Christchurch earthquakes) decide to build some houses on the now cleaned up land and re-enact some major earthquakes to test their earthquake-proof inventions (event 6). Later still, a sees all these damaged, abandoned homes the university made and now believes there was once an earthquake. Although event 1 causes event 2 which causes event 5, and event 6 causes event 3 which in turn causes our belief event 4, the missing connection (event 5) does not cause event 6. So does a know the Christchurch Earthquakes actually happened?

Although every theory of knowledge so far has solid counter examples, there is no doubt Gettier rocked the philosophical world when he successfully challenged the Tripartite Theory of Knowledge. Philosophers will continue to argue that Gettier’s cases are not really cases of justified true belief or that Gettier’s cases really are cases of knowledge after all. Perhaps the one thing all philosophers agree on is that definitions shouldn’t be so narrow that they miss something out or too wide that they include something that shouldn’t be included. 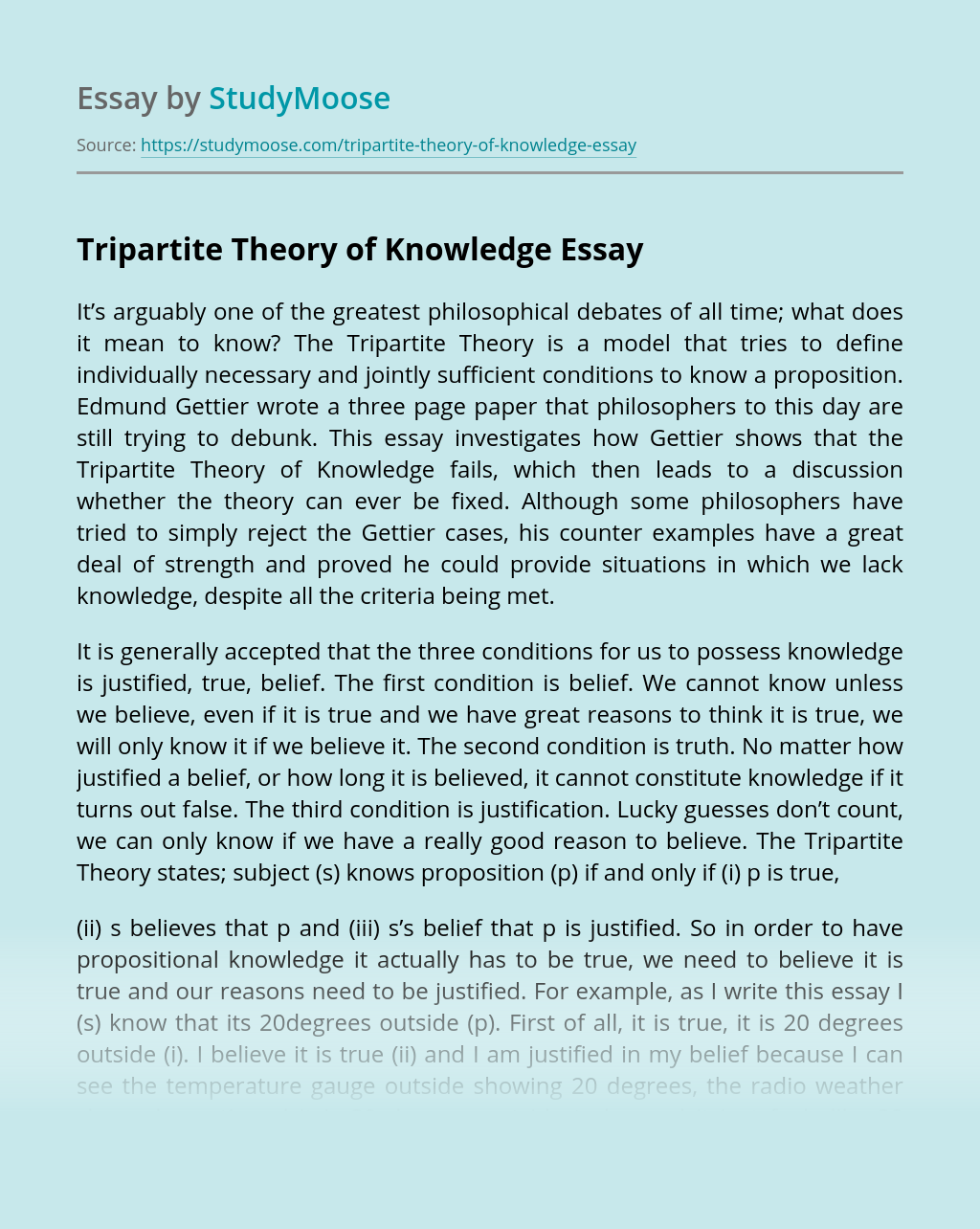 Don’t waste time
Get a verified expert to help you with Tripartite Theory of Knowledge
Hire verified expert
$35.80 for a 2-page paper
Stay Safe, Stay Original