After detailed analysis of all aspects, the hypothesis has been proven true that there is a need to review the logistic structures within Armed Forces and propose dynamic solutions to support their employment in conduct of joint operations in OOAC scenario. Thus there is a need for India to maintain a viable force for likely employment in OOAC scenario and also necessitates seamless logistic support. Thus, it may be debated that an organisation like the OLA of the USA or the OLO of the UK is required at the Services level to coordinate the complex requirements of military logistics.

Don't use plagiarized sources. Get your custom essay on
“ Transportation and Logistic Structures Within Armed Forces ”
Get custom paper
NEW! smart matching with writer

Even at the national level also, there is a requirement of a unified body to coordinate defence and civil logistics needs and infrastructure. However, considering the scope of this research, a suggested logistics structure to support future employment of forces in OOAC scenario is discussed in this chapter.

Though there will always be comparisons between logistics models followed by military forces of the developed countries like China, US or UK and/ or by multinational companies/ agencies vis-a-vis the system followed by our defence forces, the requirement is thus to streamline logistics organizations to suit its overseas employability.

The force structure and its duration of employment in OOAC would be governed by likely task, relation with host country, existing threat, geo-politics, global dynamics and many other factors. Logistics support for such a force should thus be able to provide adequate freedom of action necessary to meet mission objectives. This could be achieved by integrating all logistics capabilities within the operational space, thus bridging the strategic sustainment base of our Nation to the complex tactical environment in a way that optimises logistics readiness.

What We Need: ‘Permanent’ or ‘Task Oriented’

The delivery of efficient logistic support during any military operation is always of paramount importance, however considering that the employment of forces in an OOAC scenario would be in a quicker time frame early inefficiencies are thus inevitable. To achieve a seamless and efficient logistic support there is a need for exploiting economies in operational logistic processes. By merely making the materials and services available would not solve the purpose; the requisite knowledge and experience at staff level would also contribute signi6cantly towards logistic efficiency.

Possible Scenarios. The fact remains that in case of any employment of Indian Forces in an OOAC scenario, it would be a joint and integrated venture of min two of the three services, suitably controlled at the Headquarters of Integrated Defence Staff. In addition the force level may be upto a division or division plus, likely to be employed in an incremental manner. However this would largely depend upon threat, national interest, host nation at home commitments and many other factors. Thus, in order to build up an argument for a logistic structure, aptly suiting operations in OOAC, the employment of forces in any of the following possible scenarios is applicable:-

Considering the above, what is the possible solution for a logistical structure that could suit any of the scenarios? The desired logistical efficiency can be achieved in any of the following manner:

In our context, a “Quasi-Permanent Logistic Structure” comprising a mix of the above two, duly calibrated, to meet our requirements, would be more prudent. The suggested model and its accrued advantages are discussed in succeeding paragraphs.

A Quasi-Permanent structure must have an inherent capability to detach as well as attach various adhoc modules. This would not only provide optimum flexibility and economy of effort but also be capable of carrying out the required logistic support based upon the envisaged task, commensurate to force level applied this structure should be ideally effective to support operational level and facilitate the Services which in turn should cater for respective logistics requirement at tactical level.

Pre-Requisites. Certain pre-requisite that are required to be met in order to facilitate a functionally robust model are as follows:

The suggested model encompasses the following:

The ‘Quasi-Permanent Logistic Structure should be tailored, so as to enable seamless planning and execution of joint operations. The advantages accrued would be manifold, however a few are discussed as follows:

Due to the necessary prerequisites of establishing a system capable of providing logistic support for OOAC scenario, a fully integrated logistics may not be feasible in a short duration and thus may not be a near term solution. However, in the interim, a ‘Quasi Permanent Logistic Structure’ would be more desirable. The existing conditions, futuristic Mission Based Deployments (MBD) of forces and their imperatives of operational requirements, coupled with experience of other countries are a fair indication to suggest a system where resources may be optimally shared or in other words ‘Joint Logistics’. 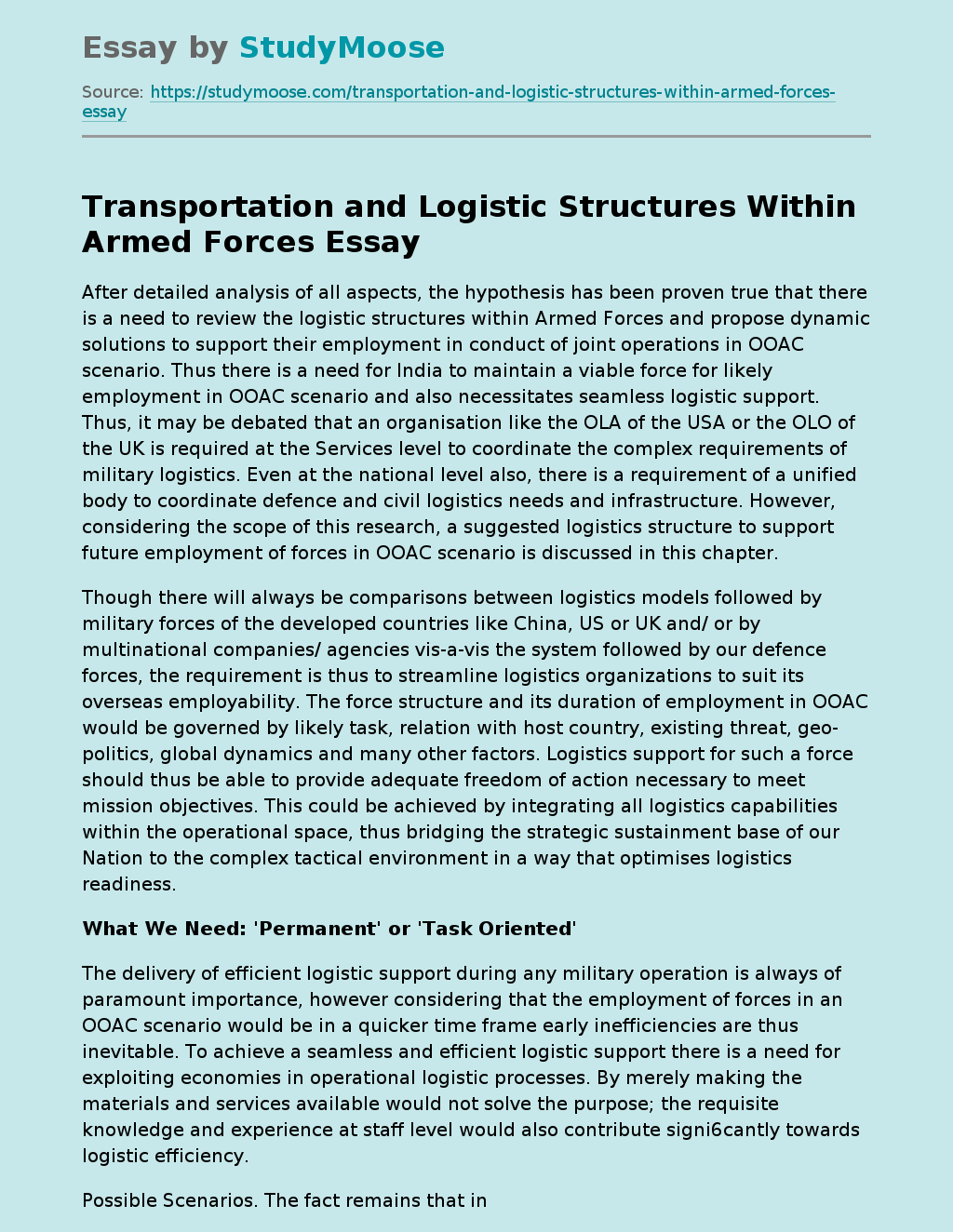