We use the word role today meaning a function or part played in life. As a member of a family or a work situation the roles we have in life depend on the situation we are in at the time. I myself am a wife, a mother, a daughter, a care assistant, a student and a friend. As you can see I have many different roles in my everyday living. The main role in my life will be the role within my family unit.

This project will look at the roles of members in a family unit and how this has changed over the last 25-50 years.

The roles within the nuclear family used to be the father being the main provider and working long hours to support his family and the mother looked after the children and the home. Because men were the ones with the money they took charge inside the family. This was considered the norm but over time changes came about when the wife began to reject the housewife role and demanded a greater say in decision making in the home.

They wanted to be considered equal to their husbands. Women began insisting men carried out tasks around the home. This lead to husbands spending leisure time with family instead of spending time with his male companions down the pub after work, it resulted in close emotional bonds with his wife and children, he began to help with household tasks and childcare.

With the introduction of the contraceptive pill in the 1960’s women were able to limit the number of children they had and gave them the freedom to obtain paid employment.

A marriage now became a partnership with the husband and wife now sharing the routine of everyday life. Attitudes changed in society, it was now considered normal for husbands and wives to both work and share household tasks and childcare.

In today’s society it is not unusual for the wife to be the main provider and the husband stay at home to keep house and look after the children. The term househusband is now well known.

There are three different roles:

Joint roles; where couples work together in the house or garden.

Complementary roles: where couples helped one another such as one may paint the other may paper.

Segregated roles; where couples have separate jobs to do, e.g. the wife does the ironing the husband mows the lawn.

The role of members in the extended family did not vary greatly from those of the nuclear family. The daughter settled in close proximity to her mother and they saw each other on a daily basis. This gave the grandmother the opportunity of a supporting role in the upbringing and education of the child(ren). They were also if able to give financial support. The extended family members usually took on the role of caring for an elderly parent.

A person is now expected to live well into their 70th or 80th year, this means there has been a huge growth in the number of three-generation families.

Nursing homes and residential homes are now on the increase in today’s society and the role of looking after a parent in their old age within the family unit has now decreased.

The roles within the extended family have varied greatly due to women and men now having equal opportunities and both going out to work. The care of the child while the parents work is more often than not taken on by a family member e.g. grandparent aunt or uncle. Whilst the local extended family takes on the role of childcare it is both the parents responsibility to take on the role of providing for their family.

Reconstituted families became more popular after the divorce reform act of 1971 was introduced making it easier to obtain divorce.

The roles within the reconstituted families can be very difficult due to stepparents taking on their new role and children rebelling against the discipline given out by a stepparent.

In reconstituted families both the man and the woman take on the role of the living expenses and food costs of the home. Joint financing of the stepchildren’s expenses is less common, it is much more common for the mother to receive financial help from the stepfather in order for her children’s expenses.

Both parents along with household tasks usually take on the role of childcare and educator. Members of the extended reconstituted family also take on the childcare role when both parents work.

The role of the single parent can be a difficult one, as they have to take on the role of mother, father, carer, provider and educator. This itself can become a huge task especially if there is no immediate family around to offer support

Single parents have become more popular in today’s society for a variety of reasons.

There are more women than men who take on the role of the single parent but it is probably a harder role for a man to cope with. A mans role in life is seen to be masculine; they define themselves by their work role. Single fatherhood requires men to look at their priorities around work and family and so their role in life now becomes the sole provider for his child(ren).

There are many types of families in today’s society including gay and lesbian couples. The public’s opinion of these couples has changed enormously over the last few years.

The role of carer and educator within this type of family usually falls on both individuals. Benefit such as income support or working families tax credit is paid to the natural parent of the child and does not include the other persons income, as the law does not recognise them as a couple, therefore the main provider will probably be the natural parent but not in all cases.

There are many people from many cultures settled in Britain today. Being of a different cultural background has resulted in prejudice. Prejudice still exists today, and although there is discrimination out there, it is against the law and much harder to prove. Because of so many cultures in our lives we have seen many changes in society, namely the opening of shops, supermarkets, take-away food shops and restaurants. Many years ago it was unusual for families to eat outside their home or the home of a family member, today take-away food and eating out is a part of every day life. We now have new tastes ranging from Chinese to Indian and Italian to Mexican.

Why roles have changed

Many changes have taken place over the years especially the roles within family life. The introduction of the pill made it easier for women to take control of their bodies resulting in fewer children being born. The influences that have changed the way we think the way we see the family and the roles we play are due to the media, television newspapers and magazines.

Legislation has given us equal pay, equal opportunities for all and equal rights regardless of our class gender or culture.

Women can now own or rent their own home and are considered equal owners in the case of divorce.

Women can now take out loans or credit agreements without their husband or fathers consent.

Health care has improved considerably over the years and screenings for women’s problems has been forced into action.

Overall life has become better for women today. They now have the same rights as men and are considered an important part of our society today. 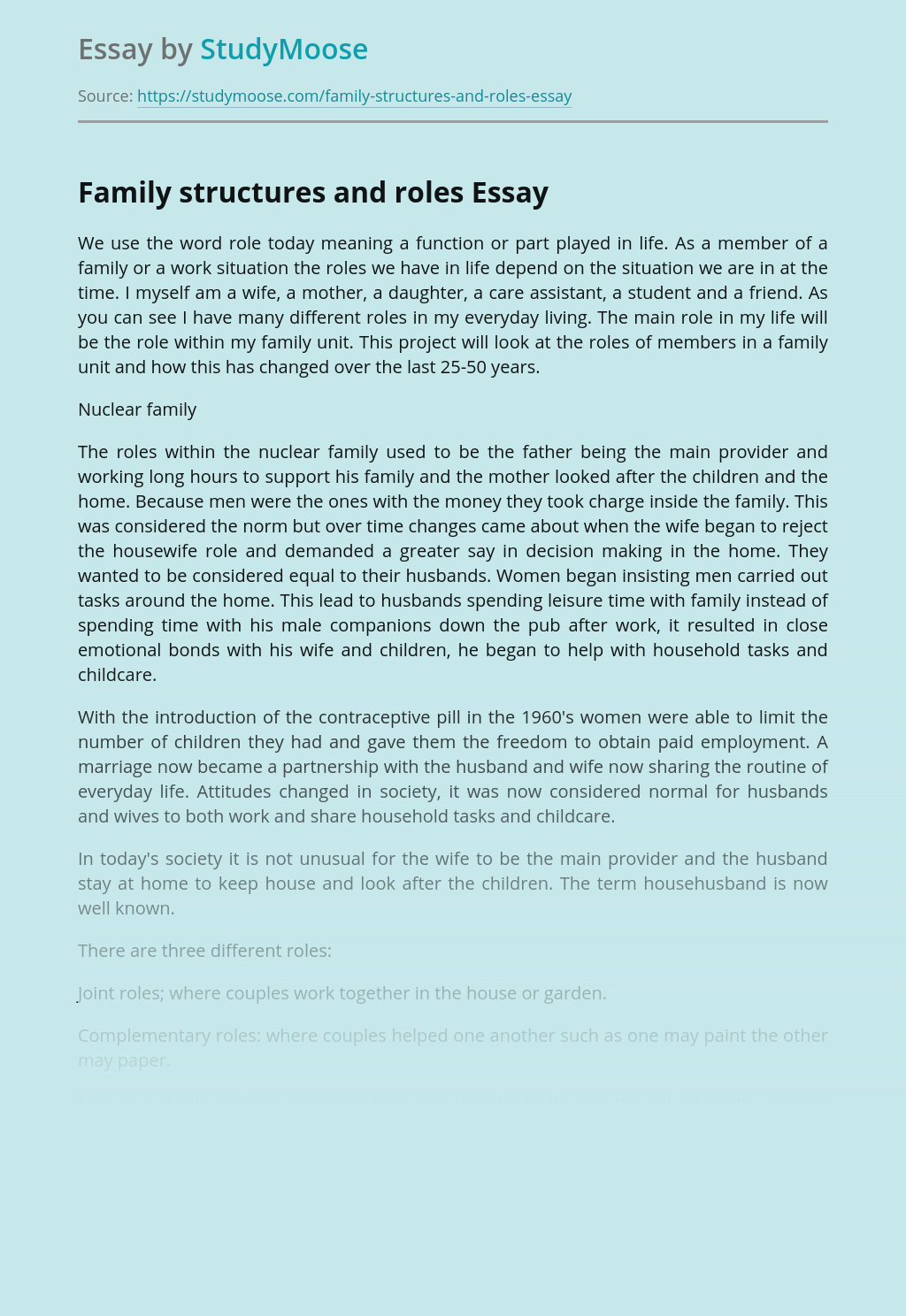 Don’t waste time
Get a verified expert to help you with Family structures and roles
Hire verified expert
$35.80 for a 2-page paper
Stay Safe, Stay Original