'Frankenstein' is an example of dark gothic horror

‘Frankenstein’ is a classic example of dark gothic horror. The novel has great depth and the multitudes of subtly hidden messages woven intricately into the storyline are confirmation of Mary Shelley’s brilliance. She raises several important issues within the novel, ranging from the dangers of ambition and obsession, to the cruel way that society judges and condemns people that do not fit in. The morality of science is also discussed, a particularly sensitive topic in today’s world of fast advancing technology and genetic engineering.

Don't use plagiarized sources. Get your custom essay on
“ ‘Frankenstein’ is an example of dark gothic horror ”
Get custom paper
NEW! smart matching with writer

Frankenstein is not the only narrator

She conveys these messages through the voices of the characters in the novel, however, Frankenstein is not the only narrator and his is not the only message. The novel opens with letters from Robert Walton to his sister. He aspires to reaching the North Pole, despite fears that this will endanger many lives, including his own. His ambition is very similar to Frankenstein’s in that it appears to be uncontrollable and fraught with danger and interestingly, both of their obsessions start with a ‘thirst for knowledge’ and lead them to ‘inuring my [their] body[ies] to hardship’.

The parallels that can be drawn between the two characters create a curiosity in the reader as we realise that if Walton does not ‘seek happiness in tranquillity and avoid ambition’ as ‘his friend,’ Frankenstein advises, his explorations could end in destruction and ruin. Frankenstein even acknowledges the mental similarity of the pair when he recognizes that Walton is exposing himself ‘to the same dangers that have rendered me [Frankenstein] what I am.

‘ The character of Walton allows Shelley to implant an additional perspective on her central theme, which is essentially that obsession can be destructive.

This extra narrative layer gives the novel greater depth and emphasises the message to the reader. It is clear throughout the novel that Shelley has a very feminist attitude. Without exception, the female characters in the book are portrayed as noble, selfless, kind, caring and these are qualities that are lacking in many of the males representatives. One of the first female figures that we meet is Frankenstein’s mother, who generously fosters the orphaned Elizabeth and tends to the sick, even though this leads to her own death.

Even ‘on her deathbed the fortitude and benignity of this best of women did not desert her,’ and the way she resigns herself ‘cheerfully to death,’ evokes feelings of admiration in the reader. Elizabeth is described as ‘a pictured cherub,’ ‘beautiful and adored. ‘ This superficial portrayal might have made Elizabeth seem beautiful yet aloof, lovely yet vacant. However her noble defence of Justine when it seems she will ‘perish through the cowardice of her pretended friends,’ shows the reader that Elizabeth has both courage and conviction and earns our respect.

Justine is indirectly the monsters second victim and Shelley prepares the reader for her condemnation in a letter from Elizabeth to Victor in which Justine is described as ‘frank hearted and happy. ‘ This makes her death seem tragic and wasteful, as she is the second innocent to die because of Victor’s mistakes. It is a letter from Elizabeth that triggers Frankenstein’s ‘convalescence,’ after the creation of the monster and throughout the novel his sanity is preserved by his contact with women.

In this way Shelley is presenting the idea that it would benefit society if women were allowed more freedom and control and that given the chance, women can lead misguided males. This is a biased view but works well within the novel and was an important issue at a time when the emancipation of women loomed on the horizon. Shelley presents the monster as ‘grotesque,’ and ‘deformed,’ because this allows her to raise important issues about prejudice and rejection within society. Everybody in the novel except De Lacey, who is blind, rejects the monster.

It is De Lacey’s inability to judge the monster on his appearance that makes him able to accept him based on his words, which persuade the blind man that the monster is ‘sincere. ‘ Here, Shelley is criticising society for its prejudice against those who are different and it is apparent to the reader that ironically, it is only the blind man that can truly see the monster. On beholding the monster, ‘Felix dashed me [the monster] to the ground,’ and hits him. This shows him using violence to deal with something he does not understand and is therefore scared of.

Frankenstein and the monster meet

Another example of this is shown when Frankenstein and the monster meet as Victor resorts to basic, crude language and challenges the monster that he ‘may trample you [the monster] to dust,’ even though he knows he is physically inferior. Shelley highlights the human instinct to combat the unknown with violence and shows that it is harmful to society, as had the monster been accepted, he would not have turned to murder and revenge. Shelley also challenges Catholicism in the novel as Justine is forced to ‘confess a lie,’ after being threatened with eternal damnation in hell.

The idea of confession and redemption is particularly prominent in the catholic religion and in this section Shelley seems to be criticising the notion that confessing a sin will immediately bring you absolution and the pressure to confess that this puts people under. The strength we see in Justine is destroyed when she exclaims that ‘ever since I was condemned, my confessor has besieged me. ‘ Although Shelley seems to mostly agree with the suggestion of God and salvation, as she embraces the comfort that Justine finds in the idea of heaven, she seems to strongly disagree with the power and supremacy that people can gain in the name of God.

There are many parent and child relationships within the novel that can be seen to raise different issues about childhood and the impact that nurture and care can have. Walton’s dead father forbade him to ’embark in a sea faring life,’ and Frankenstein’s father told his son not to waste his time reading books about ‘fanciful’ ancient philosophers like Cornelius Agrippa, as ‘it is sad trash. ‘ Neither carer took the time and effort needed to explain their decision and so both children not only ignored the ruling, but pursued their passions more fervently.

Shelley conveys to us the message that parental neglect can be costly through the words of Frankenstein, who admits that had his father explained why the books were ‘trash,’ he might never have ‘received that fatal impulse that led to my [Frankenstein’s] ruin. ‘ The death of Frankenstein’s mother first causes Victor to desire a way of sustaining life so that nobody need grieve and in this way, Shelley could be suggesting that an unbalanced childhood can have repercussions in adulthood. This could have some reference to Shelley’s own life as her mother died only 10 days after her birth and she was never truly happy with her stepmother.

The De Lacey family educates the monster indirectly at the same rate that they teach the beautiful Arabian, Safie. However, although he becomes literate and eloquent, he is not taught moral values and the difference between right and wrong because there was ‘no father to watch my [the monsters] infant days. ‘ This means that although he appears intelligent and is able to feel emotion, he is largely incapable of dealing with these emotions appropriately and has little concept of death, two factors which could have lead to his devastating revenge on Victor.

This is significant as Shelley is making the reader aware of the importance of nurture and parental care and making it clear that children respond well to authority, a message that places the blame of the monsters crimes on Victor and evoking sympathy for the monster in the reader. In our modern world, ‘Frankenstein’ can be seen to warn against the dangers of ‘playing God’. Amongst growing fears of genetically modified food and cloning of animals, it is easy to use ‘Frankenstein’ as a hellish and frightening example of humanity exploiting science.

During the formation of the monster, Frankenstein dreams of creating a new species that ‘would bless me as their creator and source,’ but later in the novel destroys his second creation to stop ‘a race of devils… upon the earth. ‘ This perverse image shows the reader that although we may have good intentions, human advances can be dangerous. However, Shelley obviously did not want scientific morality to be a key theme in the book as she only includes a small and understated description of the monsters ‘dull yellow eye open’ and his awakening.

Shelley is a clever and evocative writer and uses the novel ‘Frankenstein’ to raise many issues and convey many messages to her readers. Some of these themes can be seen as controversial, and the way Shelley carefully weaves them into the gothic horror novel makes them more acceptable to the reader. Fundamentally, Shelley is not didactic in her approach but allows the reader to pass their own judgement on the situations and characters that she writes about. This makes her writing more effective as the reader is allowed to become involved in the story further and can empathise with those caught up in the complex web of events.

Essay on Courage • Essay about Hell

'Frankenstein' is an example of dark gothic horror. (2020, Jun 02). Retrieved from https://studymoose.com/tranquillity-avoid-ambition-8142-new-essay 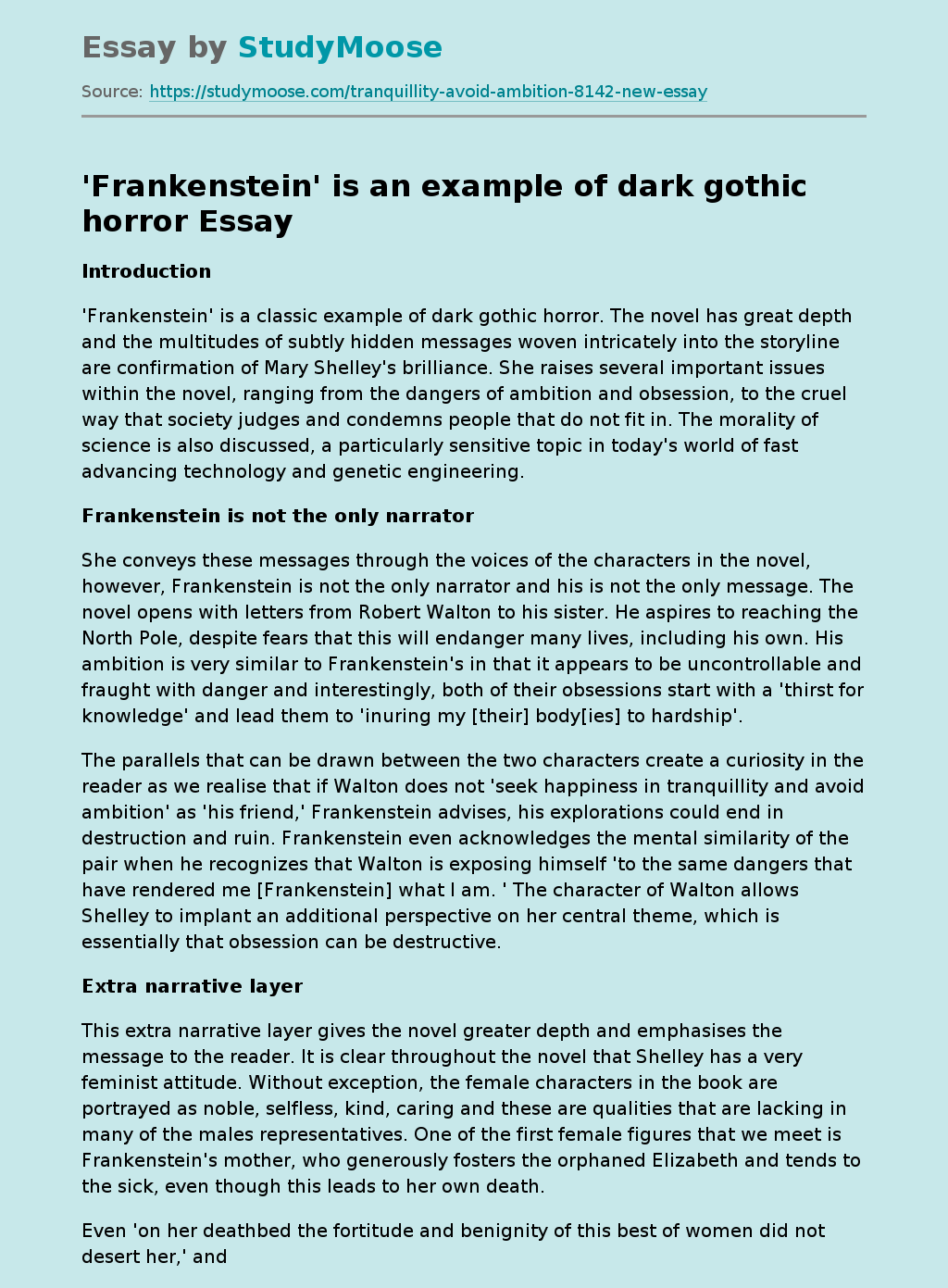