Analyse the presentation of horror in ‘Frankenstein’

To understand how horror is presented within a gothic horror novel we must first understand the aim of such, its purpose, it should “speak to the mysterious fears of our nature, and awaken thrilling horror- one to make the reader dread to turn around.” ‘Frankenstein’ is one of the definitive novels of the Gothic horror of the 18th century. While many of this genre focused on ghosts, ghouls and the paranormal, Mary Shelley focuses on the paranormal, the impossible, and the (at the time) unknown, to evoke a sense of terror and dread.

Don't use plagiarized sources. Get your custom essay on
“ Analyse the presentation of horror in ‘Frankenstein’ ”
Get custom paper
NEW! smart matching with writer

“People fear what they don’t understand and hate what they can’t conquer.”- Andrew Smith.

‘Frankenstein’ creates horror through fear endorsing atmospheres and imagery. “By the glimmer of the half extinguished light… morning, dismal, wet… although drenched by rain which poured from a black comfortless sky.” Darkness is used to create a sense of dread and foreboding, leaving the reader wondering, “What is hidden in the shadows?” This is psychological torment for both the reader and Victor, rather than physical torment.

The weather is used through pathetic fallacy to allude to, or reference things to come, “then, for an instant everything seemed of a pitchy darkness” the weather instantly shifts, to prepare the reader for the appearance of the creature; it also represents the monsters movement “night closed around me… I felt still more gloomily…It was completely dark…I saw the lightening playing on the summit…The storm appeared to approach rapidly…It advanced… I soon felt the rain coming slowly in large drops, but its violence quickly increased.

” The steadily increasing storm represent the monster, moving slowly at first, in darkness towards Victor, as it begins to move closer its anger and want for revenge increased suddenly as lightening. The rain represents the misery that is to come for both of them and its strength emphasizes the tension between the monster and Victor.

The methods Victor used in order to bring the creature to life were very complex and virtually undiscovered at the time. People didn’t understand technology or electricity and so they feared it, not so much electricity in itself, but the things that it could have potentially been made possible with it, Raising the dead, or the creation of new life. The role of electricity is also doppelganger with that of the Prometheus’s heavenly fire. The creation of life in itself is a distinct feature of the gothic horror genre as it involved aspects of life that wasn’t known. The monster was created with a “gigantic stature” of “eight feet”, it had supernatural abilities, “ for another flash discovered him to me hanging among the rocks of the nearly perpendicular ascent of Mont SalÄve.” No human could climb an entire mountain in mere seconds, no human has such strength, which means humans cannot conquer the monster and so it is naturally hated.

The monster strikes such fear as to cripple Victor, to the point where he is “forced to lean against a tree for support.” The language used through moments like these of intense fear and anxiety is broken and fragmented to show tension and to represent the quickened pace of the beating heart. Victor’s fear, aversion and disassociation with the monster drives him to hate the monster, this causes my ambiguous moments throughout the duration of the novel. “One hand was stretched out, seemingly to detain me,” the monster at this point is essentially a baby, victimless, and has no reason to want to harm anyone, however due to Victor’s fear and prejudice of the monster, all based on nothing but appearances, Victor “escapes” the monster and “runs out” ignoring the possibility that it has not been created without hate.

Due to Mary Shelley’s experiences of death and pregnancy the novel seems to suggest her own mental torments about creation, and the horror of birth and development. Mary Shelley lost many of her children, either during pregnancy of days/ weeks after birth, only her fourth baby survived. Shelley may have been using the novel as a way to voice her disgust and unhappiness at how child birth can appear. “I kept my workshop of filthy creation” could be a reference to the womb, the horrible disgust and aguish a mother can feel at such misery.

Horror is presented in a number of ways throughout ‘Frankenstein’; however I feel it is the presentation of man, both physically and mentally that evokes the most horrifying fear. “Every night I was oppressed by a slow fever,” the fever is a representation of evil. Every night Victor loses himself further into isolation; this causes him to gradually go mad. Mary Shelley is show us that what Victor is doing, challenging god, ignoring your superiors, the overturning of power and the rise of individuals, i.e., Mary Shelley is warning of the problems that could be caused and relates to her own life, as just outside the French Revolution was beginning. “My eyes were starting from their sockets…a wildness in my eye… my loud unrestrained, heartless laughter, frightened and astonished him” Man is not just represented as sick, cold and mad in body, but Victor’s psyche shows man as power hungry, un caring and driven towards that they love without a thought to the effects of others. Mary Shelley’s novel is horrific in its bloody images of vaults and charnel houses but its real horror is in the depiction of man as a self-centered ambitious creature who can take life into his own hands.

Analyse the presentation of horror in ‘Frankenstein’. (2020, Jun 01). Retrieved from https://studymoose.com/analyse-presentation-horror-frankenstein-new-essay 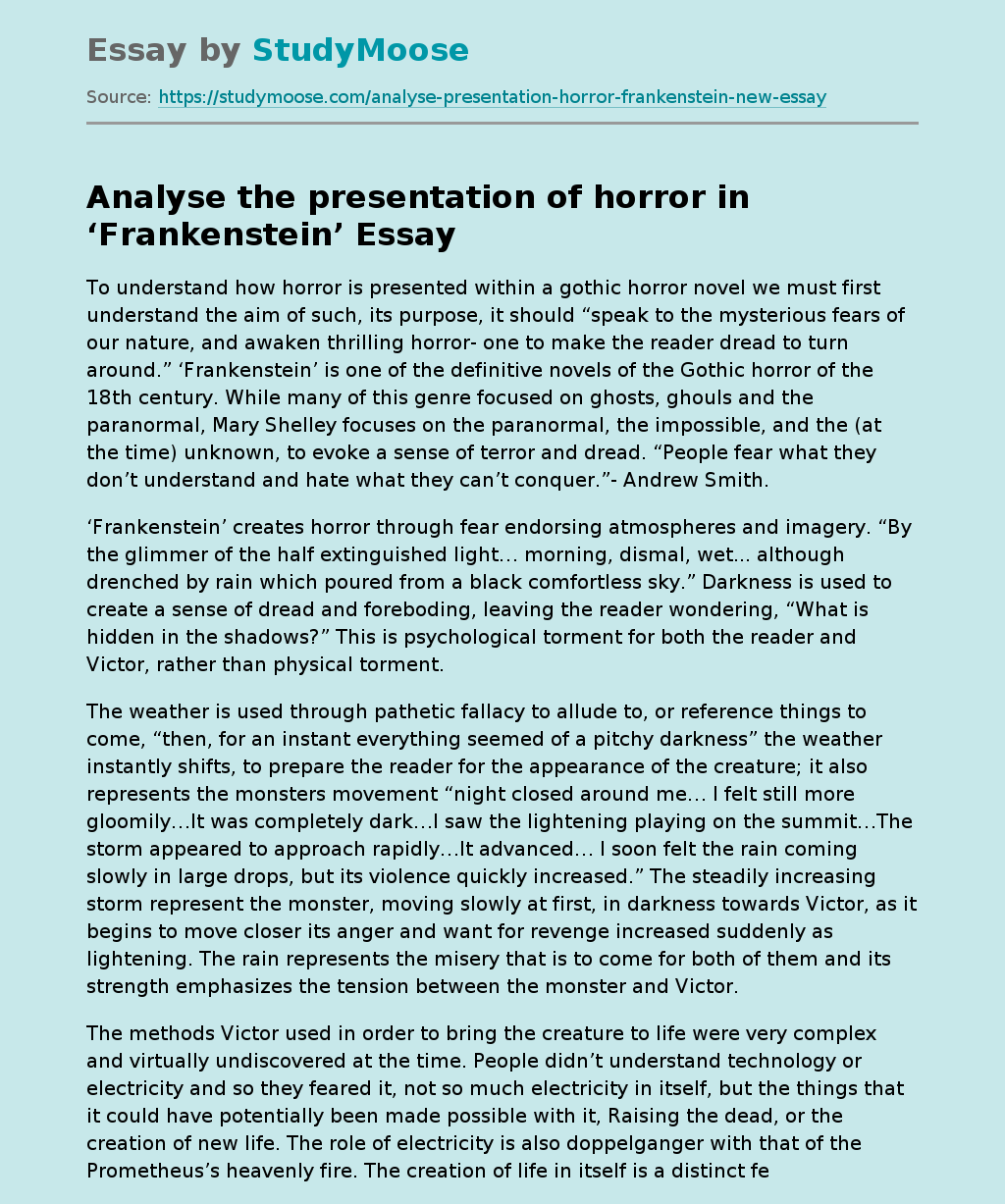