The recent litigation system in the United States shows that there are 10% or fewer cases that go on trial. At the same time, there are 90% of cases that are resolved before the trial by some process of ADR (Alternative Dispute Resolution) (Carver, 2004). Because of less complexity and more flexibility many parties prefer ADR. In United States, the rising popularity of ADR has huge impact on businesses, government and people to avoid problems such as: time, legal fees and expenses.

The similarities to traditional litigation system with the nontraditional forms of ADR are, they both reach to a resolution, but the methods they approach are different.

Don't use plagiarized sources. Get your custom essay on
“ Traditional and Nontraditional Forms of ADR ”
Get custom paper
NEW! smart matching with writer

In a traditional litigation system a complaint is filed with a court and a plaintiff will respond to the complaint in a certain wait period or in the order it was received. On response from plaintiff, each party is allowed to present their case in a pre-trial and further followed by a trial. The final decision will be issued by a judge or a jury based on the evidence from each party.

The most common form of ADR is arbitration. Other forms of ADR are negotiation, mediation, conciliation, mini-trial, fact-finding and using a judicial referee” (Cheeseman, 2010). ADR has different approaches to resolve a dispute. It is believed that negotiation is a simplest form of ADR. Negotiation is a method, when the parties involved in a lawsuit, meet to find an alternative resolution such as compromise or agreeable resolution related to the dispute prior to the trial.

Negotiation is flexible and parties may choose this method before and after filing the lawsuit.

Further it can be applied before other forms of ADR’s are engaged in. Arbitration is a method, when the parties involved in a lawsuit, choose a third party who is impartial and neutral to resolve the dispute. The third party is referred as Arbitrators. Arbitrators can make final decisions. This method is normally used in consumer and employment matters because of employment terms and commercial contracts. Mediation is a method, when the parties involved in the lawsuit agree to have a third party called mediator. The role of a mediator is to make easier settlements.

A mediator can only facilitate settlements but cannot make a decision. Conciliation is a method, when an interested party elects a person called as Conciliator. The role of conciliator is to help the parties in reaching to a resolution who does not want to face each other. Similar to a mediator, a conciliator cannot make decisions. A conciliator schedules meetings, appointments and carries offers for settlement between the parties. In contrast to traditional litigation systems with the nontraditional forms of ADR, it is found that ADR has less formalities and a trial has more formalities.

ADR has a faster resolution process and a trial has a slow resolution process. Normally, it takes 4-5 years to get to a trial (Carver, 2004). The cost with ADR methods is less expensive than to a trial. In case of a trial, it requires certain documents, evidence and testimony, but the same may or may not apply with ADR. The final decision is heard from an arbitrator and in trial a final decision is heard from a jury or a judge. In the end after making the final decision, ADR receives an opinion and trial receives a judgment.

Once the judgment is issued, the trial is enforced to the judgment. In ADR, the opinion can be filed with a court and turned into a judgment but a trial judgment is enforced through a court system. In conclusion, ADR has a creative process in problem solving. The methods established by ADR’s are much effective and well used than the traditional litigation system. ADR provides a viable method of resolving disputes in a satisfactory and cost-effective manner. In this research, it is found that ADR is efficiently reducing the traffic in trial courts and the number of disputes. 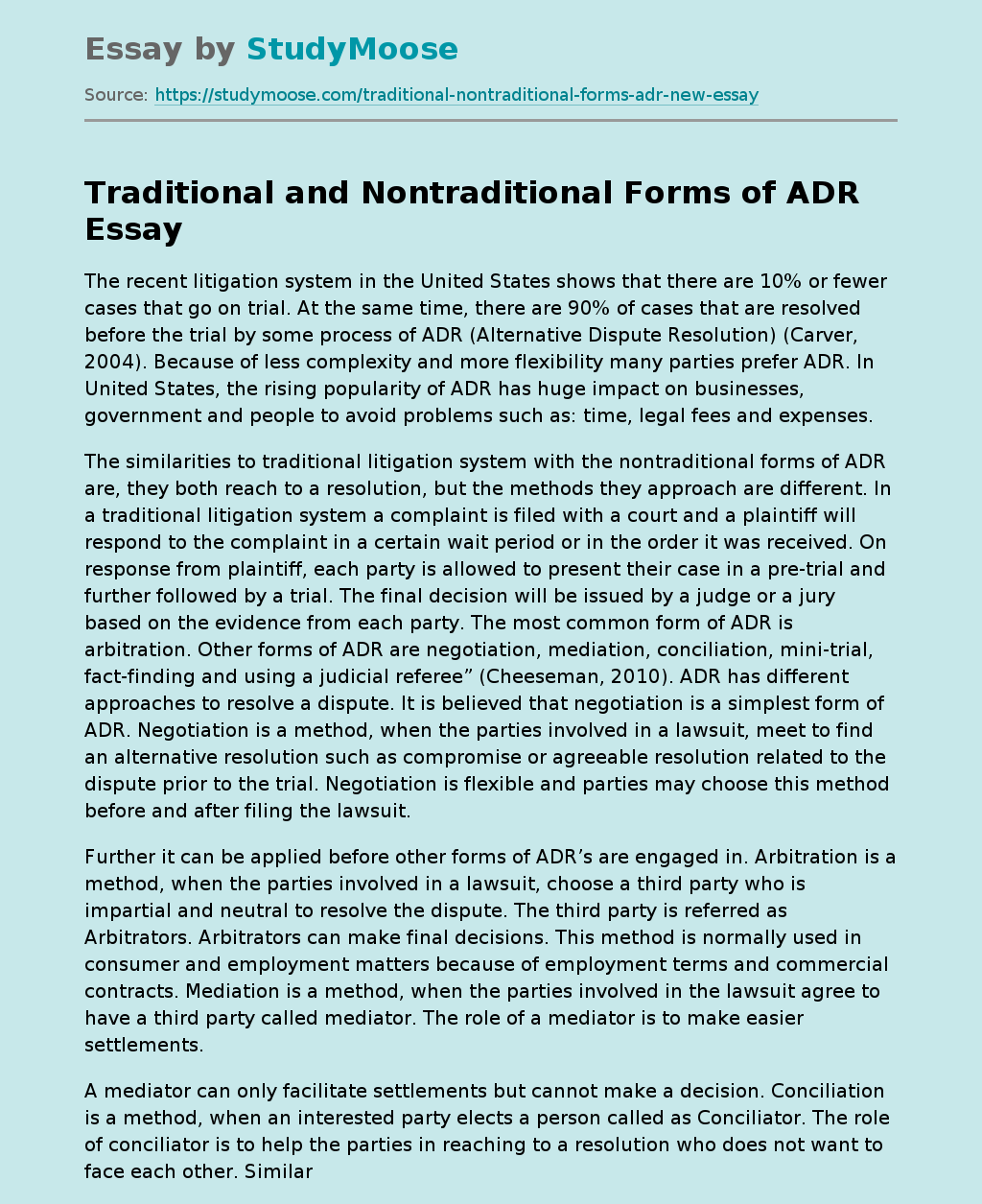