Don't use plagiarized sources.
Get Your Custom Essay on Traditional vs Nontraditional Culture Just from $13,9/Page

A culture is established once a group of people share common beliefs, attitudes, behaviors, symbols, and religion. Cultural beliefs are passed down from one generation to the next. According to “Cross Cultural Psychology” (2012), “Behavior can be strongly influenced through biological tendencies; however, all behavior can be influenced by experience. Culture remains one important factor shaping individual behavior through customized sets of attitudes, beliefs, and values shared by a large population of region (Shiraev & Levy, 2010). ”

Values The values among rural and urban cultures have similarities and differences.

Values are based on “beliefs of a person or social group in which they have an emotional investment (either for or against something)”, according to “Webster” (2012). A pure rural family lives within a much smaller populated area than a pure urban family. Rural families tend to have closer ties to the community because it is a less populated area. Urban families that live in a city have a tendency to spend less time at community functions because they are generally not as close knit.

Rural families rely on the value system passed down to them from their ancestors and they place these values and beliefs high on their importance level. The values of an urban family are not completely different from the rural family, but certain things have priority over others. Urban families have a less predictable lifestyle making it difficult to uphold a standard value system. Urban cultures are primarily based on career, education, and finances; whereas rural cultures focus more on family values.

A study published by Petkovic stated (2007) “When we talk about the distinction of urban and rural culture, we must bear in mind the fact that all classification of culture(s), including the one mentioned, is only justified in theoretical, research and analytical sense, so they need to be accepted as relative and conditional mental constructs. Even more so because in everyday life it is difficult or completely impossible to draw the line which would strictly delineate between the urban and rural culture like two separated or independent empirical entities.

Beliefs Human interactions are normally similar within rural and urban cultures; religious beliefs among the two cultures have their similarities and differences. In the African American urban culture and community a researcher will find a church on just about every corner. The majority of the black urban culture worship services are held on Sunday mornings; most families are together when going to these services. Both cultures have deep rooted faith in God, which actually started from the traditional rural culture (Dillon& Savage, 2006).

The parents of rural and urban cultures do their best to teach their children values, good morals and strong beliefs enabling them to live a God fearing productive life. Dressing to impress is still number one on the comparison list, both cultures really go all out when putting their clothes together for Sunday morning worship. The last but sadly comparisons to be made are the gossiping and classes separation that happens much too often in both religious cultures.

In conclusion of the comparison of African American rural and urban cultures’ religious belief, both cultures love God, are members of a church, and families are mended together through their worship services experiences (Dillon& Savage, 2006). The rural African American cultures are found to be more religious than the urban culture. There are more black southerners living in rural areas that are known to be born- again; these rural southerners are most likely to be protestant since the preferences of denomination vary by ways of region (Dillon& Savage, 2006).

Blacks living in small rural towns see the church as the main focus point for their lives, whereas the urban culture may not center its entire life on the church because of the modernized technology distractions. For the rural culture, their church building is where neighbors socialize, worship and give view points on political issues of the country. The African Americans who live in an urban culture may utilize other venues to socialize; these individuals have social clubs and community centers to discuss issues their country may face (Dillon& Savage, 2006).

Researchers will find that the practice of witch craft or voodoo is more prevalent in rural culture than urban. The urban culture’s religious belief system stems from the rural tradition culture; over time their thinking began to evolve from being controlled by authorities from the past to experiencing life from a nontraditional perspective (Dillon& Savage, 2006). Conclusion As with many cross-cultural examinations, one may witness the similarities and differences of rural versus urban culture in the African American community as a common example of cross-cultural psychology.

The common thread of differences appears to involve the demographics and technologies of the communities. This may be apparent in a variety of similar cross-cultural assessments. On the other hand of differences between the cultures, one may discover the bridge to the cultures’ similarities in their past. When penetrating to the deep roots of two distinct cultures, one may often discover the commonality or shared spirit of the cultures in reference. 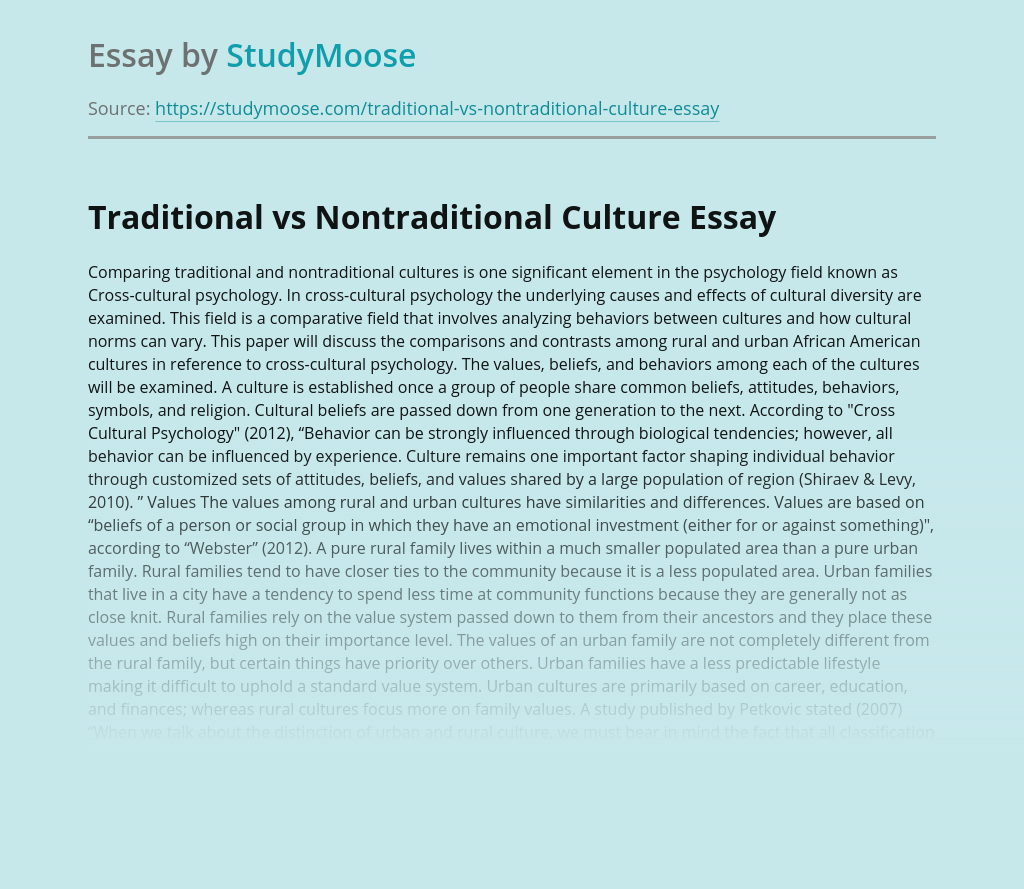 The Jewish Grace Paley was born in 1922 and grew up in the Bronx, New York. Quite dedicated in the civil rights movement she started writing short stories in the fifties. Additionally, Paley was involved in the women’s- and the peace movement. She wrote a number of short stories but got never done a whole...

Rogerian Argument: Does Facebook, Twitter and other social networking websites do more harm than good? Twitter and Facebook are only two of the online connections people use today to stay in contact with friends and family. The internet is a place to interact with new people and a way to be exposed to strangers. The...

Get Essay
Branding as a Tool for Marketing

Once a plant owner spends money to manufacture goods, that money is no longer available for something else. Production facilities, machinery used in the production process and plant workers are all examples of costs. Cost theory offers an approach to understanding the costs of production that allows firms to determine the level of output that...

SWOT Analysis for Classic Savory Strengths: 1. Classic Savory offers different kinds of food that they offering to their customer when looking at the menu. The order of the menu is excellent and arrange accordingly to their categories, a very easy way to recognize the food that a customer would order. Pictures of the food...