Corporation and all other organizational forms

1-1. What is the most important difference between a corporation and all other organizational forms? Owners of a corporation are not liable for obligations the corporation enters into because a corporation is defined as a legal entity separate from its owners.

Don't use plagiarized sources.
Get Your Custom Essay on Corporation and all other organizational forms Just from $13,9/Page

The main disadvantages of an organization are their double taxation of profits/dividends and the separation between ownership and control of the firm.

1-6. You are a shareholder in a C corporation. The corporation earns $2 per share before taxes. Once it has paid taxes it will distribute the rest of its earnings to you as a dividend. The corporate tax rate is 40% and the personal tax rate on (both dividend and non-dividend) income is 30%. How much is left for you after all taxes are paid? Dividend available after corporate taxes: $2 x (1-0.4) = $1.20 Dividend available after personal taxes: $1.20 x (1-0.3) = $0.84 After taxes are paid, a dividend of $0.84 per share is available for distribution.

2-24. Suppose your firm receives a $5 million order on the last day of the year. You fill the order with $2 million worth of inventory. The customer picks up the entire order the same day and pays $1 million upfront in cash; you also issue a bill for the customer to pay the remaining balance of $4 million in 30 days. Suppose your firm’s tax rate is 0% (i.e., ignore taxes). Determine the consequences of this transaction for each of the following:

Corporation and all other organizational forms. (2016, Apr 03). Retrieved from https://studymoose.com/corporation-and-all-other-organizational-forms-essay 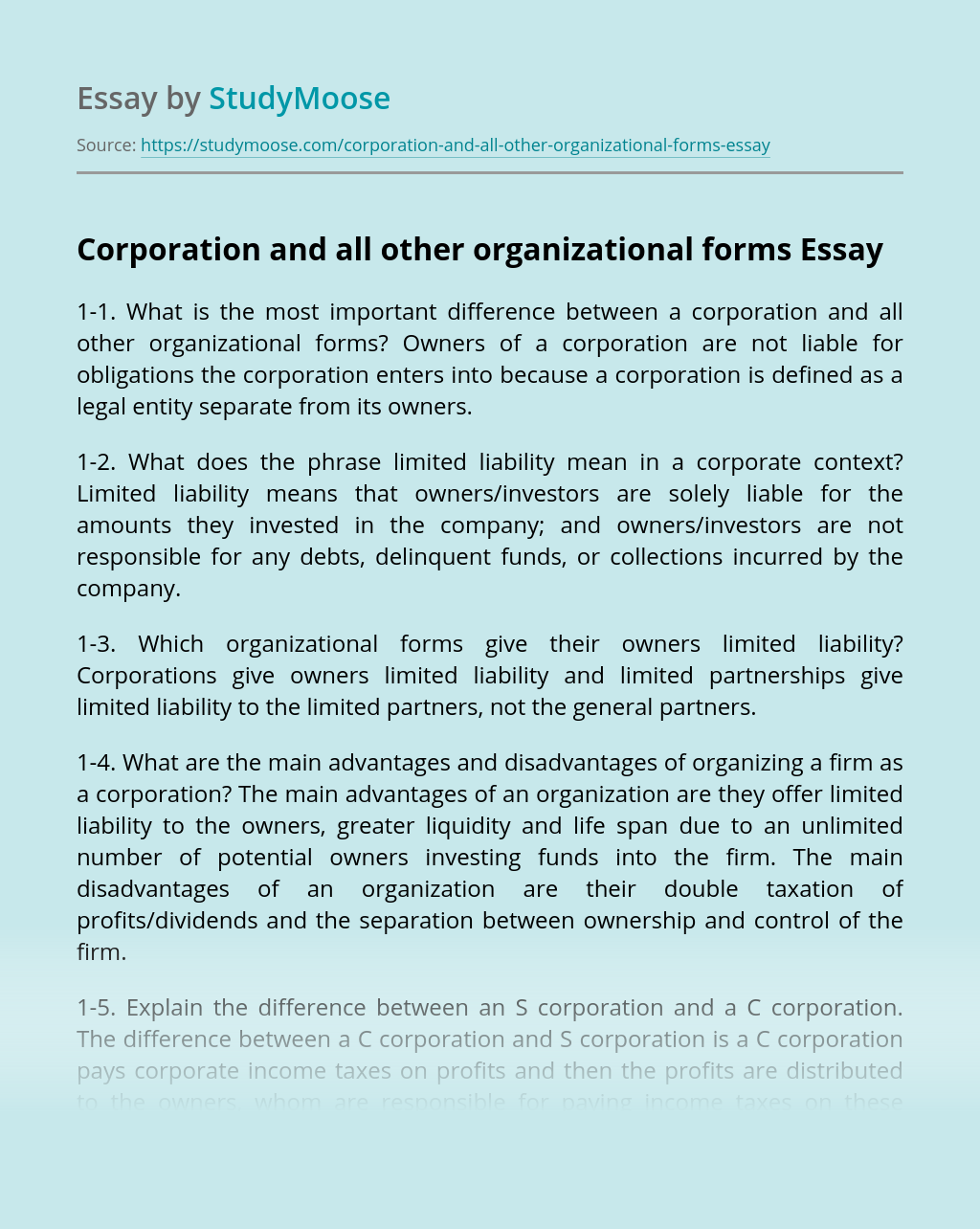 View sample
Industrialization and the Rise of Big Business

From the duration of 1870 to 1900, the United States turned into one of the world’s greatest and growing industrial nations. An industrial revolution that had actually started with the manufacture of cotton and woolen textiles had, by the beginning of the 20th, changed the production of a lot of daily items. Varying from food,...

Occasion management is a part of management research studies that aims to apply science of project management to the organization of functions, celebrations and unique occasions with the objective of effectively performing the entire occasion to attain its function. The corporate and business world has realized the significance of an efficiently conducted business in their...

Description This case starts simple and becomes complex in nature as you get closer to the end of Matthew’s interview. John Baker an Englishman is the chief engineer of the Caribbean Bauxite Corporation of Barracania in the West Indies. Baker is given a task to groom his successor into his position within thirty days of...