Descartes argues that our idea of God is innate, meaning it is something inside us from birth, something that has always been there and will always be there. He believed that everybody has an idea of God being a supremely perfect being, and comes to the conclusion in his argument, that God himself put this idea there, he even said that our idea of God is like “the mark of the craftsman stamped on his work” – us being the work, the mark being our knowledge of God himself.

Don't use plagiarized sources. Get your custom essay on
“ Trademark Argument ”
Get custom paper
NEW! smart matching with writer

For Descartes, the fact that everybody has this innate idea of a supremely perfect God is in itself, proof of his existence; and the fact that this is an a priori argument, makes this argument appealing for all rationalists, as it relies on knowledge, and not sense experience – which Descartes never trusted. The foundation for Descartes argument is the causal adequacy principle, this is the idea that something (for example, A cannot exist unless it is produced or caused by something else that contains formally or eminently everything that is found in A.

Formal reality refers to the basic properties that a thing possesses. However, this alone would cause problems for Descartes argument, because God obviously does not possess all of the properties, of all of the objects on earth, take for example a stone, its properties are hard, round, rough. God is not these things. The way Descartes gets round this is by saying that something say again, a stone, can be caused by something that contains the properties eminently.

To contain something eminently, means for the cause to not necessarily have the same properties as the effect, but to have a greater property.

So God may not possess the qualities of a stone (say hardness) however he possesses a quality greater then this. In other words, the causal adequacy effects means the cause of something can be no less then the effect. Descartes then takes this principle, and believes he can apply it to ideas, in particular the idea of God as a maximally/supremely perfect being, the cause of this idea, must therefore must contain formally or eminently maximum perfection, so therefore the cause of the idea of God must itself be maximally perfect.

There are however, a number of criticisms to this argument, firstly, many philosophers have raised doubts as to whether the causal adequacy principle is actually true to real life, as there are a number of examples in everyday situations where the cause at least appears to be less then the effect, for example, a match causing a roaring bonfire, or a whisper causing an avalanche. Further examples include chaos theory – the idea that a flutter of a butterfly’s wing can cause an earthquake.

If indeed causal adequacy principle isn’t true, Descartes’ whole argument is flawed, as if the cause can be less great then the effect, then Descartes indeed could have created him himself. The second criticism is David Hume’s argument, that you cannot know a cause a priori, but only by experience. He says you cannot determine the cause of something, simply by using reasoning, for example, if a window is broken, you know it must have been something big enough to produce enough force to break it by our past experiences, not by using a priori reasoning.

He concludes that you have to have to have observed the cause and the effect to truly know what happened, and therefore the cause must be in existence. The third criticism questions whether we can actually have an idea of a supremely perfect being, Thomas Aquinas doubts our imaginings of God, because he is too great, and that it is impossible for us to understand some of his qualities, particularly the idea of God being infinite, as it is beyond out understanding to understand what such qualities actually mean, and therefore we don’t have a genuine idea of God.

The forth criticism of Descartes’ argument is that the idea of God is incoherent, there are attributes which appear to be just plain contradictory, for example God is both immanent and transcendent. There is also doubt raised over Gods supposed omnipotence, can he make a rock so heavy that he can’t lift it? It seems either way his omnipotence will be compromised. There is also the problem of evil, if God is all good, omniscient and omnipotent, then why does he allow suffering in the world?

Also, it is put that the idea of omnipotence cannot be divine, as it can be traced back to having historical routes as tribes fought over who had the greatest God, they would start with ‘our God is powerful’ until one tribes got to ‘our God is maximally powerful’ – and therefore cannot be beaten by the other tribe. Descartes would argue that the fact other religions don’t acknowledge one maximally perfect God does not mean the innate idea is not in us, it just means they have chose to ignore it, or haven’t been made aware of it.

He compares it to maths, in the way that we may not have used its truths and laws (i. e. that a triangles interior angles add up to 180) however they are still truths none the less. The last criticism is the empiricists account for the idea of God, that we have experienced attributes such as power, knowledge and goodness in people around them and simply extended them to the idea of God, therefore the cause is less great then the effect, and the idea is not innate.

One thing it has in it’s favor, is that it is an a priori argument, and therefore uses reasoning, something rationalist would find very appealing, it means that if the premise can be accepted that it can give 100% certainty. Overall, I feel Descartes’ argument has too many valid criticisms for it to be considered as a successful argument, and its foundation- casual adequacy principle, is itself flawed, leaving the whole argument to fail. 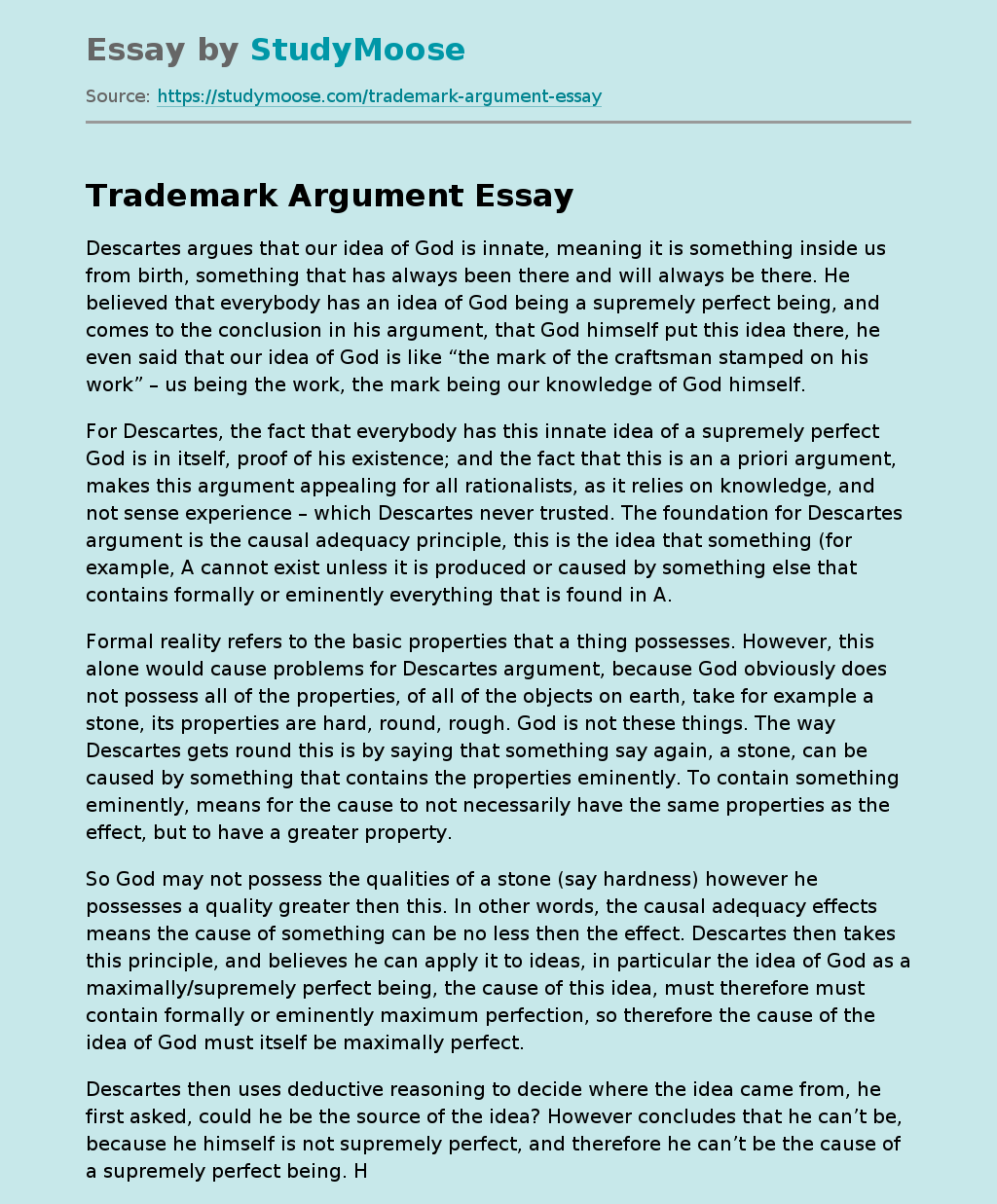