1. How does Toyota’s approach to social responsibility relate to the three concepts of social responsibility described in the text? Profit responsibility: holds that the company has a simple duty: to maximize profits for their owners or stockholders. As mentioned in Toyota case, Toyota started from the year 1930 and has brought huge profits from many brands such as Corolla with 270 million purchased in more than 140 countries. Besides, the company also developed by many activities through many years. Stakeholder responsibility: focuses on the obligations an organization has to those who can affect achievement of its objectives.

In 2010 Toyota’s sales and distribution organization includes 1232 Toyota dealers and 229 Lexus dealers. Societal responsibility: Geek Squad has proved the fact that they are caring about the society by building the respect to others and especially the environment. Moreover, according to Jana Hartline, the value is creating a unique corporate environment.

2. How does Toyota’s view of sustainable mobility contribute to the company’s overall mission? Today, Toyota is the world’s largest automobile manufacturer.

(1) Improve processes and products
(2) Build trust
(3) Empower individuals and teams
Toyota really care about the values of the environment so they have set a five-year environmental action plan in order to gain public attention about what they are doing is to help the environment. They operate the plan within five areas: Energy and climate change

Recycling and Resource Management
Air Quality
Environmental Management
Cooperation with Society
As a matter of fact, we can see that Toyota sets a very clear rules about their sustainable plans so as to contribute the long-term mission. 3. Has Toyota’s National Park project been a success? What indicators suggest that the project has had an impact? Toyota has introduced the national park project in order to attract more partnerships. The national parks partnership offers an opportunity to improve the experiences of visitors through education and hybrid vehicle use (park employees use the donated Toyota vehicles to reduce noise and emissions in the parks). So people can be fully aware the importance of the environment to their life. As is shown in the video case, the major purpose of the national parks partnership program is to make a personal connection with park visitors about Toyota’s hybrid vehicles when they are in a natural setting in which they are receptive to receiving a message about sustainable mobility. The message implies important links: “Green” Vehicles ? Cleaner Air ? Preservation of Parks Research by Toyota indicates that the program is working.

A recent corporate image study indicated that among four leading automakers (Toyota, Honda, Ford, GM), Toyota was rated highest on dimensions such as “Leader in High MPG,” “Leader in Technology Development,” “Environmentally Friendly Vehicles,” and “Wins Environmental Awards. 4. What future activities would you suggest for Toyota as it strives to improve its reputation? In the future, Toyota should keep expanding the eco-friendly plans because as we can see it is working and brings to Toyota a huge reputation in order to develop the company. Toyota should also care more about other people who live in this planet and try to help them out. Because it is true that people who live somewhere in the world may not have a chance to expose to Toyota’s products. When people see the company also spend money on society they can earn a very good reputation. According to the case, the recent concerns about Toyota vehicle product quality that led to the recall of 16 million vehicles have hurt Toyota’s reputation. In the future, all activities, including the partnership strategy and the national parks program, will determine if Toyota can become “the most respected car company in the world.” 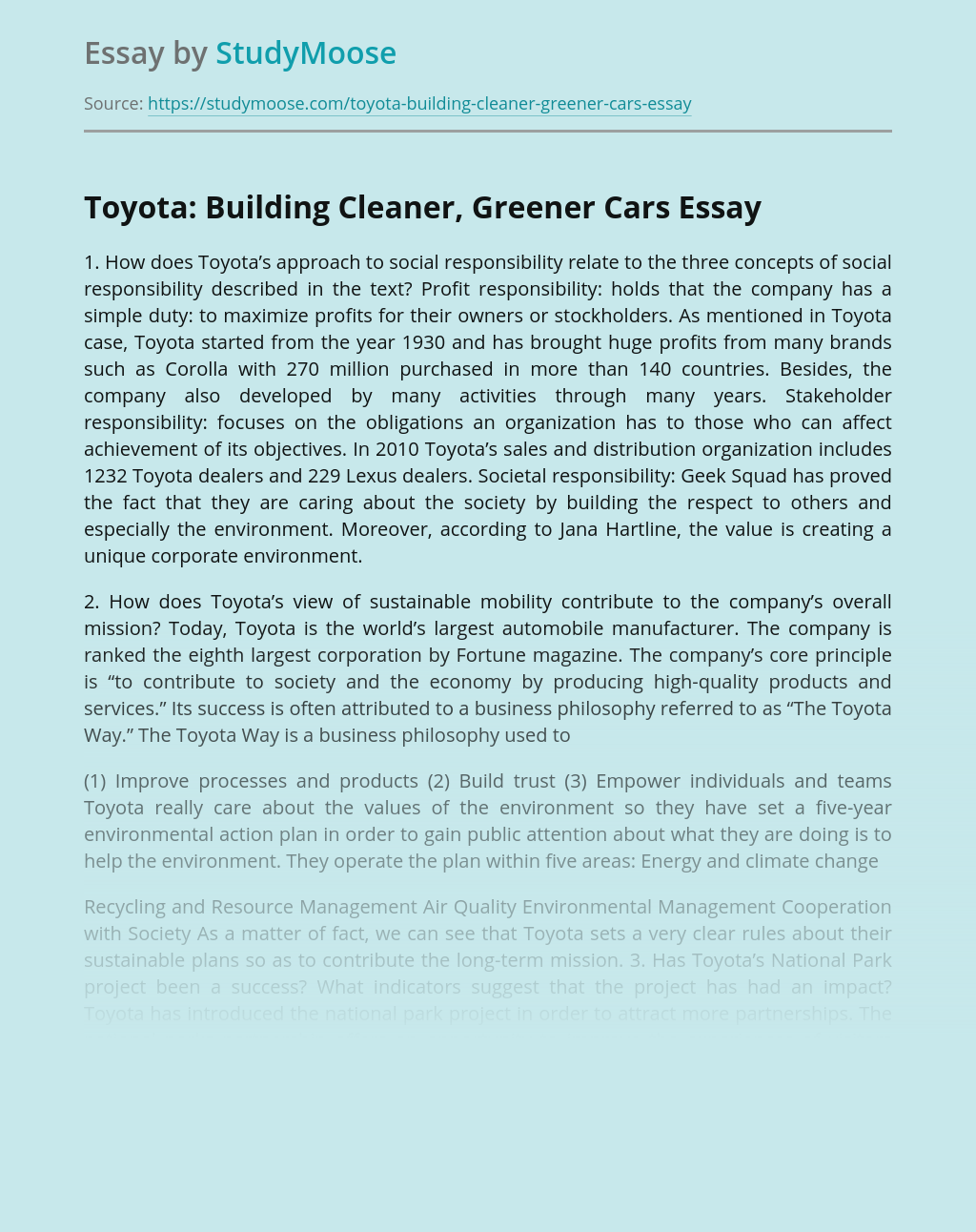 When we look at the history of Fuzzy Logic, we find that the first person for its development was Buddha. He lived in India in about 500 BC and founded a religion called Buddhism. His philosophy was based on the thought that the world is filled with contradictions, that almost everything contains some of its...

According to the article of Grace Melanie Lacamiento 2012 entitled Mobile apps could be huge export product for Phl, the tremendous growth of Smartphone usage in the country make the creation of mobile applications a lucrative option that local developers and start-up technopreneurs should look into. Alvin Gendrano, director of Microsoft Philippines Developers and Platform...

1. Which of Schwartz’s 10 values are driving the habits of supervisors at Bain & & Business, House Depot, and Best Buy? Offer examples to support your conclusions. Bain’s management is driven by he Schwartz’s values of power and self- direction. In a downturn, he chose to go against the grain and take benefit of...

1. What hope of Octavius and Antony is addressed? What does this state about Brutus? B and C have concerned Philippi and their hopes have been responded to. Also, they are boiling down the valley — not taking the high ground. It suggests B made a bad option leaving Sardis. 2. What does Cassius mean...