Why did Totalitarian Regimes achieve power in Europe in the first half of the 20th century?

Totalitarianism is political systems, which one political party is in power and have rights over public and private matter. In the beginning of the 20th century most country with the exception of France, Switzerland and Czechoslovakia was ruled by a King or Queen. The monarch either is a Democrat allowing a Parliament or an Autocrat having unlimited power without anyone holding them back. These weren’t working as well as it should, as people weren’t happy. Consequently comes the failure of their system Economically, Politically and Socially.

Don't use plagiarized sources. Get your custom essay on
“ Why did Totalitarian Regimes achieve power in Europe in the first half of the 20th century? ”
Get custom paper
NEW! smart matching with writer

With the current system failing, new ideas fly around with strong leaders ready to lead them. Now that all this is prepared, a trigger is needed for a revolution.

After a successful revolution, the power that is newly achieved must be kept, no matter at what cause it must be kept. The government must be willing to use unlawful method to keep the power. The power must be kept and the leader should aim to strengthen it even more.

After the Great War was over these things happen in almost everywhere in Europe and after they came to power, they worked and were better than the ex-government. That’s why Totalitarianism was so powerful in the first half of the 20th century.

40+ millions were the number of casualties after WWI. Allied Power defeated the Axis; this brought an end of German, Russian, Ottoman and Austro-Hungary Empire. It also resulted foundation of Czechoslovakia, Estonia, Latvia, Lithuania, Poland, Finland, Turkey and Ukraine. The Germans have to sign the treaty of Versailles.

The war had a huge impact on Europe, as it fought there. Economy collapsed, Money devalued, Workers Shortage, Starvation was common throughout European mainland.

For 304 years the Romanov ruled Russia. The Czar or Czarina have power over everyone and no one can do anything with that hence being autocrat. By 1907 Russian Empire was the second largest on earth but a decade later she was on her knees. Czar Nicholas II declared war with Japan in 1905 and brought Russia into WWI in 1914. His army were ill equipped, ill fed and ill trained, and they were mostly peasants who know not how to use a rifle. Out of the casualties almost 1/8 were Russians. 700 factories got closed down when they couldn’t afford the wages anymore.

The war made the rich richer and the poor poorer. Rouble got devalued as economy is starting to collapse. Starvation is throughout the country as it cost much more after the Rouble got devalued and the transportation froze down at -35ï¿½F leaving the vast land unreachable.

Germany started the war and came out losing it was facing trouble at home in 1919. The treaty of Versailles had weakened them so much. By signing the treaty she lost the Chancellor, the Marshal, land ceded to France, all her overseas colony, her army, navy, air force and money to repay for the damages she done.

“What hand would not wither that binds itself and us in these fetters?” was asked by Phillipp Scheidemann before he resigned.

People were so dissatisfied with the government. They were jobless living in the street and to buy a loaf of bread it would cost a basket full of German Mark. USA did make life a bit easier as they offered cash aid from 1924.

Communism was an idea of Marx who stated that society should equal. Bolsheviks and Mensheviks were both communist but were split by 1903. Both 1905 and 1917 revolution were by Bolsheviks hence making them look stronger than the opposition and it was them who later got power after the October revolution.

Fascism was an idea of restoring the country that was once great back again. They say that the country is polluted by foreign race and must be rid of those in order to be great again. It is normally led by a dictatorship. He had total power over the government and people. Fascism appeared in Europe before WWII because most people were scared of Communism and that democracy was too weak. Fascism and Communism are both a form of Totalitarian but the main different is that fascism doesn’t force people to give away land or factory but they usually get close to those who own them.

Communism was led by Bolsheviks party existed since 1903 following a break away from the Mensheviks. Lenin was their leader. They came to power after the successful October Revolution. After that they changed their name to the “Communist Party”.

Fascism was spread throughout Europe with notable dictator such as Hitler for the Nazis, Mussolini for Fascist Italy, Franco for Spain’s Falange and Salazar for Portugal’s Estado Novo.

Having leader and idea weren’t good enough. To get in power you need to acquire it. If they won’t give you power easily then you need a revolution. To have a revolution there need to be a trigger for it.

A trigger for Lenin came when Russia were involved in many wars losing huge amount of land which resulted great numbers of casualties. People lose trust for the Czar and wanting something better. Then comes the 1905 Revolution, February Revolution and lastly after Nicholas abdicated the October Revolution. It happened elsewhere in Europe when the

1932 election for Germany turned out to be a disaster as the Nazi was outvoted. Paul von Hindenburg was re-elected. He later agreed to appoint Hitler Chancellor of Germany 1933.

1926 Portugal when it’s economy, overseas territory were giving them trouble at home and from an invasion threat from Spain. The first Republic wasn’t strong enough. The 28th May Revolution broke out. From 1926 to 1974 Portugal have risen from a very poor country into one of the leading European nation and the last to have a grip on its Empire.

Why did Totalitarian Regimes achieve power in Europe in the first half of the 20th century?. (2020, Jun 02). Retrieved from http://studymoose.com/totalitarian-regimes-achieve-power-europe-first-half-20th-century-new-essay 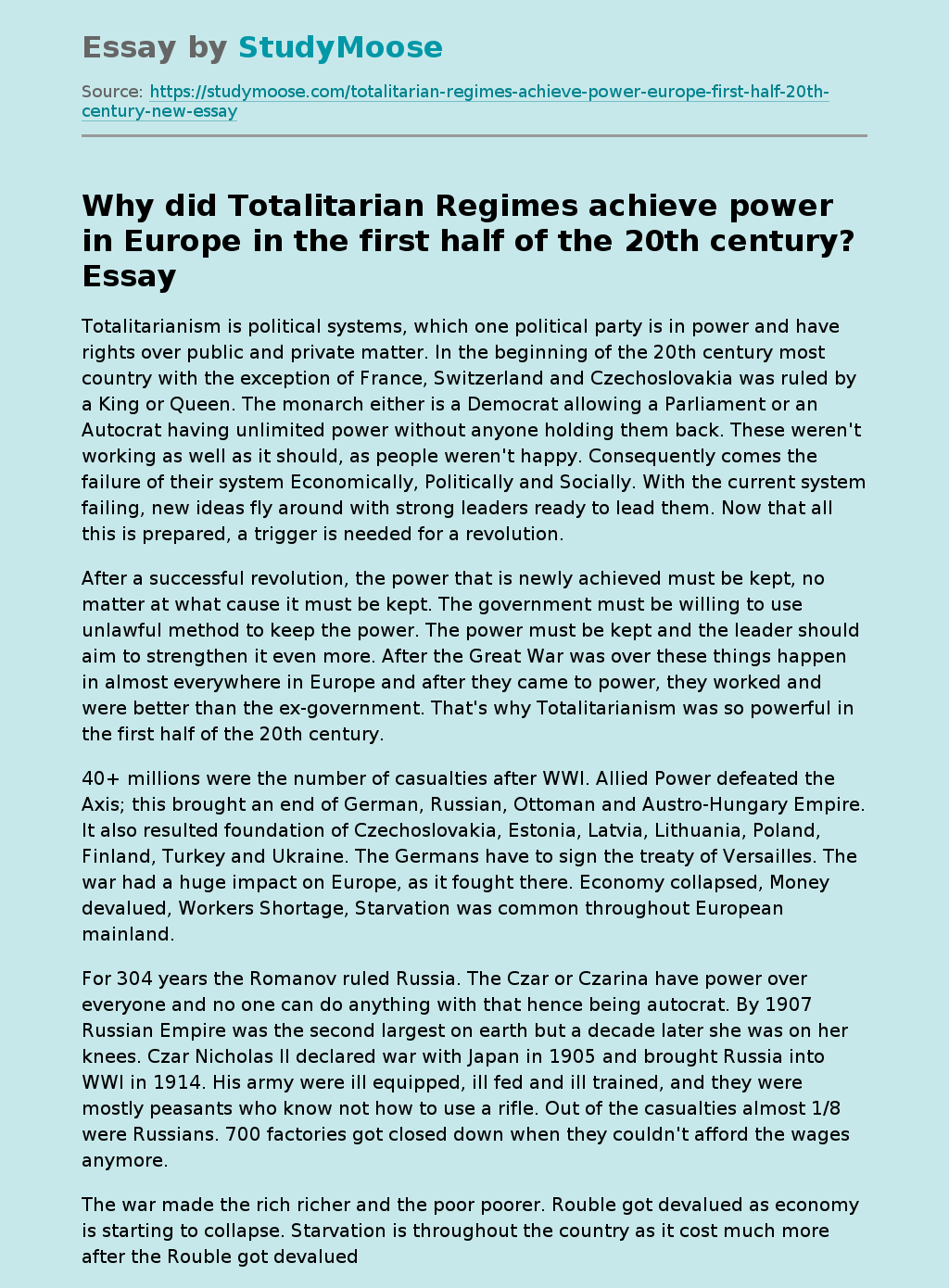